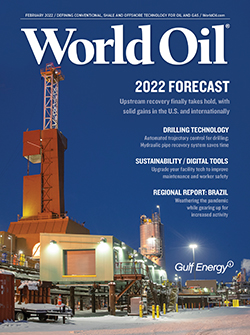 Jim Redden
A major artic blast came with the new year across the Eastern United States, leading to a spike in natural gas prices on top of already multi-year highs in a volatile market. For now, most producers in the Marcellus and Utica shales across the Pennsylvania, West Virginia and Ohio fairway are refraining from exponential drilling and production growth.

Donald Ross
Long an industry challenge, the electrification of offshore infrastructure enables use of renewable power and simultaneously creates a natural path to digitalization and further environmental impact reduction. This paves the way for the reinvention of offshore oil and gas production.

Mike Slaton
Considering its wobbly production, Brazil is doing pretty well in weathering the pandemic. Results of the rescheduled 17th Bidding Round for exploratory acreage were termed successful, although only five of 92 offered blocks were sold.

Upgrade your facility tech to improve maintenance and worker safety

Rama Sreenivasan
Digital transformation can help combat climate change impact on oil and gas facilities and workers, but the industry has been slow to adapt. In a tech-based future, companies need to invest in digital options like WiFi boosting, drone technology, and remote inspections.

Staff
U.S. oil production decreased mildly during 2021. A surge in gas prices during 2021 was influenced by increased demand despite Omicron and geopolitical unrest in Europe.

Staff
The average U.S. rig count for 2021 increased almost 9% from the previous year, though companies remained cautious with ramping up drilling activity.

2022 Forecast: Positives try to outweigh the negatives in Canada’s upstream

Robert Curran
As the global economy recovers from the pandemic, indicators have shifted to a positive outlook for the first time in many years. But politics, especially in Canada, have cast a pall over any potential turnaround for the Canadian industry.

2022 Forecast: Oil and gas in the crosshairs

James West
Worldwide E&P spending is set to increase 16% in 2022, extending the 5.5% growth experienced in 2021. The first coordinated global upturn since 2018 will be led by North America, but ambitious capacity growth targets in the Middle East, Latin America and Africa will drive international capex gains.

Staff
Every region will post an increase, led by the Middle East, the Americas, Africa and the FSU. Offshore activity will grow at about the same pace as onshore drilling.

First Oil: What a difference a year makes

Kurt Abraham
While last year Covid seemed to be withering away, this year Covid is still around but definitely on the decline. Spot prices are high enough for everyone to make a profit, and then some, averaging lately in the high $80s to low $90s (perhaps too high).

Oil and gas in the capitals: The new realities of energy markets

Dr. Anas F. Alhajji
The year 2021 witnessed unprecedented development in the energy markets. Such events were contrary to conventional wisdom and have ramifications for the oil markets, for years to come.

Mark Patton
Opponents of the European Commission's move to label nuclear energy and natural gas as “green" have accused them of "greenwashing." Let’s dig into the importance of this move and why this is a battle we can’t lose.

The last barrel: The Trifecta for U.S. gas producers

Craig Fleming
The abundant supply of natural gas in the U.S is starting to pay dividends, in spades. The U.S. became the world’s number-one exporter of liquefied natural gas for the first time ever in December.

Willard C. (Bill) Capdevielle, P.E.
I guess it goes without saying that the oil and gas industry depends a great deal on fluids flowing from one location to the next, to be captured, processed, or otherwise monetized. Sounds simple, yes? Well, it turns out—not so much.
Resources

Craig Fleming
Tensions between Russia and Ukraine, combined with surging demand, caused oil prices to increase approximately 20% this year, with WTI and Brent hitting $90.61/bbl and $96.43/bbl, respectively, in February.