I guess it goes without saying that the oil and gas industry depends a great deal on fluids flowing from one location to the next, to be captured, processed, or otherwise monetized. Sounds simple, yes? Well, it turns out—not so much.
Willard C. (Bill) Capdevielle, P.E. / Contributing Editor

I guess it goes without saying that the oil and gas industry depends a great deal on fluids flowing from one location to the next, to be captured, processed, or otherwise monetized. Sounds simple, yes? Well, it turns out—not so much. We production folks have a variety of gremlins to contend with—full or partial plugging of tubulars with hydrates, waxes and asphaltenes, scale, or micro-organisms—to name a few.

In my December 2021 column, I presented how nanotechnology has helped in preventing the deposition of micro-organisms in power plant heat exchangers, in Hawai’i. Also, in my October 2021 column, I presented how nanotechnology-enabled functionalized surfaces can help in preventing corrosion and reducing the friction-induced pressure drop of fluid in pipe and tubing. As promised, there’s more!! 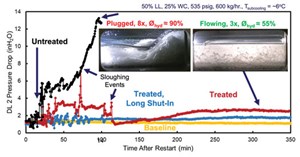 Problem!! (actually two problems): 1) These chemicals must be injected continuously throughout the life of the field or facility—or for however long the problem is expected to exist, making a significant hit to operating expense; and

2) The required injection point may be difficult to access—such as downhole in a well, or in subsea facilities, resulting in a potential hit to capital expense.

So, rather than treat the fluids, let’s treat the pipe, tubing, and all the equipment involved. Oceanit, one of my go-to, innovative technology solutions companies, has an effective solution ready to go. In December, I discussed their omni-phobic HeatX™ product, developed specifically for heat exchangers and condensers globally. They also offer a similar omni-phobic DragX™ product, a surface treatment optimized for pipe and tube surfaces, to increase flow efficiency and protect the surfaces from corrosion and depositions.

Being omni-phobic, DragX™ minimizes the ability of both oil and water to contact the pipe (or process vessel) wall. It could easily be concluded that if water not touching the pipe wall can prevent corrosion, it also will prevent the deposition of scale and hydrate. These substances may still form under the proper circumstances, but they would not adhere to the pipe wall and cause plugging. Similarly, waxes and asphaltenes may form, but they would not adhere to pipe walls. These “bad actors” could be more efficiently managed further down the production system—on the surface, for example.

DragX™, which was developed in conjunction with the Department of Energy’s (DOE) National Engineering Technology Laboratory (NETL), successfully demonstrated the ability to prevent the deposition of both hydrates and asphaltenes on treated surfaces. Hydrate flow loop results (Fig. 1) showed that untreated pipe sections would plug with hydrates, while DragX-treated sections experience hydrate sloughing events, but no hydrate plugging.

DragX™ forms a permanently bonded, ultra-thin film onto pipe surfaces with minimal surface preparation. It has been shown to bond to, and cover, corroded pipe. It can even be applied to existing pipes in-situ. It is water-based and non-toxic and has a cure time of less than 2 hr.

So where was this stuff when I was operating subsea wells?

About the Authors
Willard C. (Bill) Capdevielle, P.E.
Contributing Editor
Willard C. (Bill) Capdevielle, P.E. has 45 years of upstream industry experience. He has held various technical and managerial positions and is retired from both Mobil Oil and Hess. Bill has spent equal portions of his career supporting producing operations, in upstream technology centers, and in capital project support.
Related Articles FROM THE ARCHIVE