With the havoc created by the war in Ukraine and the hard push to convert to renewables, operators are once again focusing on the high ROI that offshore prospects offer. There is an onslaught of good news and positive indicators that suggest operators are poised to significantly increase offshore development in 2022.

With the havoc created by the war in Ukraine and the hard push to convert to renewables, operators are once again focusing on the high ROI that offshore prospects offer. There is an onslaught of good news and positive indicators that suggest operators are poised to significantly increase offshore development in 2022. 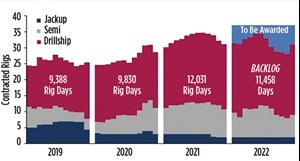 An analysis by Westwood Global Energy reveals year-on-year growth for the global offshore rig market at the close of 2021, up 200% from 2020. This has been bolstered by significant engineering, procurement and construction (EPC) spending, closing last year at $41.7 billion, close to 2019 levels. Further analysis shows that global rig contract fixtures, including options exercised, totaled 142 during fourth-quarter 2021, representing 54,829 rig days, a 155% increase compared to the previous quarter, adding much-needed optimism following a period of turbulence.

However, industry growth is globally uneven with Africa, Southeast Asia and the North Sea falling behind, due to the pausing of major drilling projects in response to political and legal uncertainty. “For these regions, contracted rigs have been on a downward trajectory, hitting rock bottom at the close of 2020. Drilling projects have been halted amidst uncertainty; however, there are several major projects on the horizon that could help drive a recovery,” Middleton concluded.

Sub-Saharan Africa rebound. Untapped natural gas supplies in Sub-Saharan Africa are set to surge this decade, with output more than doubling from 1.3 MMboed in 2021 to 2.7 MMboed in 2030, due to vast undeveloped deepwater resources (Rystad Energy). While deepwater developments have played a crucial role in the region’s liquids output to date, averaging about 50% of annual production, natural gas output from such fields has been minimal. That is expected to change, as gas from deepwater reserves will surge in the coming years. Production from deepwater developments will increase from 120,000 boed in 2021, or 9% of total output including shelf and land production, to 1 MMboed, accounting for 38% of total output.

As global demand for gas continues to rise and importing countries suffer supply shortages, the production outlook for the region is promising. Deepwater production is projected to grow further in the 2030s, with gas output more than doubling in five years to 2.1 MMboed by 2035. Gas from shelf and land reserves will increase by 2035 and contribute about 46% of the expected 4 MMboed of total gas output from the region, based on estimated recoverable reserves, development timelines and plans.

“Production in Sub-Saharan Africa is expected to increase significantly in the coming years, with natural gas output in particular set to see a boom in output. Although there have been notable onshore finds, the development of deepwater offshore resources is going to usher in a period of rapid growth for the region,” says Rystad analyst Siva Prasad.

Another victory offshore Suriname. TotalEnergies reported a significant new oil discovery at the Krabdagu-1 well, in Block 58, offshore Suriname. The well encountered approximately 90 m of net oil pay in good-quality Maastrichtian and Campanian reservoirs. “This successful exploration well at Krabdagu-1 is a significant addition to the discovered resources in Block 58. This result encourages us to continue our exploration and appraisal strategy of this prolific region to identify sufficient resources by year-end 2022 for a first oil development,” said TotalEnergies V.P. Kevin McLachlan.

Embracing change/lowering GHG emissions. The electrification of offshore infrastructure will enable use of renewable power to simultaneously create a natural path to digitalization and further environmental impact reduction. It also paves the way for the reinvention of offshore oil and gas production, says Donald Ross president of Production Systems at Schlumberger. “With an accelerated focus on the strategic priorities of capital stewardship, digitalization and sustainability, the industry needs to fully embrace change strategies. Electrification of infrastructure, and the deployment of all-electric systems, provide the step-change in reservoir access, control and performance, in addition to the environmental sustainability required to deliver lower-cost and lower-carbon energy production,” Ross continued.

“All-electric systems will enable offshore operators to take a systems approach to reduce environmental impact by lowering the overall carbon intensity per barrel produced; enhance production and recovery through enhanced reservoir access and control; reduce total expenditures and accelerate time to first oil. Through an open collaborative approach to asset performance enhancement, the industry can address the imperative of meeting current and future demand for oil and gas in a manner that reduces the carbon footprint and also ensures returns-focused performance—and will play a critical role in defining the future of offshore oil and gas production,” Ross concluded.