Technologies to enable subsea electrification for a topside free environment

All-electric systems are vital for the future of subsea operations in the energy transition.

Electrification, all around. That’s certainly how it looks and feels, in our day-to-day lives, and within certain spheres of the subsea oil and gas industry, too. There’s a good reason for all that talk. The use of electrified subsea control systems instead of hydraulic equivalents can contribute to solving some of the most pressing issues facing operators today; namely lower OPEX, minimal CAPEX, and a significant reduction in the carbon intensity of operations, in order to improve our blue economy.

Away from hydraulics. The subsea electrification conversation is not just about removing significant hydraulics from subsea infrastructure—more about that later. But when zooming in on hydraulic removal, in effect we take the basic principles of electrohydraulic-control (EMUX) subsea systems that are currently used for instrumentation, and low-power controls, but boost their power to provide primary-drive to perform more intense tasks, such as opening or closing major valves. 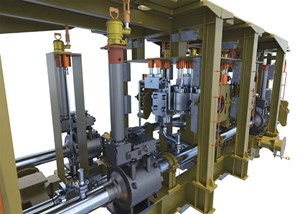 Benefits can be realized from simply changing some of the functions from hydraulic to electric. Removing hydraulics from the manifold offers a significant reduction in CAPEX; electrifying the choke valve can provide much-finer control to enhance production; and utilizing closed-loop self-contained valves on gas lift or carbon-capture utilization and storage applications can give greater control of the injection fluids, reducing OPEX.

By simply taking out the hydraulics, the new electric systems also take out a lot of the high-grade stainless steel from manufacturing, transportation, installation and operation of subsea umbilicals. Lighter-weight pipes with less low-pressure/high-pressure redundancy strip out both costs and carbon emissions from greenfield sites.

When the volume of piping is reduced, so is the need to distribute and manage it through the manifold, as well as demand for auxiliary equipment like hydraulic stab plates. Operators can go further and deeper—and with longer offsets—for less outlay than traditional hydraulic controls have allowed to date.

Interest picks up. This technology is not new. The first subsea electric tree was built back in 1994 by Vetco Gray (now part of Baker Hughes), although this was never installed. The first installation occurred in 2006, and it has been the topic of discussion since the early 1990s—albeit within much smaller industry circles. In the following years, it barely gained any traction, due to the industry’s lack of appetite to take risks on new technology—until now. Having stuttered along a path of almost imperceptible acceptance, subsea electrification is experiencing a sudden exponential growth in interest and engagement. This is due to requirements in areas such as:

Together, all of these incremental steps have reduced the risk profile of subsea electrification perceived by the industry. Companies, such as TotalEnergies, have announced their ambition to make all new systems electrified, and Equinor has made similar commitments that it will be electrified by 2023.

The number of fully funded joint ventures and multi-million-dollar investments being announced suggests that they are not alone in appreciating the possibilities of subsea electrification and its potential to help meet current concerns of the industry and its wider stakeholders. Designers of industry specifications have already started to issue “all-electric” regulations, requirements, documents and industry standards to adopt. The American Petroleum Institute committee has promised to release drafts in the near future.

Gathering evidence. At Baker Hughes, we believe that subsea electrification delivers on operators’ key concerns when it comes to capital, operating and carbon costs, and that the time is right for this technology to enter the mainstream. Nonetheless, the business case is not always clear to all operators, and it needs to be stated robustly: no new technology can be introduced without the necessary evidence—especially safety and reliability—behind it, even when the general opinion appears to have embraced it.

So, we undertook to investigate and thoroughly analyze the potential savings available, as well as the ways in which operations could be optimized, when using electrified control system technologies instead of a conventional, electro-hydraulic approach. And rather than picking a site that was already known to be an optimal location for electric systems, we worked with partners to select a site that would be a credible example of a more typical subsea installation. The chosen site was the SNEPCO Bonga Main field, Nigeria’s first 1,000-m-plus, deepwater development, which has been producing oil and gas since 2005.

The study comprised a single production loop within part of Bonga Main field. It encompasses two production manifolds, and associated wells, control system and water-injection wells. The hypothetical project was assessed, as it would be for a new subsea electrified system, with real-world specifications and costings—and the results were conclusive.

CAPEX savings. Extensive analysis showed a 9% saving in subsea hardware costs at system level. Those savings come from several sources: for example, the costs of umbilical systems were 30% lower with electric systems, and control systems were 24% lower, as was testing. The slight increase (less than 1%) in the cost of subsea production tree systems was easily offset by savings in wellhead systems, structures, distribution systems, intervention and tooling. There is no doubt that, in terms of CAPEX, the subsea electric system handily beats traditional hydraulics.

Calculating operational costs is less straightforward, given the variables involved. Nonetheless, the study shows that the main benefit of using the electric approach is that start-up times for trees are significantly reduced. Drawing power from local energy storage modules (ESMs) for valve operations allows multiple trees to be opened simultaneously, which could enable operators to restart systems in much less time, compared to the conventional approach. Interestingly, those start-up times are lower than what is often practical, desirable or safe: a case of modelling outperforming reality, and something that operators will need to consider when weighing up the benefits for their own fields.

Operational benefits. The study also indicates other areas in which the removal of high-pressure fluid systems and rotating machine parts of the hydraulic power unit (HPU) can deliver notable benefits to operators. Firstly, system availability is likely to improve, as repair demand goes down. Additionally, as hydraulic systems tend to be one of the main causes of downtime in subsea systems, the potential is there to significantly improve production availability. In addition, operators can reduce leakage pathways and marine operations—along with the risk of incorrect or faulty installation. All of which suggest reduced OPEX and increased production availability.

Operators can also expect to see inspection, maintenance and access requirements go down, reducing staffing requirements for interventions, especially in hazardous areas. Finally, removing the HPU and associated fluid systems also removes fluid releases and their environmental impacts, both topside and subsea. Clearly on the other side, subsea insulation resistance reduction in electrical systems is also a concern, and the qualification and testing of the electrical connectors needs to be managed closely.

Fit for the future. Finally, the report looked at how the advantages of subsea electrification can be enhanced further by digital tools that deliver data access, visualization, monitoring, and diagnostics and prognostics, and which pave the way to more predictive maintenance. All these actionable insights that digital infrastructure offers would also be available on subsea electrified systems. Not only does this improve availability of the system, and support de-staffed, autonomous operations, it enables future-focused decision-making to support the longevity and sustainability of the overall subsea system.

For operators, facing tight margins, a changing investment landscape, an imminent skills shortage and unprecedented political scrutiny, there is little room for experimentation. Equally, there is little future in business as usual. Caught between these opposing pressures, operators and their providers need to think differently—and they need the evidence to support that. The evidence is now in on subsea electrification. And it’s irresistible: subsea electrification is the future.

Transition to energy frontiers with all-electric. We at Baker Hughes view all-electric technologies expansion as a critical-enabler for real step-change in cost, blue-economy consciousness, and trust and interdependency from system intelligences. Furthermore, we perceive the all-electric system as a central part of the tapestry for the Baker Hughes energy-frontier horizon transition, too. 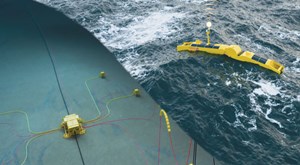 We have ventured to look beyond this electrified core, to a true, full-electric system offering, removing all chemical injection topside, any subsea HPUs, and utilizing electric surface-controlled subsurface safety valves (eSCSSVs). By stepping into an operational world where there are zero hydraulics, and a higher dependency on electrical power, the role of the tethered, traditional umbilical systems and topside platform comes more heavily into focus, especially for long-offset and deepwater applications.

Uniting other leading peripheral technology developments and supporting capabilities, renewable power-generation at source, connectors, and communication protocols, we vehemently believe that the zenith of an all-electric, truly topside free system is no longer the stuff of “dreams and science-fiction” but is within reach with today’s technologies, Fig. 2. This enablement is the genesis to laying out the possibilities of reconfiguring common system elements to service the energy frontiers that lay just beyond the hydrocarbon horizon.

Matt Lamb is the SPS systems product manager for deepwater, long-offset and all-electric applications. He is responsible for shaping and delivering cohesive and innovative multi-generation system strategies for the company to sustainably answer current, adjacent and frontier energy market needs. Previous posts for Baker Hughes included leadership roles in supply chain, operations/manufacturing and program director positions. His sector experience spans six years, his previous 11 years in aerospace, having formally delivered in several manufacturing and customers facing roles within Rolls-Royce aero engines and GE Aviation, and most recently as a consultant in business management and strategic change. Mr. Lamb earned a first-class honors degree in engineering and holds charterships in both engineering and leadership disciplines.