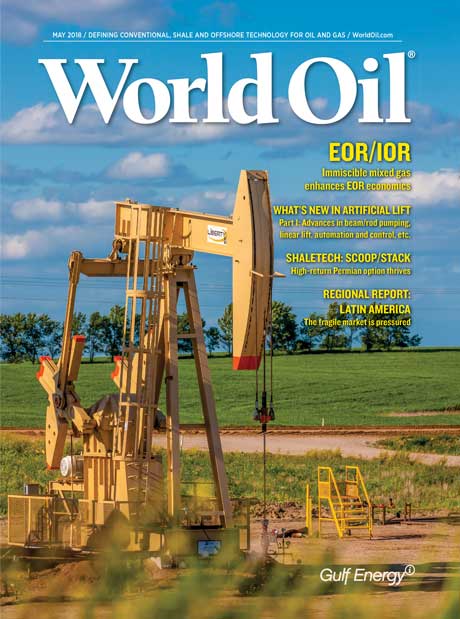 P. Trost J. Wright
A mixed gas (CO2, N2, CO) is uniquely applicable for increasing matrix permeability and enhancing oil recovery rates. It also decreases the Mcf/bbl ratio and increases the mobilization of asphaltenes while operating at immiscible conditions on oils ranging from 18° to 42°API.

A practical approach to fluid integrity management in secondary recovery

Les Robertson
A waterflood system’s success ultimately depends upon formation geology and the mobility ratio of the produced oil and injection water. Both new and mature waterfloods can benefit greatly from improved fluid integrity management, as demonstrated in a maturing waterflood in eastern Kansas.

Emily Querubin
Despite the rise in crude prices, many Latin American countries are still grappling with considerable debt and declining production rates.
Columns

William J. Pike
Not that many months ago, I wrote about bots, particularly chat bots, that are evolving as a threat to our day-to-day operations.

William (Bill) Head
Rising oil prices, along with shale being over-extended, and world reserves declining, are requiring companies to look to exploration again.

Jeff Moore
On April 3, Vietnamese state firm, PetroVietnam, issued the following and unusually blunt statement on its website: “The East Sea is forecast to continue to have uncertainty this year...affecting the company’s efforts to attract foreign investors to invest in its open offshore fields.”

Renee Comstock
The Permian basin’s output is forecast to reach 3.18 MMbopd in May, according to EIA, and it is widely anticipated to become the world’s largest oil patch.

Craig Fleming
If Edwin Drake would have drilled his 75-ft oil discovery well in northwestern Pennsylvania, down another 3,900 ft, he might have discovered vast quantities of natural gas in the Marcellus shale.
News and Resources

Emily Querubin
Gulf Publishing Company, publisher of World Oil, has rebranded to Gulf Energy Information (Gulf) to better reflect the scope of its offerings across the upstream, midstream and downstream sectors of the international oil and gas industry.

Craig Fleming
The crude price recovery, buoyed by potential Middle Eastern supply risks, was capped by rising U.S. inventories while President Trump debated on whether to reimpose sanctions on Iran.

Emily Querubin
Aquaterra Energy has completed the delivery of a Sea Swift conductor supported platform (CSP) for DeNovo Energy in the Gulf of Paria, offshore Trinidad and Tobago.