Although there are some hopeful signs that a recovery may be on the way for Canada’s oil patch, the ongoing global pandemic, misguided politicians, and skittish markets have left producers wary and risk-averse.
Robert Curran / Contributing Editor

A sustained rally in oil prices this year has put a little pep back into the step of Canadian producers, Fig. 1. But the optimism may be short-lived after Canadians returned Prime Minister Justin Trudeau to power with another minority government. This was after the PM called a snap election, hoping to catch his opponents off-guard and capture a majority. The election call, in the middle of a fourth wave of Covid-19 and roundly criticized as a cynical power grab, did little to change the political landscape, with the number of seats won by each party largely unchanged. 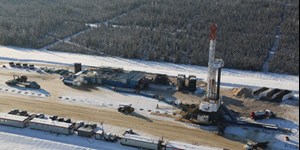 Fig. 1. Sustained, higher oil prices have helped to encourage greater drilling activity in Western Canada. Overall, Canadian activity should be up more than 40% from the trough of 2020. Image: Akita Drilling Ltd.

Federal policies. The oil and gas industry’s relationship with the federal Liberals has always been an uneasy one. On one hand, the feds stepped in and purchased the beleaguered Trans Mountain Pipeline from Kinder Morgan for $4.5 billion in 2018. On the other hand, they stood idly by as an estimated 150,000 people lost their jobs in the oil patch, primarily in Alberta.

During the election campaign, the liberals also promised to allocate C$2 billion to assist oil patch workers in transitioning to other careers. For communities that were built by oil and gas resources, retraining is cold comfort. But given how low the bottom of this cycle was a year ago, even a mixed bag would be welcome for many producers.

Federal debt has skyrocketed under Trudeau’s Liberals, as the federal government has attempted to spend its way out of the Covid-19 crisis. As a result, this administration, seemingly oblivious to the impact on future generations, has obliterated all previous expenditure levels, and exceeded C$1 trillion in debt earlier this year.

Adding to the confusion about how best to proceed is how federal (and some provincial) policies appear to be at odds with international supply/demand estimates for crude oil. The International Energy Agency is predicting continued demand growth for the foreseeable future, but it also has issued its “roadmap” to achieving net zero emissions by 2050. Net zero appears to be the most reasonable path forward and could position Canada as a world leader in technological innovation, responsible development, and specializations like CO2 capture. However, the report notes that reaching this goal would have far-reaching implications for resource-rich countries like Canada.

Unfortunately, governments haven’t typically been as measured in their announcements. The federal Liberals, for example, announced late last year that by 2035, all new cars and light-duty trucks will be electric. Given the sheer size of Canada, and the lack of EV infrastructure, it’s a virtually impossible goal, even with more massive government intervention in the marketplace.

Alberta’s actions. Meanwhile, Alberta has responded by investing heavily in big-ticket industry projects. Premier Jason Kenney’s government has been under fire for its forays into the markets, including an ill-advised purchase of a portion of the Keystone XL pipeline, which ended up costing the province C$1.3 billion. And this past July, they announced they would take a 50% stake in the 79,000-bpd diluted bitumen Sturgeon Refinery, located just north of Edmonton, which has been plagued by cost overruns and operational problems. The true cost of the deal is difficult to ascertain, as the refinery has a complex relationship with the Alberta Petroleum Marketing Commission, a governmental agency that posted a $2.7 billion net loss for the year, due to its “onerous” contract with the Sturgeon Refinery, according to the province’s annual report. Both deals have been widely criticized as short-sighted and costly.

East Coast offshore. Adding further to the mixed messaging were two recent announcements from Canada’s East Coast that may bode well for the White Rose and Terra Nova projects. Suncor Energy Inc. has announced it will boost its stake in West White Rose, conditional on a restart evaluation for the West White Rose project by mid-2022. If the project is restarted, Suncor will increase its stake from 27.5% to 40%. 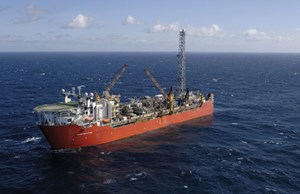 Fig. 2. In East Canada, the newly restructured Terra Nova ownership group has agreed to extend the life of the Terra Nova project by 10 years, adding another 70 MMbbl of production from the Terra Nova FPSO. Image: Suncor Energy Inc.

At Terra Nova (Fig. 2), the ownership has been restructured to just three owners: Suncor (48%) Cenovus Energy Inc. (34%) and Murphy Oil Corporation (18%). The new-look group—previously there were six owners—also has agreed to extend the life of the project by 10 years, adding another 70 MMbbl of production. The agreement also includes financial and royalty support from Newfoundland and Labrador of up to C$205 million.

Western Canada. In western Canada, some industry players have responded to adverse market conditions and political policies by repositioning themselves as “energy” companies, rather than just hydrocarbon producers, as they expand their energy portfolios and embrace carbon storage and other “green” technologies, like wind and solar power.

Lack of market access continues to be an issue for Canadian producers, although the burgeoning crude-by-rail industry has reduced that pressure significantly. After falling off due to the implementation of strict Covid measures in 2020, crude-by-rail deliveries have ramped up again in 2021, exceeding 130,000 bpd in June 2021, according to the Canada Energy Regulator.

Notwithstanding the rhetoric, uncertainty, and outright hostility facing the industry, production at Alberta’s massive oil sands deposits is seeing some ups and downs, but largely continues unabated. Recently, Japan Petroleum Exploration Co. (JACOS) announced it was seeking a buyer for its 75% stake in the 23,000-bpd steam-assisted Hangingstone oil sands project, which could fetch up to C$200 million. Hangingstone began production in 2017. So, up steps Greenfire Acquisition Corporation (GAC), with financial backers McIntyre Partners and Griffon Partners, announcing the acquisition of JACOS, including the Hangingstone site.

Meanwhile, Imperial Oil Limited recently announced that it achieved operational improvements at its Kearl oil sands project and that it was implementing a new strategy to extend intervals between turnarounds. The result should increase its output to 280,000 bpd, according to the company. Kearl’s total gross production was 255,000 bopd during second-quarter 2021.

Mergers and acquisitions activity is trending toward consolidation at this time, as more active producers bolster their portfolios through cash, shares, and assumption of debt. Tourmaline Oil Corp. has been one of the busiest. In June, Tourmaline acquired privately owned Black Swan Energy Ltd. for C$1.1 billion, including 26 million Tourmaline common shares and the assumption of net debt of up to a maximum of $350 million. Tourmaline also purchased of 50% of Saguaro Resources Ltd.’s assets for $205 million and a joint venture to further develop the Saguaro assets.

And in June, Surge Energy Inc. picked up all shares of privately held Astra Oil Corp. for approximately $160 million. The transaction was funded by issuing common shares of Surge and assuming approximately $15 million of net debt. Astra’s main producing properties are light oil in southeastern Saskatchewan.

Capex. With the uptick in oil prices in 2021, producers are realizing a significant boost to their results, which also means spending is getting back to a more typical level, compared to the extreme lows of 2020.

Suncor Energy leads the pack, with planned expenditures of approximately C$4.5 billion, an increase of 9% over 2020 levels. Canadian Natural Resources Limited has increased spending by almost 19% over last year, at just over C$3.2 billion. Cenovus Energy Inc., partially driven by its acquisition of Husky Energy last year, expects spending could reach C$2.7 billion, an increase of 213% over 2020. Tourmaline has projected capex to be C$1.27 billion, up 43%, and Imperial has said it will spend C$1.2 billion, up 50% over last year.

Land sales. Strong commodity prices have translated into Western Canadian land sales being reinstated in 2021, and they have recovered somewhat from the virtually non-existent levels of 2020. It remains to be seen what the impact will be to activity in the future, but some sort of uptick in holdings will be necessary, if any long-term recovery is to occur.

Once again, comparisons are pointless until activity resumes something close to normal levels. Through the first half of 2021, Alberta has collected C$50.9 million, with an average per-hectare price of approximately $220. In British Columbia, the province cancelled its summer land sales after bringing in just $3.8 million ($660.26 per hectare). And in Saskatchewan, land sales totaled $2.7 million, or $205.51 per hectare.

Drilling numbers have yet to show any recovery in 2021, although the spending guidance for most producers indicates it could be a busy winter drilling season. Producers drilled just 1,831 wells through the first half, down 4.7% from 2020, according to Daily Oil Bulletin records. However, June recovered strongly, year over year, a promising sign. 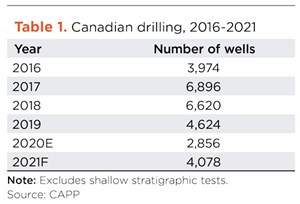 According to World Oil survey results, most provinces are predicting drilling will increase this year. The Canadian Association of Petroleum Producers is forecasting a significant increase, to 4,065 wells drilled (Table 1) across Canada, an increase of almost 33% from last year’s total of 2,731.

Meanwhile, the recently renamed Canadian Association of Energy Contractors has stuck with its original November 2020 forecast of 3,771 wells—an increase of 475 (up 12.6%) from 2020 levels. COEC did not issue its typical spring forecast update again this year.

And, the Petroleum Services Association of Canada issued its third forecast revision in July, predicting that 4,250 wells will be drilled this year, up substantially over its original projection of 2,600 wells, which was issued last October.

About the Authors
Robert Curran
Contributing Editor
Robert Curran is a Calgary-based freelance writer.
Related Articles FROM THE ARCHIVE