The Hydraulic Fracturing Test Site (HFTS) program provides the opportunity to address the “billion-dollar problem” or the optimal development of a “stacked pay” resource, which requires simultaneous drilling and completion of tens-of-thousands of wells across multiple geologic horizons, also known as “cube development.” Too many wells result in a waste of resources, such as water, steel casings, and other infrastructure. It adds to emissions issues and land footprint. Too few wells from the perspective of well spacing leaves valuable resources in the ground. Research results from this program are expected to have positive impact on economic, environmental and resource recovery factors.

Conceptual illustration of a plan view showing the new observation/core well relative to the re-completed well.

The HFTS program, being carried out in the Permian basin and Eagle Ford shale, was designed to conduct field-based hydraulic fracturing research for horizontal shale wells, with the objectives of reducing and minimizing potential environmental impacts, demonstrating safe and reliable operations, and improving the efficiency of hydraulic fracturing. Improved design and execution of fracture stages also will reduce the number of future infill wells drilled, improve well spacing and reduce water volume and energy input. A smaller environmental footprint associated with shale drilling will be the result of this work. The research is being conducted in two separate projects, with HFTS I being conducted in the Permian Midland basin (Wolfcamp formation) and in the Eagle Ford formation, both in Texas and HFTS II being conducted in the Permian Delaware basin, Fig. 1. 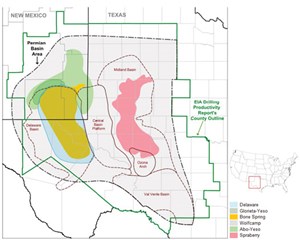 The HFTS II project builds upon the learnings from the HFTS I project while significantly leveraging downhole state of the art fiber optic (FO) diagnostic technologies. Both HFTS I and HFTS II projects were conducted by the Gas Technology Institute (GTI), with field facilities provided by Laredo Petroleum and Devon Energy for HFTS I and Occidental and Shell for HFTS II. Significant funding for both projects was provided by the National Energy Technology Laboratory (NETL), a research program within the U.S. Department of Energy, and many industry members.

HFTS I Permian-Midland (Wolfcamp) and Eagle Ford. Resource recovery from shale formations is currently estimated to be less than 10%. Despite the long history of hydraulic fracturing, the optimal number of fracturing stages during multi-stage fracture stimulation in horizontal wells is difficult to determine. The problem is the application of a uniform fracture stimulation design to all stages, with no consideration for geological variations along the wellbore. The result is an inefficient use and costly waste of energy and water, with significant energy reserves left behind. Research proposed in the HFTS program will establish the foundations for design of optimal fracture stimulation treatments. The program also will evaluate natural gas (field gas that may be flared) as an enhanced oil recovery (EOR) fluid and recompletions of existing wells.

In typical conventional fracture stimulation, a selected fracture design is implemented at all fracture stages of a horizontal well without consideration for reservoir heterogeneity or dynamic stress changes that occur during fracturing, this is termed as geometric fracture design by the industry. As a result, many times, 50% of the total production from the well will come from about one-third of the fracture stages pumped. The intended fracturing optimization through the HFTS program aims to eliminate this inefficiency by creating effective fractures in every treatment. The net effect of such efficiency improvement will increase production from the well, with no increase in the amount of water, chemicals, proppants or energy required.

In addition to improving production efficiency and minimization of water and energy use, another aspect of the overall program is treatment of the produced water. This is beneficial in two ways. First, water in the Permian basin is a commodity, and if the produced water can be cleaned and used for other purposes, the environment and region will benefit as a whole. Second, less water will need to be injected down disposal wells, which has been linked to induced seismicity. To realize these benefits, a membrane distillation technology, using waste heat, is being evaluated at the field test site in the Midland basin.

Recent advances in understanding of the hydraulic fracturing geometry captured at the HFTS, coupled with advances in expandable liner technologies, have provided an opportunity to significantly increase domestic production and recoveries from existing horizontal wells by strategically contacting previously un-drained portions of the reservoir through in-fill stimulation. Furthermore, recompleting 20% of the candidate pool of the existing wells (28,000 wells) would generate substantial economic activity, while at the same time minimizing the environmental footprint, as compared to new well development. Phase 3 of the HFTS I project, Legacy Well Recompletion – Infill Stimulation, will examine the potential for recompleting existing horizontal wells in a deliberate, scientific manner, which can be replicated across other shale basins with the following specific objectives:

Accomplishments (most recent listed first). The HFTS I project is being executed in three phases. The first phase focused on directly capturing the hydraulic fractures as they exist in the subsurface by coring through them, not relying on indirect measurement for validation. These ground-truth measurements are the basis for Phase 2 and Phase 3 field tests, which both focus on improving resource recovery from existing horizontal wells.

Phase 1. Laredo Petroleum provided the field site for the HFTS I project in the Permian Midland basin. The site includes 11 extended-reach horizontal wells (10,000-ft lateral lengths) drilled through the Upper and Middle Wolfcamp formations. In addition to the new research wells, Laredo provided access to multiple existing vertical wells, which were used as observation wells during research operations. Significant events and field activities completed include:

A full list of the accomplishments can be found in a previous article in the July 2019 issue of World Oil. To access the article, visit https://www.worldoil.com/magazine/2019/july-2019/special-focus/doe-s-permian-basin-field-laboratories-work-to-optimize-output-responsibly. In addition, project data from Phase 1 is now public and can be found at https://edx.netl.doe.gov/group/hfts-1-phase-1-group.

HFTS I Phase 2. A new set of horizontal wells was selected by the project members to evaluate the efficacy of cyclic gas injection (huff-and-puff EOR or H&P) using field gas, to improve production from existing wells. The selected wells are approximately one mile to the northwest of Phase 1 experimental wells. The EOR wells have an updated completion design to reflect learnings from Phase 1. The site includes a central injector/producer to test the H&P, offset by horizontal and vertical wells used to monitor gas movement during injection of field gas and production operations. Significant events and field activities completed to date include:

HFTS I Phase 3. Learnings from Phase 1 and 2 in the Permian-Midland will be transferred across shale plays and applied in the Eagle Ford to evaluate complementary EOR techniques in existing horizontal wells. A legacy well, infill stimulation program in the Eagle Ford shale in South Texas, will focus on identifying drained portions of the reservoir in existing wells and re-completing the wells to access the undrained sections of the reservoir.

This will be done by installing a liner inside the entire completed (perforated) interval of an existing well and mechanically expanding it, or cementing it, to create a seal between the liner and the perforated casing thus effectively closing off all existing perforations from the wellbore. New perforations will then be shot in locations between the existing sealed off perforations, allowing for creation of new fractures to reach previously unstimulated rock. In order to assess the optimal combination of parameters for new fracture creation, Phase 3 will drill a new observation well adjacent to the test well being re-completed and monitor fracture growth and geometry of the new fractures. The observation well will assess the fracture geometry created by the initial completion and identify the fracture voids.

Current status. All planned work for Phase 1, and most of Phase 2 work, has been completed. We continue to collect pressure, temperature and production data from the test wells for use in future analysis. Water treatment using membrane distillation field testing is ongoing. It is anticipated that all Phase 2 field testing and activities will be completed in third-quarter 2021. Phase 3 has commenced, and major field operations are planned to begin in October 2021. 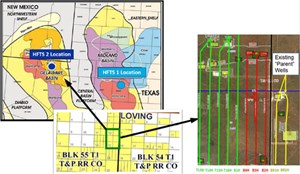 The HFTS II project comprises a series of coupled analytic and field experiments, where research quality data are acquired in dedicated research wells through full instrumentation at, and in proximity of, hydraulically fractured wells. Furthermore, the unique site design provides a great opportunity to understand the effect of reservoir depletion, as many child-well stages overlapped parent well areas. The extensive data set acquired was integrated and used to calibrate subsurface models and characterize hydraulic fracture (HF) geometry and proppant distribution. Diagnostics and modeling efforts enabled comprehensive calculations of HF vertical and lateral extent and production depletion profiles, as well as quantification of the HF growth bias for child well stages that overlapped parent wells.

Conventional micro-seismic was compared with fiber optic micro-seismic. The unique site design offered an opportunity to understand the effect of depletion on new well development as a few child-well stages overlapped parent wells. The extensive data set acquired was integrated and used to calibrate subsurface models and characterize HF network. Diagnostics and modeling enabled: (a) thorough HF vertical/lateral extent and production depletion profile calculations, and (b) quantification of the HF growth bias for child wells stages that overlapped
parent wells.

Current status. All test wells are on production. Collection of bottomhole pressure and temperature data from all wells is ongoing, including in the vertical observation and slant core wells. In addition to these activities, an integrated fracture simulation study was commenced, in which one or more simulation models will be built and history-matched, using the unique HFTS II data set. Multiple simulation runs will be performed to access design sensitivities, in order to help optimize frac design parameters, such as cluster spacing and well spacing. This six-month effort is scheduled to be completed in fourth-quarter 2021.

In support of technology transfer, the HFTS II members have agreed to publish 16 papers with HFTS II results and learnings, and present the papers at the 2021 Unconventional Resources Technology Conference (URTeC) in July 2021, in a HFTS II Special Session.

About the Authors
Jared Ciferno
NETL
Jared Ciferno is technology manager for the National Energy Technology Laboratory (NETL) of the U.S. DOE, with oversight for onshore oil and gas, hydrates and midstream research. Prior to joining NETL, Mr. Ciferno served as a research engineer for Calgon Carbon Corporation in Pittsburgh, Pa. He received his BS and MS degrees in chemical engineering from the University of Pittsburgh.
Gary Covatch
NETL
Gary Covatch is a project manager in NETL’s Natural Gas & Oil Division. He manages projects relevant to the exploration and development of oil and gas, enhanced oil recovery, marginal wells and the quantification and mitigation of methane emissions from pipelines and compressor stations. Mr. Covatch has a BS degree in petroleum and natural gas engineering from Pennsylvania State University and is a project management professional.
Jordan Ciezobka
Gas Technology Institute
Jordan Ciezobka is a senior research and development manager at the Gas Technology Institute (GTI) in the subsurface technology group. He has 15 years of experience in the oil and gas industry, much of it spent working on data-rich integrated diagnostic projects. He is the principal investigator and project manager for the DOE/NETL Hydraulic Fracturing Test Site I & II (HFTS) programs. These are collaborative field-based hydraulic fracturing integrated diagnostic pilots, which focus on environmentally prudent development of unconventional resources. He holds several patents in hydraulic fracturing technology and has authored and co-authored multiple papers on the topic. Before joining GTI in 2010, he held various technical positions at Halliburton. Mr. Ciezobka holds a BS degree in mechanical engineering from Purdue University.
Related Articles FROM THE ARCHIVE