In one well, the San Andres pay zone had been hydraulically fractured using a plug-and-perf technique during initial completion in April 2017. The locations of the perforations were selected, based on open-hole log results. The well had three perforation clusters per frac stage, and each cluster was 2 ft long with 2 shots per foot (spf). The frac operation yielded 96,000 lb of sand pumped into each stage (32,000 lb/cluster). With three clusters per stage being treated, there was a concern that some perf clusters could have been taking more or less sand than the others.

This well was monitored for abnormal production. A sustained drop in production would indicate a mechanical blockage, but operations must rule out pump problems or any other operational changes. The San Andres reservoir commonly has bacteria and scale, which is difficult to treat in horizontal wells. Experience with other wells in the area (same reservoir) show the need to clean out after approximately 18 to 30 months after initial completion. 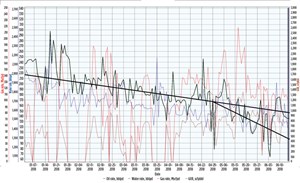 Fig. 1. One year after the initial completion, the well experienced a steep decline in production.

After a year, the well’s production decline was trending below the type curve, Fig. 1. This is generally a definitive indicator of damage from scale, paraffin, asphalt and/or iron sulfide scaling, which impedes flow and consequently requires treatment to address production impediment. The accelerated rate of decline of several wells in the basin was affecting the expected rate-of-return on fracture-treated wells.

In an attempt to solve the problem, Comitt Well Solutions ran an evaluation with their Excite pin-point restimulation system on a well that was suffering a steep decline in production. After an initial mechanical clean-out with a bit and venturi tool, a clean-out of the perforations and formation was started with treated water and 15% HCL solution. The treatments were used across 46 producing clusters in a one-mile-long lateral, cased with 5½-in. 20#, with a MD of 10,187 ft, and a TVD of 4,722 ft.

The technique was evaluated, based on the well’s post-treatment production and compared against its pre-treatment output. The pin-point system uses a pressure-activated straddle packer device to isolate each perforation cluster individually. The technique ensures 100% zonal isolation and precise acid placement control, one cluster at a time.

The wellbore was mechanically cleared, using a bit and venturi tool, before sending the pin-point system into the well. The tool was run-in-hole on a tubing string and activated by pumping fluid down the tubing into each zone at high pressure, to allow the acid to penetrate the formation. While other methods, such as bullheading and spotting treatments drop acid into the wellbore, the spotting treatment spreads the fluid across the lateral, rather than pumping fluid into the formation.

Fig. 2. The pressure signature at the surface indicates activation of the tool (1), and the acid break (2).

A distinct pressure signature at the surface provides feedback about tool activation and the effectiveness of the treatment, Fig. 2. An increased rate of flow causes the packers to inflate and seal off the zone. The pressure continues to keep the packers inflated and pushes the fluid into the formation. Each step is monitored, and when the appropriate amount of fluid is injected, the pressure is released, causing the packers to retract, enabling the tool to efficiently move to the next zone. The system transitions quickly from one zone to the next, ensuring treatment of every cluster, and that the treatment fluid is injected equitably across the formation. The hydraulically activated system provides placement of treatment fluids and can be designed for any pumping rate up to 30 bbl/min. (bpm), at a differential pressure up to 10,000 psi. This allows for high-rate, high-volume treatments at each perforation cluster.

The goal was to determine whether the treatment would be effective for at least six-months after the procedure was performed. The return-on-investment was calculated on the increased production versus the expected production and the cost of the treatment, to provide a calculated internal rate-of-return (IRR) and net present value (NPV).

The treatments were deployed in July 2018. For each zone, fluid was pumped down the tubing string to activate the system. The pin-point treatments used approximately 1,000 gal of 15% HCL per cluster, per treatment. The bottom assembly was run-in-hole on 2 7/8-in. tubing. The 46 zones were treated in just 15 hr of total treatment time (excluding trip time).

The treatment successfully placed a total of 47,000 gal of 15% acid (2,000 gal for the first zone and 1,000 gal for the rest) into the target intervals. The pressure was monitored at the surface, and the pressure signature was observed each time that the tool was set. Once each zone’s treatment was completed, pumps were shut down, the system was unset, and then moved to the next zone. A total of 46 zones was stimulated, with time between zones as fast as 3 min. The treatment was essentially performed in a single trip. The tool was temporarily delayed at the beginning of the job creating a concern about tool integrity. A small amount of downhole debris caused issues, but it was resolved, employing the system’s backup circulation feature.

After the initial four stages were treated, the tool was pulled out for inspection. Field engineers determined there was no damage to the tool, which is an indication that the system was durable enough to complete all 46 stages. The new tool was run-in-hole and treated 42 stages without major issues. With the pulling and re-entering of the new tool, two clusters were treated twice, which provided additional feedback on the treatments—both clusters treated at a lower average pressure for the second treatment, indicating that the initial treatment had been effective. At completion of the job, the system was in good condition with little evidence of wear in the sealing element.

The actual production data of the wells treated with the restimulation system are displayed in Fig. 3. The green line represents oil production. After the treatment, the accelerated decline below the type curve was arrested, and the well produced at a constant level for the next six months. The steady production for six months yielded superior results and enhanced ultimate recovery (EUR). Using the length-customizable straddle packer enabled precise placement of target zones, maximizing treatment results, including an IRR of 160% and an NPV(10)* of 500,000. 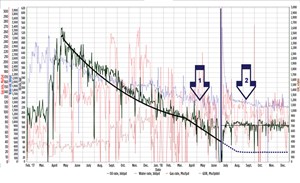 Fig. 3. Before treatment, the well was on a steep downward trajectory (1). The treatment rejuvenated production and created a consistent phase shift over six months (2).

The positive surface indication of setting and un-setting of the pin-point system provided a clear understanding and confidence of the downhole operations. Most of the clusters followed a friction pressure gradient, which indicates that the perforations were successfully treated on the initial completion, Fig. 4. Some variance in average treating pressure from cluster-to-cluster was observed, indicating heterogeneity in the formation and the fluid distribution during initial completion. 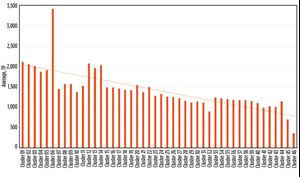 Fig. 4. Average treating pressure for each cluster shows falling pressure from toe to heel, due to a reduction in pipe friction. Some variance in cluster-by-cluster pressure was also experienced.

The restimulation technology is best suited for use in wells that demonstrate inequivalent frac penetrations within the zone during the initial completion. The pressure reading at the surface, coupled with the pressure charts from the initial fracturing, provide critical data about each cluster. Performing an engineering analysis of each perforation cluster during the treatment allows the operator to determine if it is warranted to refracture that cluster by pumping high-pressure proppant into the formation. The system is able to stimulate and refrac on the same trip, so each cluster can be evaluated efficiently. Going forward, poorly producing wells that had troubles on initial completion can be tested with this tool in an attempt to open more of the wellbore to the reservoir and increase production.