In a pandemic-bedeviled year in which the entire business universe has been turned on end, it’s altogether fitting that long-troubled gas producers find themselves in what a leading Haynesville shale player describes as the “most bullish” market in more than a decade.

In a pandemic-bedeviled year in which the entire business universe has been turned on end, it’s altogether fitting that long-troubled gas producers find themselves in what a leading Haynesville shale player describes as the “most bullish” market in more than a decade. 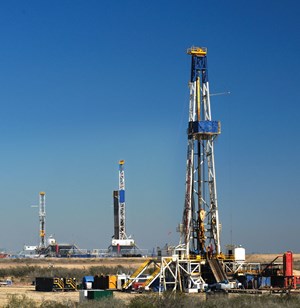 Thirty-seven rigs have operated consistently in the Haynesville-Bossier for much of October and November. Image: Comstock Resources, Inc.

“I think the brighter days are ahead of us. Our rearview mirror is pretty small, the windshield is really big, and gas prices look really good,” M. Jay Allison, CEO of Comstock Resources, Inc, said in a Nov. 7 call, adding, “the outlook for natural gas is extremely bullish. Really the most bullish it has been in over 10 years.”

Allison echoes a sentiment spreading throughout the North Louisiana and East Texas home of the high-flowing Haynesville and overlying Bossier shales. There, a coterie of largely privately held operators believes the stars have finally aligned for today’s improving gas prices to sustain beyond the typical seasonal spikes. The U.S. Energy Information Administration (EIA) agrees, forecasting that average 2021 spot prices on the Louisiana Henry Hub benchmark will average $3.14/MMBtu, up from the $2.14/MMBtu average this year.

Though price forecasts dropped a bit late in the fourth quarter, a steady 37 rigs remained active for most of October and November, before jumping by three rigs in early December, according to Baker Hughes. However, with operators playing catch-up from curtailments and deferred completions earlier in the year, estimated December production of 11,442 MMcfd is down from the average 11,962 MMcfd produced in December 2019, according to the EIA, Fig. 1.

The outsized effect of the relentless Covid-19 pandemic on oil demand has contributed to the brightened prospects for operators in the Haynesville-Bossier, where production is within easy reach of the massive Gulf Coast petrochemical complex and still-expanding liquefied natural gas (LNG) export network, Fig. 2. While Covid kept significant volumes of associated gas out of the supply mix, in keeping with the near-apocalyptic environment that defined 2020, numerous LNG shipments were delayed because of a historic hurricane season, but have since recovered. 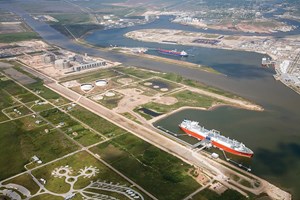 What’s more, completed well costs have dropped appreciably in what was once considered one of the costliest shale plays, abetted in no small part by a surplus of hydraulic fracturing capacity, magnified with Liberty Oilfield Services’ recent debut.

It was business, as usual, for much of 2020, with Henry Hub spot prices swinging wildly, dropping to a yearly low of $1.33/MMBtu, before rebounding sharply to $3.14/MMBtu during the week of Oct. 26-30, according to EIA data. Given the higher futures prices projected for 2021, operators that earlier focused entirely on oil assets are now taking a second look at their dry gas holdings.

BP, for one, had shelved the 193,000 net Haynesville acres included in the acquisition of BHP Billiton’s U.S. shale holdings, in favor of developing the Eagle Ford and Permian basin components of the 2018 deal. That is likely to change in 2021.

“You’ll see some activity in the Permian, but you’ve also heard us talk about the very strong activity in the Haynesville, and with gas over $3 next year, I think you’ll see that being a real focus of the activity,” CEO Bernard Looney told analysts on Oct. 27.

Comstock, for one, kick-started activity in the third quarter, adding two rigs and keeping three active frac spreads. “The low production levels brought on by the actions of disciplined natural gas producers, combined with a decline in associated gas resulting from low oil prices, have caused the 2021 future natural gas prices to improve substantially,” Allison said.

The Frisco, Texas, company reduced drilling activity and deferred completions over the first half of 2020, before deciding to “go back to work.” Comstock will close out the year with a six-rig fleet, and as things now stand, the ramp-up is likely to accelerate well into next year, with plans to add a seventh rig in the second quarter.

Comstock’s completed well costs are averaging less than $1,000/lateral ft, but will likely increase as better prices justify longer laterals and greater completion intensity. Beginning in September, the company reverted from proppant loadings of 2,800 lb/ft to its previous 3,500-to-3,600 lb/ft stimulation strategy. “While it made sense to bring well costs down as low as we did, with weak gas prices this year, with prices closer to $3-plus now, it makes sense to invest in a little more profit, as we believe the wells will have a higher return,” Allison said.

Following a late third-quarter ramp-up in completions on its comparably modest 24,000-net-acre leasehold, Goodrich expects production to exceed 150,000 Mcfed, entering the fourth quarter, compared to 125,000 Mcfed in the third quarter.

Indigo Natural Resources LLC is among the most active of the privately held operators, averaging four to six rigs and one to two frac spreads. For the year, the company plans to turn 52 wells in line, followed by 10 new producers in the first quarter of 2021, says Sr. VP of Finance and Investor Relations Emily Newport. Indigo will operate five to six rigs and no less than one dedicated frac crew next year on the 435,000 net acres under control.

Fellow private operator Vine Oil & Gas LP. is operating three rigs and one companion frac spread, but is still formulating the 2021 program, which will be presented to stakeholders in February, says Investor Relations Director David Erdman.

Vine controls 188,000 net acres in northwestern Louisiana, where along with the Haynesville, the once-bypassed mid-Bossier zone has emerged as a primary target. Some 500 ft shallower and with associated lower temperatures, Vine’s mid-Bossier wells are trending drainages as high as 2.5 Bcf/1,000 ft, and at completed well costs of $2.75 million for 7,500-ft laterals, they deliver from 50% to 60% return rates.

Meanwhile, for self-described contrarian Kimbell Royalty Partners LP, it’s “I told you so” time, as a once-derided $445-million investment harvests the dividends of a projected 50% increase in gas prices over the next year. With the 2018 acquisition of Haymaker Minerals & Royalties, LLC, the mineral and royalty company now holds non-operating interests in roughly 786,400 gross (7,700 net) Haynesville acres.

“We were aggressive on gas and everybody hated it, “ CEO Robert Ravnaas said. “We are very excited to see the forecasted improvement in natural gas prices, both in the fourth quarter of 2020 and full-year 2021, based on the futures curve.”

Ravnaas said others are taking notice of the improving market. “We have seen a pickup in competition on the gas side that didn’t exist, even six to 12 months ago, but that doesn’t concern us or impede our ability to successfully execute our M&A strategy,” he said. “We like to be contrarian. So, we’re not going to overpay for gas assets in this environment. We’re going to look at them, but we’re not going to overpay.”

From both geological and commercial perspectives, Rockcliff Energy believes the best of the Haynesville lies in East Texas, where the company holds a 280,000-net-acre position.

Consistency has been the hallmark of the Houston-based operator, since it entered the play in late 2017. Before adding two more rigs and two additional frac spreads in October (Fig. 3), Rockcliff had maintained a consistent four-rig program since February 2018. “Right now, we’re running six rigs, but we’ll likely go back to four rigs early next year,” Simon said. 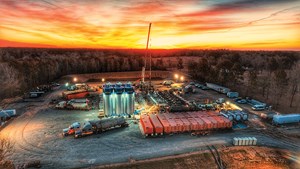 While the 2021 program was still being finalized on Nov.17, he said it is unlikely to differ markedly from the 50 wells that will have been drilled and turned-in-line this year. Rockcliff’s largely legacy leasehold is concentrated in well-defined Panola and Harrison counties, where 2020 gross production exceeds 1 Bcfd, or around 750 MMcfd net.

The distinct differentiators of the Texas Haynesville begin with the rock, itself, which at around 200-300 ft is more than twice as thick as that normally found in Louisiana, with comparably higher volumes of free gas-in-place and at comparatively shallower depths. “The shale is thicker in East Texas, which allows us to wine rack, so we can drill laterally in both the upper Haynesville and the lower Haynesville,” Simon said.

A joint venture with Houston’s Trace Midstream augments a well-developed regional infrastructure in close proximity to the Gulf Coast. “We have very low gathering, treating and compression costs. That’s somewhat different than some of the more legacy Louisiana producers, who had to invest in long-term transportation agreements and provide minimal volume commitments (MVC),” he said.

Meanwhile, noting that gas prices “are in a somewhat better place today than oil prices,” Liberty decided the time was right to enter the Haynesville. “We’ve been looking at Haynesville for a while. We like the outlook there,” CEO Chris Wright said on Oct. 28, shortly after the fracing company set up shop in Louisiana. “We are excited to plant our flag in the Haynesville.”

Wright says the Louisiana Haynesville brings distinctive challenges and confirmed operators’ assessments that recoveries are “highly dependent” upon frac intensity. “The Haynesville is deep and highly over-pressured, which contributes to the huge size of the resource. But, it means it’s a high-pressure basin, which means pumping above 10,000 psi. The reservoir is thick, so the pounds per foot or frac intensity is high in the Haynesville, “ he said.

Liberty, which is expected to close by the end of this year on the acquisition of Schlumberger’s OneStim U.S. and Canada hydraulic fracturing portfolio, has not disclosed how many frac spreads or cumulative pumping horsepower it brings to the Haynesville. The timing, however, coincides with surplus regional fracing capacity and correspondingly low service costs.

“The biggest cost component of any drilling program is your completion program on your fracs, and we’ve got excess capacity in the basin, which is creating record-low bids,” says Goodrich’s Turnham.

Jim Redden is a Houston-based consultant and a journalism graduate of Marshall University, has more than 38 years of experience as a writer, editor and corporate communicator, primarily on the upstream oil and gas industry.