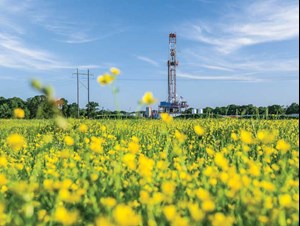 Boasting that you have ample running room has taken on an entirely new meaning across South Texas nowadays.

With drilling sites in single digits and tons of pressure pumping horsepower put out to pasture, maintaining social distancing is little problem across the estimated 20,000-mi2 aerial reach of the Eagle Ford and overlying Austin Chalk unconventional play. As a result, operators this month are forecast to produce some 263,000 bopd less than they did in February, when the full brunt of bloated stockpiles and the demand-devouring coronavirus began to take hold, hurling prices into the nether regions. The benchmark West Texas Intermediate (WTI) price crawled up to around $40/bbl by mid-July, but operators appear in no hurry to put more crude on the market, even with completed well costs, in some cases, coming in below $5 million/well.

The Eagle Ford is expected to produce 1.106 MMbopd in August, down from the 1.369 MMbopd put to sales in February (Fig. 1), according to the U.S. Energy Information Administration (EIA). February-to-August gas production is estimated to drop 771 MMcfd, to 67,107 MMcfd from 67,878 MMcfd.

Not surprisingly, drilling activity went south precipitously, sinking from 70 active rigs on Feb. 7 to a low of nine rigs during the week of July 10 (Fig. 2), according to Baker Hughes. The rig count inched up to 12 rigs by July 31.

Fig. 1. July-to-August oil and gas production from the Eagle Ford region is expected to decline by 23,000 bpd and 85 MMcfd, respectively. Source: US Energy Information Administration (EIA)

For many, the price rout was the final blow, with a flurry of bankruptcy petitions rattling the shale community, perhaps none more impactful than that of Chesapeake Energy Corp. The company filed for Chapter11 bankruptcy protection on June 28, some 16 months removed from the $4-billion acquisition of WildHorse Resource Development Corp. and roughly 470,000 net acres in the northern part of the Eagle Ford and Austin Chalk trend—an oil-rich asset that Chesapeake designated as Brazos Valley.

Meanwhile, while undetermined shut-in volumes account for some of the production decline, others have opted to defer completions of previously drilled wells. In the latest data available, the EIA put 1,295 Eagle Ford wells in the drilled-but-uncompleted (DUC) inventory as of June—a number that has likely risen since. “It’s so cheap to drill. Completion is a different story, but it’s cheap to drill,” Magnolia Oil & Gas Corp. President and CEO Steve Chazen said on May 12. He was justifying the decision to retain a rig to drill three Austin Chalk wells on a pad in the venerable Giddings field, which will likely go into the DUC file until 2021.

As for shut-in production, with most companies in the pre-earnings quiet period, near-term plans were not disclosed. ConocoPhillips hinted it may begin restoring some of the estimated 165,000 bpd of cumulative shut-in oil production in its three U.S. shale plays early in the third quarter. The Eagle Ford, which is lumped alongside the company’s Permian basin and Bakken assets, produced an average of 233,000 boed in the first quarter, representing 58.4% of aggregate production from the so-called Lower 48 Big Three. 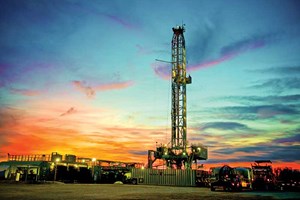 Drilling permits authorized by the Texas Railroad Commission (RRC) suggest operators are not inclined to construct wells anytime soon. From Jan. 1 to Aug. 7, the RRC issued 1,278 permits for new horizontal wells in the six RRC districts encompassing the Eagle Ford, compared to 2,246 permits issued for the same period last year. The RRC approved 114 new well permits between July and Aug. 7.

Given today’s unprecedented climate, operators also are unwilling to venture outside the low-risk core, with nearly 48% of 2020 drilling permits issued in the four counties comprising the well-defined oil window of the so-called Karnes Trough, Fig. 3.

One of those is EOG Resources Inc., which as of mid-July, had not revised its 2020 plan to run three rigs and a like number of completion spreads within a 516,000-net-acre leasehold, centered in the Karnes area. EOG turned 82 wells in line during the first quarter, with 200 new producers on tap for the full year.

“While we remain flexible and responsive to the pace of the price recovery, we have a large inventory of newly completed wells waiting to be put online. We plan to bring those to sales as prices begin to recover during the second half of 2020 and exit the year with momentum heading into 2021,” CEO Bill Thomas said on May 9.

Marathon Oil Co is slowing down, but not fully putting the brakes on the “capital efficient” 160,00 net acres under control, mostly in Karnes and Atascosa counties. After suspending all completions in the second quarter, Marathon plans to operate two rigs and one frac crew over the second half of 2020, down from an average of four rigs and two frac crews in the first quarter, which saw 38 operated wells turned-in-line, with quarterly production averaging 114,00 boed. 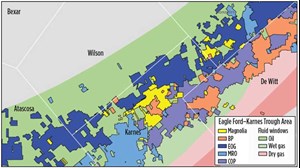 Fig. 3. Of the new drilling permits issued between Jan. 1-July 8, 344 were for wells in the well-defined oil window of the Karnes Trough. Source: Magnolia Oil & Gas Corp

In April, Marathon slashed its 2020 capital program by $1.1 billion, with the Eagle Ford and Bakken, together, receiving around 95% of resource play capital allocation over the second half of 2020. The first three months represented an historical capital-efficient quarter for the Eagle Ford, with 30-day production rates/lateral ft up 20% while well costs/lateral ft declined by 10%.

Two-year-old Magnolia responded early to the price collapse and ceased completing wells in February, though the firm still managed to increase production in the first quarter to 68,400 boed, up from the 66,800-boed average last year. In April, Magnolia laid down the one active rig in its 23,500-net-acre Karnes County position, but kept the one rig working in the 430,000 net acres under lease in the re-emerging Austin Chalk development of the Giddings field.

“We expect to see a sharp decline for the remainder of the year,” Chazen said. “We currently plan to drill a few additional wells in Giddings, although we don’t expect to complete any wells until the fourth quarter or until we have some better clarity around product prices.”

After delivering 42,000 boed in the first quarter and putting 14 wells online in its Karnes and Catarina assets, at completed costs of less than $4.9 million/well, Murphy Oil Corp is taking a breather for the remainder of 2020 and preparing for next year. Murphy holds around 125,000 net acres, targeting the upper and lower benches of the Eagle Ford and the Austin Chalk.

Meanwhile, Chesapeake’s petition for bankruptcy protection dealt a severe blow to what Wood Mackenzie described as the “great disruptor” of the U.S. shale sector. “It’s difficult to point to another company that made more of a widespread impact on the U.S. shale sector than Chesapeake,” Principal Analyst Alex Beeker said in a note on the day of the Chapter 11 filing.

The fallout will be felt across the Eagle Ford, where Chesapeake controls roughly 709,000 net acres and emerged as one of the play’s most active operators. As of Feb. 26, the company had planned to operate up to seven rigs and around four frac spreads this year and bring as many as 185 wells to production. Chesapeake did not responded to requests for an update.

Beeker said Wood Mackenzie modeling pegs the Brazos Valley asset with a half -cycle break-even cost close to $50/bbl, while wells in the company’s southern Eagle Ford acreage break even at $40/bbl.

Two days after Chesapeake filed, Sanchez Energy Corp. emerged from Chapter 11, rebranded as Mesquite Energy Inc. The now-private company filed for bankruptcy protection on Aug.11, 2019 and completed the restructuring process on June 30. Interim CEO Cameron George could not be reached for comment on current activity or production targets.

Once ranked among the play’s most active operators, the former Sanchez Energy, at last count, held some 271,000 net acres, where it targeted the Lower, Middle and Upper Eagle Ford Shale with, “upside potential” in the Austin Chalk and Pearsall shales.

The restructuring process has not gone nearly as smoothly for early mover EP Energy Corp. The company filed for Chapter 11 protection on Oct. 3, 2019, and emerged from bankruptcy on March 6, only to be sucker-punched when the price rout spooked its financial backers, including former Eagle Ford joint venture partner Apollo Global Management Inc, the Wall Street Journal reported on March 16. The subsequent cancellation of the reorganization plan forced EP to start anew.

The timing has been particularly unfortunate for operators that have recently completed acquisitions or mergers.

In November, Repsol agreed to buy Equinor’s 63% stake for $325 million and officially took over control in April.

Less than five months after the Dec. 20 all-stock acquisition of Carrizo Oil & Gas Inc. and its 76,500-net-acre Eagle Ford leasehold, Callon Petroleum Co., likewise, went on hiatus, but says it may resume completions this quarter. Callon, which was running a high of nine rigs earlier this year on its Eagle Ford and Permian assets, as of mid-May was operating a single rig.

BP p.l.c. also has put a hold on the 300,000-net-acre Eagle Ford and Austin Chalk asset acquired in the October, 2018 BHP Billiton deal. The company’s US onshore entity, BPX Energy, operates the leasehold under a 50/50 joint venture with Devon Energy Corp, which, like its partner, released all Eagle Ford rigs and completion crews in mid-April.

Devon expected to defer some 10,000 bopd across its US portfolio in the second quarter, 80% of which came from restricted flow-back of higher-rate wells and bringing fewer wells online. “We are going to continue to complete wells, but at a much slower pace for the remainder of the second quarter and third quarter. We plan to start ramping back up with completions in the fourth quarter and then maintain more of a steady pace through 2021 if something around the strip prices were to play out,” Hager said.