Every barrel of Texas crude oil produced yields over 6.5 bbl of water with it. As oil production has risen, managing massive volumes of produced water is ever more challenging. A new Texas Alliance of Energy Producers white paper tackles the issue, to ensure that future energy development is not constrained by water issues.

….nor any drop to drink.”  Oft misquoted as “water, water everywhere and not a drop to drink,” the line completes a stanza from the long classic penned by English poet Samuel Taylor Coleridge, “The Rime of the Ancient Mariner.”

Water, water, every where,

And all the boards did shrink;

Water, water, every where,

Nor any drop to drink.

As frequently as the phrase is misquoted, its true meaning is misunderstood, and is certainly misused, often deliberately. I may well be guilty of the very same here; I am mostly guilty, however, of being yet another in a long line to pluck the phrase to open an article about water, in this case, oilfield water issues in Texas. In terms of the imagery that the phrase conjures up, however, there’s a certain symmetric relevance—a man surrounded by water, but it is saltwater and not a drop of it is fit to drink or do much else with.

This is increasingly the case in Texas, when it comes to the relationship between petroleum production and water, and indeed the two are inextricably linked. Crude oil and water are produced at the same time. The volume of U.S. domestic crude oil production has exploded over the last 10 years, with Texas leading the charge. The resulting volume of produced water is progressively problematic, so much so that the present path is unsustainable. Currently, as much as 90% is injected back into the ground via saltwater disposal (SWD) injection wells, and the balance is treated for reuse in upstream oil and gas operations.

One such solution is to increase the recycling and reuse of produced water, as outlined in the recently released white paper titled, “Sustainable Produced Water Policy, Regulatory Framework, and Management in the Texas Oil and Gas Industry: 2019 and Beyond,” published by the Texas Alliance of Energy producers and released in September. The paper was authored by John Tintera, Blythe Lyons and Kylie Wright.  It was co-sponsored by the Independent Petroleum Association of America, with additional support from the American Petroleum Institute (API).  The project was underwritten principally by XTO Energy, with additional financial support from BP. 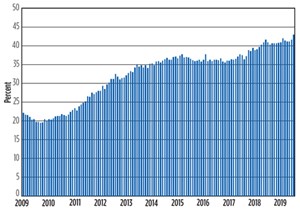 Crude oil production in the U.S. began to grow during 2009, adding some 7 MMbpd since then (a 140% increase, 4 MMbpd of which have come from Texas. While U.S. production has well more than doubled, Texas output has quadrupled, and its share of the U.S. total has grown from about 20% in 2009 to some 42% at present, Fig. 1. These extraordinary successes have brought the U.S. much closer to energy independence. The U.S. Energy Information Administration (EIA) estimates that U.S. net imports of crude oil averaged about 2.34 MMbpd in 2018, equal to roughly 11% of U.S. petroleum consumption. That is down from a whopping 60% in 2005, and in fact is the lowest annual percentage since 1957. The Dallas Federal Reserve Bank notes that the share of the upstream oil and gas sector in the level of U.S. nonresidential fixed investment doubled from 3.4 % in the decade before the shale oil boom to an average 6.4% percent since 2008.

As last month’s preview pointed out, an estimated 1.27 Bbbl of crude oil were produced in Texas during 2017. At the same time, B3 Insight estimates that the statewide volume of produced water in Texas was more than 8.5 Bbbl in 2017, for a WOR (water-to-oil ratio) of 6.7. Crude oil production swelled to over 1.6 Bbbl in 2018, and at that same ratio, the volume of produced water in the state would be about 10.8 Bbbl. Though the rate of crude oil production growth is slowing in Texas, those numbers will still be yet higher in 2019. Texas is on track to produce about 1.85 Bbbl of crude oil this year, which implies produced water volume of nearly 12.4 Bbbl statewide.

Not surprisingly, the Texas Permian basin comprises the largest share of produced water in the state, accounting for over 65% of the total volume in 2017, according to B3 Insight. Table 1 contains data compiled by B3 Insight from the Texas Railroad Commission’s H-10 Annual Disposal/Injection Well Monitoring Report.

The 8.5 Bbbl that are injected into the subsurface account for as much as 90% of all produced water from onshore operations in 2017. Broadly speaking, the injections occur in two types of injection wells: injection for enhanced oil recovery (EOR)—waterflooding and the like—and injection for disposal. Statewide in 2017, an estimated 4.0 Bbbl were injected for EOR operations (47% of the statewide injection total), while 4.5 Bbbl were injected for disposal.  In the Permian, that trend is reversed, which is to say a higher share is used for EOR. In 2017, about 58% of the injection total (3.3 Bbbl) is for EOR purposes, and 42% (2.3 Bbbl) is for non-EOR injection disposal.

A review of disposal applications received versus permits issued from Texas Railroad Commission (RRC) data (supplied by Miller Consulting of Austin, Texas) demonstrated the volume of applications, as well as the processing time for injection permits.

Reports indicate that permitting issues (increasing lengths of time it takes to issue a permit and decreased volumes of water approved versus sought for injection) are becoming common, as the numbers of applications soar. Tables 2 and 3 compare the permit applications received and issued in Texas for 2017 and 2018.

If an application is protested, the permit process will be delayed until a hearing is held. The RRC thoroughly addresses the potential seismic effects of a proposed injection well through a “seismic review” of the geology, as well as extenuating seismic risk factors in the area around a well. If a permit is recommended for a seismic review, the process could take six months or more, as data is requested and reviewed by the regulator before a decision is reached. The RRC stated that there are multiple common issues that impede application reviews, including incomplete forms, incomplete data submissions and ignoring notice periods; however, major clarifications were most often needed for well performance and location justifications.

For example, the increase in Permian injection volumes—from 2014 to 2017—in Table 1 do not nearly correspond with the rate of crude oil production growth. The total volume of produced water subsurface injection expanded 12.1% from 2014 to 2017 according to these data; however, crude oil production in the Texas Permian basin (RRC districts 7C, 8, and 8A) was a whopping 55% higher in 2017, compared to the 2014 annual total. While upstream reuse would not nearly account for all of that discrepancy, it does point to the possibility that greater volumes of produced water are being treated and reused within the oil field in Texas.

These discrepancies reveal another problem identified by the report, and that is the lack of solid data on the total disposition of produced water in Texas. First, the RRC injection reporting/monitoring data may not capture all injection/disposal, but more problematically, the current regulatory and permit framework does not encourage the compilation of recycling volumes. The estimate that no more than 10% of the total produced water volume in Texas is reused in upstream operations for fracturing, etc., is largely based on anecdotal information and observations.

Further, it is quite likely that even since 2017, the shift toward recycling and reuse within the oil field is occurring at a faster pace with the development of midstream water operations and infrastructure. John Durand, President of XRI Holdings, and the Chairman of the Alliance Water Committee, estimates that the volume of produced water used in new upstream developments may be approaching 15% in 2019.

THE TREND TOWARD RECYCLING AND REUSE

Presently, the only realistic dispositions for growing produced water volumes in Texas are disposal, either for EOR operations or non-EOR disposal, or reuse within the oil field for upstream production. Though still relatively small, recycling produced water for oilfield reuse is clearly on the rise and is rapidly replacing the freshwater usage for those purposes. A number of developments are shifting the trends toward greater amounts of recycling/reuse for upstream operations going forward. First, the cost of freshwater is going up, as is the cost of transporting freshwater, while the cost of treatment and reuse of produced water is coming down. Disposal capacity is shrinking, and some injection formations are becoming over-pressured. RRC permits are increasingly reflecting smaller permitted volumes at lower pressures.

The white paper study looks forward to the day when much higher volumes of produced water are treated and reused for upstream operations; treated to discharge quality and released onto the surface or into an existing waterway; or treated to a quality sufficient for beneficial re-use outside the oil field. Those possibilities span the spectrum from agricultural use to even, perhaps, treating to a drinking water-quality standard.

First and foremost, the Texas Alliance of Energy Producers’ focus on water issues is to ensure that the growing volumes of produced water in Texas do not impede the continued development of oil and gas resources in the state. This means that management solutions for billions of barrels of produced water must be allowed to develop, including the establishment of flourishing midstream water markets, in which produced water is increasingly viewed as an asset with value, rather than as an oilfield waste to simply be managed and done away with. This only can occur with forward-thinking, progressive regulatory and legislative frameworks, both at the state and federal levels.

Texas’ well-developed regulatory and legal framework demonstrates its leadership on oil, gas and water issues, and this trend continued in the most recent legislative session. House Bill (HB) 2771 directed the state of Texas to seek NPDES authority from the EPA. HB 3246 clarified the ownership of produced water for recycling purposes, a critical component for the advancement of recycle/reuse, both inside and outside the oil field. Disappointingly, incentive mechanisms to encourage greater volumes of produced water treatment, recycling and reuse did not pass, but they will likely be addressed again in the next session, in 2021.

Simply put, oilfield produced water management is rapidly becoming more sophisticated in Texas, with the development of midstream water markets and infrastructure, including pipelines to move massive volumes of produced water from point to point. One can even envision an upstream, midstream and downstream water market, as is the case for petroleum products in Texas.  The goal of the Alliance is to ensure that government policies, both state and federal, do not restrict the continued development of produced water solutions.

At the same time, as these options for recycling and reuse continue to develop, Texas operators must continue to have sufficient access to disposal as, again, as much as 90% of produced water is presently managed through that tool. Even under the best of future circumstances, injection disposal will always be a significant part of the produced water management portfolio.

It has long been the practice of lawmakers and regulators in Texas, and the U.S., to protect and preserve our water supplies. As policies and practices for managing oilfield produced water mature, the perception that produced water is a problem—at best a nuisance and at worst a threat—is giving way to the growing recognition that produced water can be a solution.  Will we be able to embrace the technology, overcome public perception, and craft the regulatory framework that allows us to take advantage of the solutions massive volumes of produced water may provide? The answer lies before us.

Karr Ingham KARR INGHAM is an Amarillo, Texas-based economist, and owner and President of InghamEcon, LLC, an economic analysis and research firm. Since 2003, he has served as Consulting Petroleum Economist for the Texas Alliance of Energy Producers (TAEP) and was recently named the association’s Executive V.P. Mr. Ingham created TAEP’s Texas Petro Index, a tool for tracking Texas E&P activity. He holds a BBA degree in economics from West Texas A&M University and is a member of several industry/economic associations. /authors/texas-alliance-of-energy-producers/karr-ingham/