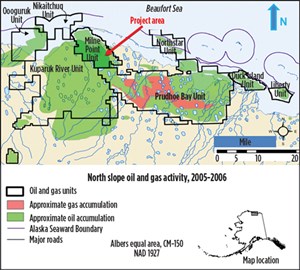 Figure 1 provides the overall depiction of the project area, Milne Point Unit (MPU), which is nestled between the Prudhoe Bay Unit (PBU) and Kuparuk River Unit (KRU), respectively. The MPU is about 30 miles to the northwest of PBU and about 15 miles northeast of KRU, encompassing 50,000 acres that contain 250 wells on 12 pads. Development began in 1985, with cumulative production, to date, totaling 353 MMbbl of oil, including 267 MMbbl of light oil and 86 MMbbl of heavy oil. Current production stands at 30,000 bopd.

The goal of the project is to acquire scientific knowledge and field data by assessing an advanced polymer flooding technology in the Schrader Bluff heavy oil reservoir on the ANS. To that end, the overall objective of this project is to perform a research field experiment, to validate the use of polymer floods for heavy oil EOR on the ANS.

The main scientific/technical objectives of the proposed project are to assess polymer injectivity into the Schrader Bluff formation for various polymers at various concentrations, as well as the water salinity effect on the performance of polymer flooding and gel treatments. The project team also will work to assess incremental oil recovery vs. polymer injected, as well as the effect of polymer production on surface facilities and wastewater remediation methods.

The project was initiated in June 2018, with the bulk of the project tasks currently ongoing.

The field pilot test will be carried out in Milne Point field (MPF), which includes 35,744 acres on the ANS. The MPF consists of four oil pools: the Ugnu, Schrader Bluff, Kuparuk River and Sag River reservoirs. The field pilot test will focus on the Schrader Bluff formation, which extends between 3,400 ft and 5,200 ft, TVD, subsea. This formation is divided into two stratigraphic intervals, the O sands and N sands. O sands are subdivided into OB and OA, while N sands have subintervals NF, NE, ND, NC, NB, NA.

The structure of the pool is a homocline with 1-2° dip from east to northeast. Schrader Bluff O sands were deposited 70 million years ago from marine shoreface and shelf deposits, and consist of fine-grained, quartz-rich sandstone interbedded with siltstone and mudstone. The overlying N sands were deposited within wave-dominated shoreface and deltaic systems. Upward coarsening is evident, with mudstone and siltstone dominating the lower portion of this interval. There is no evidence of free gas accumulation within the Schrader Bluff formation, but complex fault blocks have compartmentalized this pool.

Preliminary laboratory and simulation studies indicated that polymer flooding has great potential to enhance oil recovery from the Schrader Bluff heavy oil reservoirs, yet prior to this project, no field test has been performed in Alaska. In fact, no large-scale polymer flood of a heavy oil and other unconventional resources has occurred, to date, in the entire U.S., although it has been tested and implemented in other countries, such as Canada and China. Initial scoping studies suggest that successful implementation of polymer flooding could increase heavy oil recovery by 50% on the ANS and increase America’s oil reserves by tens of billions of barrels. 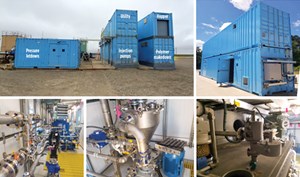 The project utilizes a unique set of polymer mixing and pumping facilities, named the Polymer Slicing Unit (PSU), that were custom-designed and manufactured in Canada. As shown in Fig. 2, the PSU consists of five modules: the pressure letdown module, the injection pump module, the polymer make-down module, the hopper, and the utility module. Results from prior laboratory and simulation studies were used in the initial selection of the polymer (HPAM).

The polymer, in powder form, is transported and stored in super sacks, each containing 750 kg (1,650 lb) of polymer. The super sacks are loaded onto the hopper with a forklift, and the polymer is fed into the make-down unit below, where it is mixed with water to make a mother solution. After 100 min. of hydration time in the tank, the mother solution is slipstreamed into the main water supply that feeds into the three triplex positive-displacement injection pumps in the pumping unit, one for each injector, plus a spare.

Ultimately, with the knowledge, experience and data obtained from the laboratory experiments, modeling, and pilot test, production optimization will be carried out using the final reservoir models for the project area. Using model results, the commercial feasibility of polymer flooding beyond the pilot area will be assessed. The planned integration of the advantages of polymer injection, low-salinity water, horizontal wells, and conformance improvement will significantly enhance oil recovery for heavy oil reservoirs. The project also will aid the industry’s general understanding of polymer flooding by resolving the optimum polymer viscosity and salinity to inject during heavy oil recovery. Once successful, the developed technology will provide a cost-effective and environmentally friendly technology for heavy oil development on ANS.

The primary focus of the research program, since the start of the polymer injection in August 2018, has been monitoring the performance of the pilot in the injection wells, J-23A and J-24A, and production wells, J-27 and J-28. To complement the polymer injection, the foci of other supporting tasks have been advancing reservoir simulation, tackling flow assurance challenges, and laboratory core floods. The accomplishments to date are summarized below: 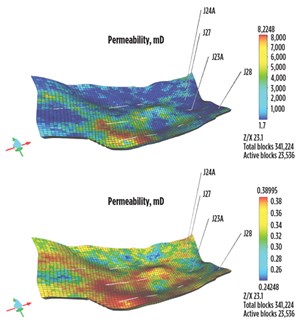 In the near term, efforts will focus on studying the emulsification behavior of emulsions in the presence of polymer at the current water cut, as well as the evaluation of performance of emulsion breakers. The separation behavior of emulsions will be investigated in the graduated cylinder to avoid transfers. Longer-term research will focus on continuing to monitor for breakthrough of the polymer injectate at the production wells and evaluating reservoir properties to ensure optimal flood design and performance over the remaining duration of the project.

“This material is based upon work supported by the Department of Energy, Office of Fossil Energy, administered by the National Energy Technology Laboratory, under Award Number
DE-FE0031606.”