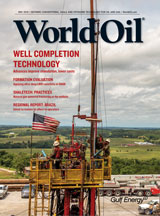 Going with the flow

Can a major war be won?

Trent Latshaw
The recent tightening of oil export sanctions by the Trump administration against Iran has caused me to do some thinking.

Rob Vagnetti Jared Ciferno
The Marcellus shale Energy and Environmental Laboratory (MSEEL) is a field project conducted by the National Energy Technology Laboratory (NETL), an agency of the U.S Department of Energy. It conducts extended studies to analyze and characterize key attributes of the Marcellus in the eastern U.S., to increase production and ultimate recovery. MSEEL is one of numerous field lab projects conducted by NETL.

Mike Slaton
Brandishing an array of government initiatives and the allure of world-class geology, Brazil is intent on reversing recent years of decline in overall production.

Understanding the structure of complex flows to optimize production

Anna Pieper Dr. Bruno Pinguet
Digitization and automation require a very good understanding of multi-phase flows, if such new modeling concepts are to improve hydrocarbon production, and there is much more to do.

William (Bill) Head
What information should you trust?

Anthony Spinler
Why would you drill without MPD?