The Gas Technology Institute (GTI) of Des Plaines, Ill., in cooperation with the National Energy Technology Laboratory (NETL), a part of the U.S. Department of Energy, is leading a high-profile research collaboration focused on two Hydraulic Fracturing Test Sites (HFTS) in the Permian basin of West Texas and New Mexico. It brings together government and industry to improve recovery and continue enhancing environmentally responsible methods of optimizing production in the Midland (HFTS1-Midland) and Delaware (HFTS2-Delaware) basins.

Fracturing—the process of creating pathways through rock formations to enhance the flow of oil or gas into a wellbore—has come a long way since early innovators used nitroglycerin in attempts to stimulate shallow wells during the late 1800s. During the 21st century, advances in the hydraulic fracturing of shale plays ushered in a new oil and gas boom. Even so, there is much more to discover and innovate, if producers are to maximize efficiencies, and reduce operational and environmental risks associated with E&P in unconventional reservoirs.

The NETL–GTI research collaboration, which began with HFTS1-Midland in October 2014, has made progress in improving the design and execution of fracturing processes that will reduce the number of infill wells to be drilled, water used, and the energy input required during future oil and gas recovery activity. NETL has invested $12 million in the overall $32-million HFTS1-Midland project, as well as provided management assistance for the project. This effort involves a Joint Industry Partnership (JIP), comprised of 15 operators and companies in the oil and gas industry, to accelerate acceptance of the technologies and best practices being developed.

In August 2015, Laredo Petroleum provided a field site for the NETL-GTI project in Reagan County, Texas (Fig. 1), that included 11 horizontal wells in various stages of initial drilling. Prior to, and after hydraulic fracturing operations, researchers with GTI conducted seismic surveys, which produced images of the subsurface geology; collected water and air samples; and undertook microseismic monitoring to detect very small-scale earthquakes that occurred as a result of industrial processes. The provided field site also was used to study the distribution of proppant (the material used to keep hydraulic fractures open), by using special tracers. 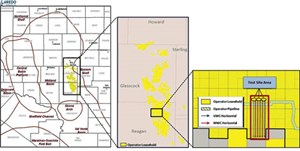 Despite the long history of hydraulic fracturing as a means of resource recovery, the optimal number of fracturing stages during multi-stage fracture stimulation in horizontal wells is not known. In addition to the increased expense of multi-stage fracturing in horizontal wells, increasing the number of stages does not always correlate with an increase in production. The problem is the application of a uniform fracture stimulation design to all stages, with no consideration for geological variations along the wellbore. The result is an inefficient use, and costly waste, of energy and water.

Optimization of the fracturing process requires an understanding of the cause-and-effect relationship between fracturing parameters and local geological properties at a given location along the wellbore. Realizing that the generalized rock mechanics theories and hypotheses are not truly applicable to fractured and laminated shales, quantifiable impacts of a shale’s geomechanical and depositional features are a prerequisite for design and implementation of optimized hydraulic fractures. The overarching goal of the HFTS1-Midland project is to understand and define the relationships of shale geology and fracture dynamics, using detailed field data that include coring of the fracture domain. Analyses of the data will aid in updating fracture design models and improve the effectiveness of individual hydraulic fracture stages.

Resource recovery from shale formations is estimated to be less than 10%. Research carried out in the scope of this project is establishing the foundations for investigating enhanced recovery techniques for increased resource recovery in existing fracture-treated wells. Natural gas as an enhanced oil recovery (EOR) fluid is in the early stages of broad use in the industry. Many aspects of the EOR process need to be researched and addressed prior to widespread acceptance. An additional phase of the HFTS1-Midland project will investigate several of those aspects, and will also help to accelerate acceptance of the technology through the JIP.

In September 2015, 400+ fracture stages were completed in 11 Laredo wells in the Wolfcamp formation of the Midland portion of the Permian basin. A first-of-a-kind through-fracture core sample was produced to document the physical properties of the fractures, Fig. 2. 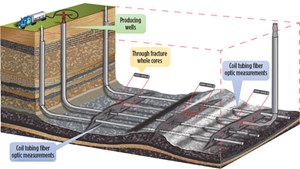 Along with comprehensive data, including microseismic data collected during the fracturing process, this core sample provided insight on how induced underground fractures spread. This insight is being used to assess the performance of individual fracture stages.

The 11 horizontal wells (10,000-ft horizontal legs) at the Laredo site are drilled through the Upper and Middle Wolfcamp formation. The Laredo site location also has vertical wells nearby, which are being used as observation wells. Significant events and field activities completed at the site include: 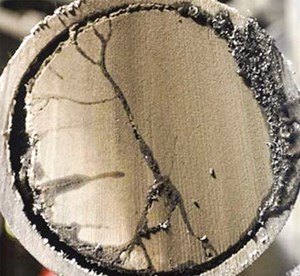 Fig. 3. Slant well core in a core barrel from successful drilling at 81˚.

FINDINGS AND NEXT STEPS FOR HFTS1-MIDLAND

All planned work for HFTS1-Midland has been completed. Pressure, temperature and production data from the test wells continue to be collected for future analyses. The information collected through the project is the most meaningful data set, to date, for unconventional oil and gas production, providing information essential to understanding fractures, validating and developing models, and assessing how predictive analytics can improve the process.

The air quality data and analysis results indicate little-to-no increase in toxic air quality compounds during fracturing and production operations at the test site. This study also showed there was no evidence of natural gas or produced water migration to the groundwater aquifer.

In the spring of 2018, Phase II of HFTS1-Midland began. The Phase II research effort is an EOR field pilot coupled with specific lab testing. The goal of the planned EOR activities is to determine the effectiveness of cycling gas injection (huff-and-puff in three complete cycles comprised of an of injection cycle, a soaking cycle, and a production cycle) for increasing oil recovery from the Wolfcamp shale.

Specific activities for Phase II of HFTS1-Midland include:

HFTS2-Delaware. In March 2018, GTI was awarded funding from NETL for cost-shared R&D on hydraulic fracturing efficiency. To date, NETL has invested approximately $8 million in the $27-million project. Anadarko Petroleum Corporation (Anadarko) and Shell Exploration and Production Company (Shell) agreed to co-host a new field test site in the Delaware basin, where multiple experiments to evaluate well completion, optimize design, and quantify environmental impact will be carried out. This project also involves a JIP comprised of 15 operators and companies in the oil and gas industry.

Because the new HFTS2–Delaware field test site in Block 55 T1, Loving County, Texas, will feature different depth, pressures and permeability than the HFTS1–Midland site, each location requires specific techniques for optimal production, based on local geologic complexity. To date, all wells on the eight-well pad have been drilled, and two have been fitted with fiber optic sensors. An additional vertical pilot well has been drilled and cored, and instrumented with permanent fiber optic cable and pressure gauges. Fracturing operations also are in progress.

“We’re excited to provide the location that will further this important HFTS project,” said Chad McAllaster, Anadarko vice president, Delaware basin development. “Our industry is continually looking at ways to optimize its operations in a way that maximizes recoveries, while improving environmental performance.”

“We are pleased to be joining with Anadarko as co-hosts in support of the HFTS[2] project,” said Amir Gerges, Shell’s General Manager for the Permian basin. “This research project will help further advance efficiency in the development of oil and natural gas resources, and will contribute to sustaining the U.S. as the world’s leading oil and gas producer.”

The results and data collected during the HFTS projects will be used by industry, for many years, for exploration and development of different shale formations. As noted above, in conventional fracture stimulation, a selected fracture design is implemented at all fracture stages of a horizontal well without consideration for reservoir heterogeneity or dynamic stress changes that occur during fracturing. As a result, 50% of the total production from the well will come from about one-third of the fracture stages pumped.

The intended fracturing optimization through the HFTS program aims to eliminate this inefficiency by creating effective fractures at every stage. The net effect of such efficiency improvement will increase production from the well, with no increase in the amount of water, chemicals, proppants, and energy required. This translates to minimized air emissions and other environmental impacts associated with production of a unit volume of oil and gas, such as those associated with gas flaring.

The shale revolution has enabled the production of significant volumes of oil in some parts of the U.S., but inadequate infrastructure has resulted in an inability to transport the gas produced with the oil out of the field. In such cases, significant volumes of otherwise valuable gas are flared, resulting in greenhouse gas emissions and lost revenue. The HFTS1-Midland project is investigating the potential for using flared or otherwise wasted gas to improve recovery efficiency of oil from shale by reinjecting the gas into the reservoir for EOR purposes. Not only will this reduce the amount of natural gas being flared, but it will also increase the recovery efficiency of the resource, as well as reduce the number of wells that will be needed to recover it.

Another aspect of the HFTS projects with a potentially large and favorable impact is the treatment of produced water. Because water in the Permian basin is a valuable commodity, the environment and region, as a whole, will benefit if the produced water can be cleaned and used for other purposes. This also would mean that less water would need to be injected down disposal wells—a practice which has been linked to induced seismicity.

The Permian basin in West Texas is considered one of the largest hydrocarbon resources in the world, covering 86,000 mi2 and encompassing 52 counties in New Mexico and Texas. An increase in shale production from the Permian, alone, could set the U.S. on a very plausible path toward energy security. According to IHS Markit, the Permian is likely to produce about 5.4 MMbopd in 2023, up from 4.1 MMbopd today. Natural gas production in the basin is likely to triple by 2020 from its 2010 level.

KeyLogic Systems, Inc.’s contributions to this work were funded by the National Energy Technology Laboratory under the Mission Execution and Strategic Analysis contract (DE-FE0025912) for support services.