Lest anyone jump to the wrong conclusion, what follows is not a referendum on the state of the industry, but rather the efforts of one drilling contractor and the astronomical community to further the cause of science—a joint initiative that likewise reinforced that some, uh, glaring issues do not require high-tech, and equally costly, solutions.

More to the point, Permian basin rig lights and flare stacks have long been blamed for making the West Texas nights a bit too bright for the astronomers at the world-renowned McDonald Observatory in the Davis Mountains, nearly 180 mi due south of Midland. In response, to make sure his rigs no longer contributed to what he decried as “light pollution,” Pioneer Energy Services (PES) President, CEO and Director Stacy Locke teamed up with folks at the more-than-80-year-old astronomical research facility to do something about it. What resulted was a rather straightforward solution that not only makes sure night tower crews have more than enough light to work safely, but it also allows sufficient darkness for the mega-powerful telescopes to peek into the deepest spatial horizons. 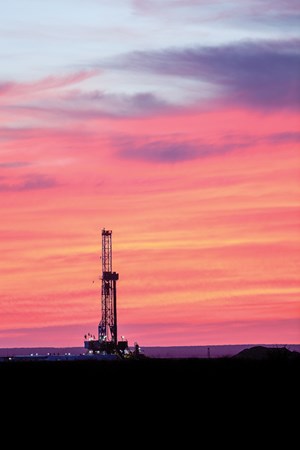 One of the 568 rigs that were making hole in the Permian Basin last November, which collectively inhibited the astronomical examinations of the McDonald Observatory. Photo courtesy of BHP Billiton.

“We’re getting light pollution out of all of this oil and gas activity,” Locke told the American Association of Drilling Engineers (AADE) April 9 at its annual technical conference in San Antonio. “It’s just potentially going to be an enormous problem for the McDonald Observatory, and we can’t let that happen as an industry. It’s one of those gems that we need to protect.”

After a series of tests, Locke and Bill Wren, a special assistant to the superintendent of the University of Texas-operated McDonald Observatory, settled on advanced, light-emitting-diode (LED) lighting technology. After the new lights were installed on PES rigs and fitted with glare-softening shields, they were simply re-aimed to cut down the heavenly glow.

As an added bonus, a mission that ostensibly was initiated solely to darken the skies so as not to interfere with astronomical research, ended up providing tangible benefits to PES, which Locke and Wren detailed in the joint paper, “Upgraded rig lighting improves night time visibility while reducing stray light and the threat to dark skies in West Texas,” presented in March at the SPE E&P Health, Safety, Security and Environmental Conference-Americas in Denver, Colo. In the paper, the co-authors explained how LED lights not only reduce energy consumption and costs, but shielding and re-directing the lights promotes safety by muting what once was a blinding glare directly into the eyes of floor hands.

Of course, the West Texas skies would be a bit darker these days, with or without the new lighting, as stacked rigs do not require rig-floor illumination.

Not so fast. Speaking of stacked rigs, the warning bells over widespread layoffs are growing louder, with companies being urged to consider what may lie ahead before cutting too deeply into their payrolls. Certainly, the industry is nowhere near the crucible that was 1986, when the U.S. rig count cratered nearly seven-fold from its 1981 peak. Yet, that dismal decade, which progressively saw a wholesale shredding of the cumulative workforce, provides a cautionary tale, in that the subsequent recovery found many companies struggling to replenish their employment rolls—a loss of talent that years later contributed mightily to what only recently was dubbed “the great crew change.”

On Feb. 11, Bloomberg reported that global layoffs had reached well beyond 100,000, and that was well before first-quarter earnings began trickling in, prompting new rounds of cuts. At that time, DNB Markets and the UK’s largest labor union, Unite, said that the North Sea service hubs of Aberdeen and Stavanger had seen more than 11,500 folks lose their jobs. Menon Business Economics AS, meanwhile, went on to predict that as many as 30,000 more employees could be laid off in the North Sea strongholds.

Ironically, some of the loudest warnings of late are coming from those most directly affected by low commodity prices: operators of the shale plays. During last month’s high-level IHS CERAWeek global energy conference in Houston, the chiefs of both Bakken pioneer Continental Resources and Permian stalwart Pioneer Natural Resources (no relation to PES) cautioned in an April 22 Houston Chronicle article that slashing jobs may not be the ideal strategy going forward.

“I may not be drilling wells, but we’re not laying anybody off,” said Continental founder and CEO Harold Hamm. Pioneer CEO Scott Sheffield added, “You’ve got to keep the people.” Incidentally, for those in the market, he also noted that Pioneer was still on the lookout for engineers and geologists.

Jim Redden
Contributing Editor
Jim Redden is a Houston-based consultant and a journalism graduate of Marshall University, has more than 38 years of experience as a writer, editor and corporate communicator, primarily on the upstream oil and gas industry.
Related Articles FROM THE ARCHIVE