NICOSIA -- Day 2 of Gulf Publishing Company's Eastern Mediterranean Gas Conference (EMGC 2018) in Cyprus kicked off with a keynote presentation by Dr. Symeon Kassianides, chairman of The Natural Gas Public Co. (DEFA) of Cyprus. Dr. Kassianides spoke about the proposal to establish a floating storage and regasification unit (FSRU) to import gas to Cyprus for use in power generation.

The target for first gas is 2020. In light of this tight deadline, which is motivated by Cyprus' need to meet EU greenhouse gas (GHG) emissions limits, DEFA is working with Cyprus' energy ministry and EU organizations to move quickly on the project. 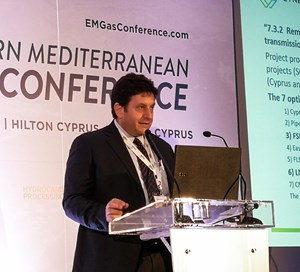 CyprusGas2EU Project scope. The FSRU project—known as CyprusGas2EU—stems from the European Commission's €7.5-million CEF Syngery (CYnergy) Project, which is concerned with the establishment of an integrated storage, transmission and distribution system for natural gas in Cyprus in the forms of LNG and CNG. CYnergy, which has been 60% funded, aligns with the CyprusGas2EU Project's supply target date of 2020.

CyprusGas2EU would help remove internal bottlenecks in Cyprus to end the Republic's energy isolation and allow for the transmission of gas from the Eastern Mediterranean. Dr. Kassianides said that under the project proposal, gas imported to Cyprus through an FSRU would be used for power generation at three independent power companies—Dhekelia, Vasilikos and Moni—as well as subsequent use for industrial and transport fueling. Gas would be delivered first to Vasilikos, where a license has already been granted for marine works.

The project will also encourage market synergies between Cyprus and other EU member states, such as Greece and Italy, and establish a fully integrated internal energy market that will help reduce GHG emissions and comply with the EU's 2020 target.

Project progress to achieve first gas by 2020. The infrastructure scope would include the acquisition of an FSRU; the construction of a jetty, berthing and mooring equipment, and a jetty-borne pipeline; and the installation of an onshore gas pipeline and above-ground facilities, including an onshore pressure reducing and metering station. A feasibility study for the pipeline was completed in 2012, outlining a route to minimize environmental, social and other impacts.

The next steps for the CyprusGas2EU Project, explained Dr. Kassianides, include two tenders—one for the supply of gas by 2020, to be announced by second-quarter 2018; and one for the FSRU, marine works, and infrastructure works. An open season process will be initiated this year to determine demand by all users and to establish committed gas volumes. Preparatory work for land acquisition is also in progress.

Dr. Kassianides also named a number of other, related projects under consideration, including LNG bunkering, gas delivery to industrial and urban sectors under the CYnergy scope, gas use for road transport, and LNG and gas delivery to remote locations.