In 2017, executives at YPF tasked engineers with sourcing the most advanced snubbing equipment on the global market to assist with the development of their Vaca Muerta resources. In 2022, the company has successfully completed 45 wells in Argentina, using the new HCU technology.

In 2017, one of the executives at Argentina’s NOC, YPF, was scouting for innovative completion alternatives in the U.S. With a systematic increase in lateral length extensions of Vaca Muerta’s well designs, the prevailing hypothesis was that, at some point, the existing coiled tubing unit (CTU) technology was going to encounter its technical limits. To organically transition into an extended reach, factory-mode, plug-drilling technology, he directed YPF’s subsidiary, AESA, to lead an assessment of potential options.

AESA’s evaluation process, to secure a new completion technology for the extended lateral transition, was centered around safety, operational performance, management capabilities and corporate culture. Some of the key drivers evaluated were equipment reach, speed, leanness, versatility, reliability, and maintenance simplicity. But with a long-term vision for the project, AESA was also rating training capabilities, performance history, and company core values. After performing the thorough due diligence exercise, a partnership was formed with U.S. based Deep Well Services (DWS). 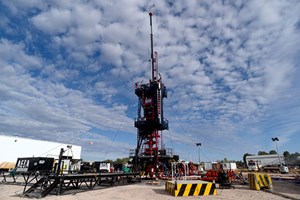 Vaca Muerta shale play. Located in the Argentine Neuquén basin, the Vaca Muerta formation is considered one of the largest recoverable shale oil and natural gas resources in the world. At a 3,000-m depth and expanding over 30,000 km2, the shale reservoir in Vaca Muerta is very high-quality, on par with several U.S. shale plays, such as the Eagle Ford, Marcellus and Bakken. The extensive Vaca Muerta oil discovery and development began in 2010, led by YPF. Even though the initial drilling campaigns were done with vertical wells, the operator in 2014 shifted to horizontal drilling and completing laterals.

The trend. It is widely known that to increase unconventional play productivity, well designs have become longer, Fig. 2. The underlying premise is that greater lateral length allows for additional frac stages that eventually lead to greater well production and consequent return on investment. This technical and economic equation was pioneered by the U.S. shale industry, but closely replicated by the Argentine unconventional one sector. 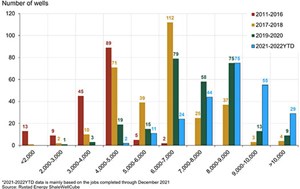 “One of the main drivers that we have in YPF, to reduce our project´s development cost, is the migration to longer laterals,” explained YPF Vice President Juan Manuel Ardito. “During 2022, we reached the longest laterals average since we started our operation in Vaca Muerta, including a 14,500-ft well, the longest one in the basin,” Fig. 3.

“Every day, we seek to overcome the drilling limits, but we also need the well completion to come along with the challenge. The snubbing unit incorporated by our wholly owned subsidiary, AESA, is a key aspect to achieve that,” he pointed out.

“At YPF, we are working to turn Argentina into a global energy provider, and our performance in Vaca Muerta gives us this unique opportunity,” he continued. The incorporation of new technologies, such as the snubbing unit, will lead us to strengthen local capacities and improve our outcomes in the only unconventional development outside North America.” 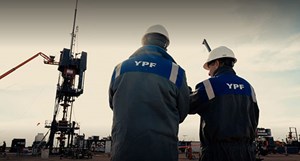 Fig. 3. YPF's supervisors on location during the first AESA HCU drill out.

Buckling is a phenomenon that occurs when the frictional wall contact force between the string and casing restricts the rate of penetration (ROP) in the lateral section. As wells go longer on the horizontal, the contact forces naturally increase and restrain the reach capabilities of the coiled tubing units. To mitigate this effect, companies have explored several methods, including lubricating fluids, stiffer string designs, and BHA vibrating tools, among others. All the prior allowed companies to considerably push technical limits and conquer new segments. However, there is a mechanical and economic boundary to the mentioned process, and Argentina’s operators were not strangers to it.

Transition to extended reach. To assist in the Argentina coiled tubing-to-HCU transition, YPF and AESA assembled a multidisciplinary technical team that designed and executed an international assessment process. This process would locate the indicated technology that would allow them to effectively stay ahead of the extended lateral completions and workover market.

The team traveled to the U.S. and met with operators, contractors and manufacturers. With no exact references on when the transition happened around the world, the apparent rule of thumb said, “when the horizontal equals the vertical.” Even though this seemed like a vague guideline, it properly correlated to what was being conducted experimentally in the Vaca Muerta, with CTUs having reach issues when getting close to the 3,000-m mark (in an approximate 3,000-m formation depth). After several field visits and a huge amount of data-gathering, the team went back to Argentina and presented a technical case.

HCU/snubbing history. Snubbing is defined as the process of tripping pipe on a well that has enough surface pressure to eject the tubulars, if no restrictive force is applied. Snubbing units have been present in the industry since the 1950s, and given their live well intervention capabilities, they have been commonly associated with well integrity issues, operational contingencies, and well control situations. This was long before the technology was upgraded into a factory-mode, well completion instrument that allowed longer shale milling operations, with advanced safety mechanisms during the past decade.

HCU’s are hydraulically powered rigs that can execute a wide range of interventions, including snubbing pipe, but they have unique efficiency and safety components engineered into the design that differentiates them from a traditional HWO/HWU snubbing unit  (SPE-201412MS, SPE-204202MS, SPE-205330MS). The use of jointed or stick pipe (over coiled tubing) has several advantages:

Local solution and value proposition. When the HCU technology was evaluated locally, some of the most significant challenges to be tackled were the following:

When assessing these challenges, combined with the well design outlook that YPF had established and the U.S. precedent, it was clear that HCUs were going to be required. This meant being able to push the current technical limits, but from studying the available data, also aiming to outperform the current CTU technology in certain segments and opening a window for other optimization angles that had never been explored, Fig. 4.

Implementation and present. The recipe for success was tricky. Landing a new technology designed to complete extended-reach live wells was naturally challenging. Doing it in a country that had almost no snubbing precedents meant that finding and training the right people was going to be the most critical safety and performance driver.

With this variable in mind, and after the international assessment process, AESA decided to partner up with Deep Well Services (DWS). Headquartered in Pennsylvania, DWS specializes in long-lateral, high-pressure, multi-well completions technology and, most importantly, training. With an IADC-credited competency program, a QMS program with API Q2/ISO-9001 certification, and a snubbing-experienced management team, it was the perfect fit to dive into the Vaca Muerta project.

The AESA-DWS training program was designed around different lines of work:

With these processes set as project fundamentals, operations started in 2021. One year later, 45 wells were completed with no recordable accidents and less than 1% non-productive time (NPT). Different, unprecedented operational and technical challenges were accomplished in Argentina with the HCU technology, preparing the ground to streamline completion opportunities.

Single-pick rig-over. The AESA S-01 HCU has the capacity to swing over from well to well on a single pickup with the use of a crane, significantly increasing multi-well pad efficiencies. This requires a conventional rig-up on the first well, but from that point on to the following wells, the crews only have to break off the primary BOP flange from the wellhead, and then lift the entire rig, swinging onto the next well while keeping all the support equipment with the original layout. Rig-up and rig-down savings of approximately 50% per well are experienced, using this technique and technology.

Flowing-well interventions. Running pipe on live wells has a huge advantage, when it comes to formation damage, given that no fluids are inserted into the reservoir. Therefore, formation conditions are kept intact.  But these natural benefits of the snubbing technology can be further increased, if operations are done while the well is flowing. AESA completed 11 of 45 wells, with the wellhead connected to the production line, hence omitting any production NPT and reducing the operator’s total cost of ownership. At the same time, a flowing well lowers the working pressure, also reducing the pipe-light exposure and allowing higher trip speeds.

Single-bit runs on extended-reach drill-outs. The use of jointed tubing gives the operator the ability to rotate the complete string, increase circulation annular velocities, and mitigate WOB stacking issues. Improvements in wellbore hole-cleaning, from the above-mentioned points, and rotary technology also have allowed HCUs to hit total depth (TD) in 95% of U.S. operations with laterals over 12,000 ft, using only one bit via one run, Fig. 5. 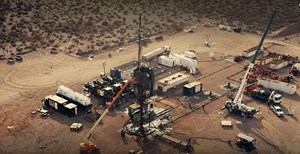 This significantly differs from CTUs, where two, three or even four runs are required in the extended-reach completion segment. The AESA S-01 drilled out eight wells (out of 45 total interventions), with laterals ranging between 2,839 m and 3,915 m, in one bit run. Two of those eight wells also presented casing deformation conditions, which did not generate any difficulties to the HCU technology.

Initial drill-out results and optimization opportunities. From the first to the eighth drill-out, a 40% decrease in time was achieved, Fig. 6. This was accomplished, working hand-in-hand with YPF and DWS on getting a cleaner hole, which is the most significant restriction on ROP. The relevant upgrades were the following: 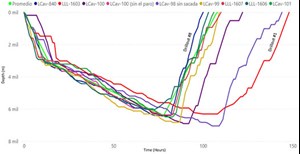 But after eight extended milling interventions and still going through a learning curve, there’s still room for operational improvement. The main areas to cover are:

With laterals getting longer and locals acquiring the required competencies, the expectation is to keep increasing the drill-out workload around AESA’s S-01 HCU and further units to come. In the short term, the completion of YPF’s PAD 293 is planned, where the longest well in Argentina’s history (LLL-1677, with 7,962 of TD and a 4,398-m horizontal section) has to be drilled out.

AESA and DWS are combining the companies’ experiences and resources to unlock the full potential of the HCU technology in Argentina and replicate the evolution model that generated outstanding results in the U.S.

JUAN MANUEL ARDITO is YPF’s non-conventional upstream V.P. He joined the company in 2014. Prior to his latest assignment, he was responsible for managing oil and gas business units in the upstream area. He also served as oil and gas manager and field production engineer. He was a key player in the development of Loma Campana, an unconventional play outside North America. Mr. Ardito holds a degree in petroleum engineering from de Universidad Nacional del Comahue and a master’s degree in oil and gas production from Buenos Aires Institute of Technology.

JOSE IGNACIO EL IDD is drilling and completion manager for AESA. He has 10 years of industry experience and has served in different engineering and managerial positions for drilling and workover companies. Mr. El Idd earned a  degree in chemical engineering from the Buenos Aires Institute of Technology and holds an MBA from IE Business School in Madrid.