End-of-life assets have become a debated topic, not least because many are now operating far beyond their originally expected lifespans. Efforts in the past decade to reduce both CAPEX and OPEX, and create efficiencies throughout upstream operations, have optimized output while controlling costs.

But those efforts have their inevitable limits, and in tightly regulated regions, such as the North Sea, certain costs are simply unavoidable. This includes the removal of end-of-life production wellheads—as well as non-productive exploration wellheads—unless special dispensation is granted to leave them in-situ.

Facing uncertain times once more, operators are naturally looking for ways to control those costs. Several older wells that had been abandoned temporarily, with the intention of being removed at a later date—when the capital would be available—have now reached that “later date,” when no more delay is possible. However, almost all of the operational fat has been trimmed already, and most E&P companies emerged from the price crash of 2014-2015 much leaner than they went into it. They also are operating with less capital reserves, and a drop in available external financing and investment.

Finding additional efficiencies in these circumstances is a tough task at the best of times. However, doing so during 2020-2021’s pandemic-induced fall in demand adds an extra layer of complication. Inevitably, every aspect of upstream operations is back under the spotlight, and unavoidable costs, such as wellhead removal, are ideal candidates for building new efficiencies into operations—particularly in harsh, remote or deep waters.

The costs of wellhead removal largely derive from the complexity of the conventional means of carrying it out. Take a traditional, abrasive, water-jet cutting system: it will require a team of six to eight people operating a high-pressure system in a high-risk environment. The equipment, itself, can weigh between 50 and 60 tons and take up to 1,500 to 2,000 ft2 of space. Such is the extent of the deck spread on the transporting vessel that it leaves little room onboard for the removed wellhead.

The two days needed at the quayside, just to bring onboard and interface all the equipment; the multiple voyages needed to remove multiple wellheads; the hours involved in planning and coordinating all the moving parts—not to mention the carbon emitted during each voyage. What’s more, the tools, themselves, can be energy-intensive: 1,000 horsepower to operate the equipment spread is common.

Then there are the circumstances, where abrasive water-jet cutting systems simply cannot be used at all. Where the wellhead concerned is installed at a depth greater than 400 yards, the surrounding water pressure renders the pressure cutter all but useless. In these cases, a mechanical cutting system is necessary. This cannot be deployed from a vessel; instead, a drilling rig, with all its associated costs, is needed. Typically, a rig-based deployment will take more than twice as long as a vessel-based deployment—and it can increase the cost by a factor of ten or more.

Operational challenge. As with many of the changes seen in the past decade, this is an area where innovative technology, and close relationships between suppliers and operators can deliver newer, simpler and more cost-effective solutions. Working closely with an operator in Norway, Baker Hughes began searching for ways to combine the deepwater capabilities of a mechanical cutting system with the cost advantages of vessel-deployed, abrasive, waterjet cutting methods. The overall goal was not just to match existing capabilities of both, but to create a new solution that improved on their results.

The Baker Hughes team turned to its existing three-knife, hydraulically operated multi-string cutter, which has been deployed extensively for rig-based casing cutting operations. To make it compatible with vessel-based deployment, experts developed an innovative subsea system, to be deployed in conjunction with a ROV, a connector and the industry-proven mechanical cutter, Fig. 1. The prototype, later launched as Terminator technology, was trialed at a testing facility in a Norwegian fjord before the operator deployed the new system on a remote abandoned exploration well in the North Sea. 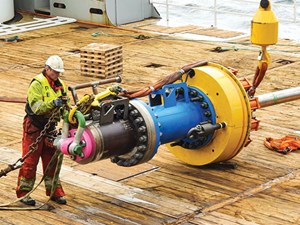 Fig. 1. A multi-string casing cutter, adapted for subsea deployment, being prepared for trial at a Norwegian test facility.

The advantages of the new approach were immediately clear. Like its rig-based counterpart, the cutter can cut through multiple strings of casing or large-diameter strings safely and quickly. It can be used for any application, where rotation and pressure can be applied, but requires only 100 hp to do so. Instead of relying on power supply from a rig, the system is driven by the ROV hydraulics, which immediately eliminate the need for any extra downlines, hoses or cables.

Once the system is deployed overboard, no additional equipment remains on the deck, so the small surface footprint is leaving room for multiple wellheads, if needed. The ROV then guides the cutting system into the well, where the connector latches on to the wellhead to be removed. The ROV will power the hydraulic motor that can rotate the cutter and adjust the pressure to the knives’ actuator to make the cut. As a result, the system only requires two people to operate it.

The new system can take as little as 35 min. to complete the wellhead cut. A pressure drop confirms when the full circumferential cut has been completed, to ensure that no uncut areas remain, and to make it easier to recover the pipe. The conductor and spud can are then removed in the same sequence, from the same vessel, if surface handling allows. The total operation can take less than three hours. In fact, the time-savings start even earlier: once the subsea engineer has secured any necessary permits to remove the wellhead, it can be just a matter of hours before all the equipment is loaded and on its way.

Systems such as this can be used in shallow waters, but the particular challenges of a deep-water environment mean this is the area in which new solutions can create the biggest positive impact. Removing wellheads at the end of their exploratory or production life is inevitable. It is an issue that touches on many of the industry’s key concerns—complexity, carbon emissions, compliance, and, of course, safety—at a time when new cost constraints are causing operators to re-calculate the financial merits of extending the working life of aging assets.

Over the past decade or so, the oil and gas sector has seen new and innovative technologies applied to operations. Some have been tweaks at the edges. Some have been totally transformative. But as this kind of solution shows, successful innovation is really about re-thinking the old ways of doing things, as well as finding consistent and concrete improvements to familiar and fundamentally necessary processes like this.