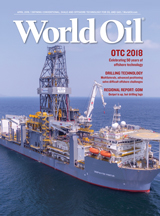 Offshore investments may still be slow to accelerate, but that hasn’t stopped companies from ramping up R&D efforts to create a safer, more efficient and more productive offshore industry.

As was the case last year, nearly all of this group of new technologies and next-generation improvements on existing products remains split between drilling and production applications.
Features

Planning and operating a duo-lateral well in Mittelplate oil field

Rennie, A.
Engineered drilling solutions combined with real-time visualization software, land a deepwater wellbore in the reservoir, drilling laterally 100% within the pay-zone and geostopping above the oil water contact, ensuring maximum production.

Chris Casad
An example of a cooperative relationship was demonstrated when Ulterra, a producer of PDC drill bits, and a large independent E&P company—operating in the Eagle Ford shale—combined forces to examine ways to improve performance.

Stephen Prensky
In 2017, the big news in the logging and formation evaluation industry was the completion in July of the successful merger of Baker Hughes and GE Oil & Gas to form BHGE, which comes on the heels of the unsuccessful effort by Halliburton to purchase Baker Hughes in 2016.

Jay Stieneker
On June 13, 2014, the cost of a barrel of West Texas Intermediate stood at $107.49. That year, budgeted, worldwide capital expenditures in the oil and gas industry would approach a record $520 billion. The future looked bright.

Philippe Herve
As the oil and gas (O&G) industry emerges from the recent downtown, executives are looking for innovative ways to promote growth.
Columns

Kurt Abraham
Is it “transparency” on the GOM, or is it something else.

Ron Bitto
Mixed messages from the Gulf of Mexico.

Craig Fleming
In March, downward pressure on oil prices was applied by consecutive gains in U.S. inventory, capped by a weekly surge of 5.32 MMbbl in late March.

Emily Querubin
Deep Sea Mooring (DSM) has announced that it is now carrying out operations for Maersk Drilling in Trinidad.

Chett Chiasson
President Donald Trump’s State of the Union address on Jan. 30 hit home with those of us who see Port Fourchon as an essential component of the nation’s long-term energy security.

Designing a future with “holistic resilience”

Jim Redden
With rigs on standby, awaiting active duty in the deepwater Gulf of Mexico (GOM), the management of southern Louisiana’s resilient Port Fourchon is locked firmly in the visionary mode.

Construction to begin on next leg of LA-1

Jim Redden
With construction set to commence on the next segment, fingers are crossed that President Donald Trump’s sweeping infrastructure initiative will provide some of the funding necessary to complete the 19-mi elevated Louisiana Highway 1 (LA-1) thoroughfare to Port Fourchon.