Tellurian LNG project in limbo after it axes $1 billion bond 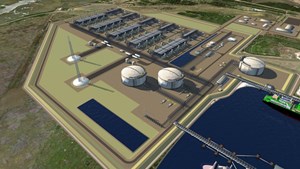 Citing uncertainty in the junk-bond market, the Houston-based company halted the offering of senior secured notes and warrants on Monday. Tellurian had previously sweetened the deal to include a sky-high 12.5% all-in yield, friendlier terms for investors and collateral that included shale-gas fields.

Tellurian has struggled to attract financing for its liquefied gas complex in Lake Charles, Louisiana, which it began constructing prior to obtaining funding. The bond deal and warrants were intended to kickstart further financing on the roughly $13 billion first phase of the project known as Driftwood LNG.

The latest US inflation data has fueled concerns that the Federal Reserve will continue hiking rates, leading to a broader risk-off move among investors. Rising yields and widening spreads have put pressure on other deals, including a $4 billion bond offering for the buyout of Citrix Systems Inc. which came with a bigger discount on Monday.

A representative for B. Riley Securities, the sole bookrunner on the deal, and Tellurian didn’t respond to requests for comment. The stock dropped the most since November 2020, when India’s Petronet LNG Ltd. walked away from plans to invest in Driftwood.

Tellurian Co-Founder and Chairman Charif Souki has been pitching the LNG project for about six years.

Souki, his management team and Tellurian directors drew criticism last week from investor Achur Iskounen, who said poor corporate governance and a lack of relevant experience made the project untenable. Iskounen urged the company to put itself up for sale.