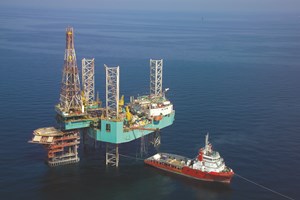 The contracts include $1.3 billion for Integrated Drilling Services (IDS), and $700 million for the provision of four island drilling units.

The Ghasha project is the world’s largest offshore sour gas development, ADNOC says, and plays a key role in ADNOC’s plans to meet growing domestic and international demand for gas, as well as enabling gas self-sufficiency for the United Arab Emirates.

Production from the concession is expected to start around 2025, ramping up to produce more than 1.5 billion standard cubic feet per day before the end of the decade.

Each contract has a fixed term of ten years, with the IDS portion adding $40 million per year to the company’s previous Oilfield Services revenue guidance.

ADNOC Drilling’s 50 years of experience and robust delivery track record, including pioneering work with drilling from artificial islands, make the company the natural partner to ADNOC in the development of the project. Up to 46 wells can be drilled from a single artificial island, significantly minimizing the project’s environmental footprint.
The awards reinforce ADNOC Drilling’s unique role as the sole provider of drilling services to ADNOC.

Since ADNOC Drilling launched its IDS offering in 2018, the company has delivered more than $250 million in savings for its customers through the delivery of start-to-finish wells. Drilling and completion services are a crucial link in ADNOC Drilling’s strategy to maximize value from every well, while minimizing its environmental footprint.

Already a market leader in the region, ADNOC Drilling is committed to expanding its offering to further capitalize on market opportunities. The company plans to double its delivery of IDS wells in 2022, and double its IDS-capable fleet by 2024, which will support the doubling of OFS revenues by 2025. The Ghasha award accelerates the Company’s ability to achieve and exceed those targets.

Following an initial public offering in October 2021, ADNOC Drilling has demonstrated strong and resilient growth. In the first quarter of 2022 the Company delivered revenue of $601 million, a 15% year-on-year increase, leading to a 59% increase in net income to $175 million.