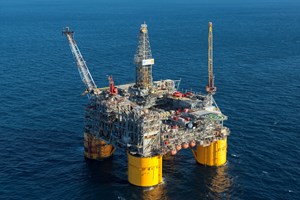 The move marks a change in government policy from last year, when the UK oil and gas industry faced a bleak outlook as the government focused on hosting the COP 26 climate talks. But with energy prices soaring on the impact of Russia’s war in Ukraine, Britain is now seeking ways to keep domestic oil and gas resources flowing.

In a new environmental statement submitted in March, Shell said it would reduce venting and change a treatment process at Jackdaw which would lower the amount of emissions from the project.

The UK’s Offshore Petroleum Regulator for Environment & Decommissioning approved the project saying it “will not have any significant effects on the environment,” according to a letter dated May 27.

Shell welcomed the news, saying it plans “to move ahead with the project, which has the potential to produce 6.5% of UK gas production at a time when UK energy security is critically required.”

“Jackdaw gas field - originally licensed in 1970 - has today received final regulatory approval.
We're turbocharging renewables and nuclear, but we are also realistic about our energy needs now.
Let's source more of the gas we need from British waters to protect energy security.”

New oil and gas projects in the U.K. North Sea have dwindled in recent years as investors urged the industry to curb spending and environmental activists pressured it to tackle climate change.

The Jackdaw field has attracted the wrath of environmental groups. At the doors of Shell’s annual general meeting last week, protesters could be seen with “Stop Jackdaw” placards.

While the government announced last week a 25% windfall tax on oil and gas companies, the proposal also includes an 80% new-investment allowance that means energy companies can reduce the amount they pay if they commit to new capital expenditure on energy projects.

A Shell spokesperson said that local gas would be a key part of the UK’s transition to net zero and is part of its plans to invest as much as £25 billion in the country. “However, as we have repeatedly stated this can only happen with a stable fiscal policy and we continue to look to the government for those assurances.”