(Bloomberg) — Billionaire Harold Hamm is poised to throw off the shackles of shareholder discipline so that Continental Resources Inc. can maximize windfall profits. 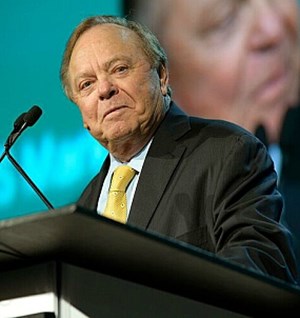 The wildcatter who pioneered what was once the premier US shale-oil field moved Tuesday to end his 15-year flirtation with public ownership. By taking private the company he and his family already control, Hamm will be free to expand drilling and acquisitions without other investors second-guessing his plans.

He’s been dropping hints for years that he might take this path, bristling at the restrictions he says are placed on executives who run publicly traded drillers. Hamm told Bloomberg TV in December that closely held oil companies have “more freedom” to pursue opportunities without having to explain strategy to shareholders and analysts.

“There are some people in the industry that are very large, and the way they make decisions is more personal, more long term,” said Tom Loughrey, president of research firm Flow Partners LLC. “They work on a different playing field than the public companies. Harold is a very big guy.”

Publicly traded oil explorers are under increasing pressure to devote cash flow to dividends and buybacks rather than big increases in crude output. As a result, most appear to be capping production increases at 5% or less this year, despite the lure of sky-high oil prices and a looming supply-gap crisis.

Conversely, closely-held rivals face no such pressure and are expanding at will. In fact, private explorers have been the most aggressive drillers for almost the past two years, accounting for almost 70% of rig deployments during that period, JPMorgan Chase & Co. said last month.

Hamm was stung in February when the company announced a major increase in drilling outlays; Continental’s stock was hammered, falling as much as 13% in a single day.

The 76-year-old explorer on Tuesday offered $70 a share for Continental stock he and his family don’t already own. The shares soared, closing at 6% above Hamm’s bid price, before surrendering some of those gains in early trading Wednesday.

The Hamm family collectively owns 83% of the outstanding shares, according to the company’s announcement. Hamm has been expanding his grip on Continental through stock purchases while the company itself resumed a $1 billion buyback program last year. In 2021, Hamm purchased more than 1 million shares himself.

On more than one occasion, Hamm publicly pined for a return to the private ownership structure that prevailed at Continental before its 2007 IPO. In 2019, when oil stocks were on a five-year, 40% slide, he told analysts and investors that he saw little benefit in remaining publicly traded.

“The public industry has been very constrained and will continue to be very constrained from a drill bit perspective,” said Matthew Portillo, an analyst at Tudor, Pickering, Holt & Co. said during a phone interview. “Private operators have less constraint on them from their shareholders, so there may be a shift in broader capital allocation for Continental moving forward to maybe be a bit more drill-bit focused.”

Hamm appeared to endorse that analysis in a statement to employees.

“The opportunity today is with private companies who have the freedom to operate and aren’t limited by public markets,” Hamm told workers in a message on Tuesday. “It will enhance our ability to maintain our competitive edge and will also enable us to be even more nimble in our efforts to create value through the drill bit.”