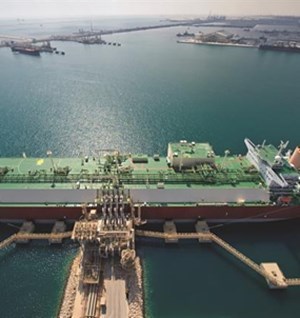 Qatar is expanding production of liquefied natural gas amid a worldwide energy crunch. Global demand for the fuel is soaring as European nations race to wean themselves off Russian gas supplies in the wake of Moscow’s attack on Ukraine.

TotalEnergies will get a 6.25% equity stake in the first phase of the plan, state producer Qatar Energy said on Sunday. Known as North Field East, it will cost almost $29 billion and include the construction of four LNG liquefaction units, or trains. It will increase Qatar’s annual capacity to 110 million tons by 2026 from 77 million. The French firm will own 25% of a joint venture with Qatar Energy, with the venture in turn holding 25% of North Field East.

Those three companies and TotalEnergies all have stakes in Qatar’s existing production facilities.

“Suddenly, because of the tragic events in Europe, everybody is rushing to get LNG,” TotalEnergies CEO Patrick Pouyanne said. “Appetite is strong.”

The roughly three-year negotiations went on “a little long, to be honest,” he said, without disclosing how much TotalEnergies will invest. The energy minister and his team were “very good defenders of Qatari interests in this process.”

Kaabi previously said Qatar Energy might look for investments to fund around 30% of the expansion. The country received bids for double the equity on offer, he said on Sunday. No company will get a stake larger than TotalEnergies, he said.

Pouyanne said the deal would strengthen Europe’s energy security and aid the continent’s long-term goal of using less coal and oil. While gas emits carbon when burned and methane leaks are common in the industry, it’s a cleaner fossil fuel.

“It is good news for the fight against climate change as gas and LNG are key to support the energy transition,” the CEO said.

Qatar Energy has started drilling development wells for the North Field East project. It chose Chiyoda Corp. of Japan and London-based TechnipFMC Plc to do the main construction work.

Kaabi, the energy minister, said Qatar would announce partners for a separate expansion, known as North Field South, by the end of the year. That, to build an additional two trains, will increase the Persian Gulf state’s LNG capacity to 126 million tons a year, and won’t be finished until 2027.

Most of Qatar’s gas is contained in the North Field, an offshore behemoth extending into Iranian waters. The shallow waters and plentiful reserves mean Qatar can pump gas more cheaply than just about any other country.

Qatar is considering further expansion projects due to the sheer demand for LNG in the wake of the Ukrainian conflict, Bloomberg has reported.

Still, the multiyear length of the plans mean European buyers will have to look elsewhere for alternatives to Russian gas in the meantime. Most of Qatar’s LNG is shipped to Asia under long-term contracts that Doha has said it won’t cancel to help Europe.

The war in Ukraine prompted Germany to push ahead with a previously shelved plan to construct two LNG import facilities at Brunsbuttel and Wilhelmshaven. Qatar is ready to invest in those terminals, Kaabi said, without giving further details.

North Field East is Qatar’s first gas project since it ended a self-imposed ban on further development, which lasted 12 years. While Qatari LNG production stayed flat, flows from the U.S. and Australia surged as new plants started operating. The three compete to be the world’s biggest LNG exporter, though the U.S. is likely to build a significant lead this year, according to Goldman Sachs and research firm Kpler.

Gas prices rose to record levels in Europe and Asia soon after Russia’s invasion. They’ve since fallen but remain far higher than a year ago.

“The tightness in the LNG market is now,” Kaabi said. “But with North Field East and North Field South we should have a lot of extra volumes. A lot of buyers are talking to us, whether it’s in Europe or Asia.”

Qatar will probably increase the proportion of its gas sales to Europe to 40%-50% once the extra gas is flowing, he said.