Fast forward to 2022 and that deal has been signed, alongside agreements with Bulgaria to Poland to bring in American fraced gas to European shores. 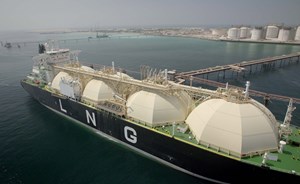 The war in Ukraine has prompted Europe to reshape its energy policy, and once-snubbed U.S. LNG is now a key part of a European Union’s strategy to wean itself off Russian gas expected to be outlined this week. As countries from Germany to Italy seek to reduce their reliance on Moscow, security of supply is in many cases trumping climate concerns.

LNG is polluting not only because it’s a fossil fuel, but also due to the way it’s extracted, turned into a liquid in an energy-intensive process, and shipped across the globe. US supplies tend to be dirtier than from other countries as they come from several thousand shale wells. But American producers seeking to woo European clients are taking steps to cut their footprint.

“Currently, security of supply is of key importance, but we need to keep the broader picture in mind,” said Danielle Stoves, commercial director for Hanseatic Energy Hub, one of the LNG terminals that Germany plans to build to reduce reliance on Russia. “We are observing that the LNG industry is taking the task to mitigate methane emissions seriously.”

Europe is at the forefront of climate ambitions, with a plan to reach net-zero by 2050, which includes replacing fossil fuels with renewable-energy sources such as solar and wind. But with the EU now seeking to cut two-thirds of its Russian gas imports already this year, LNG is regaining is allure.

The European Commission is set to announce on Wednesday a 195-billion-euro ($203 billion) overhaul of its energy strategy. The plan is expected to include replacing around 50 billion cubic meters of Russian gas with LNG, or about a third of pre-war imports.

“The current EU directive to procure more US LNG is essentially a U-turn,” said Kaushal Ramesh, an analyst at Norwegian consultants Rystad Energy. “While this may suggest that the EU may have softened its stance on the emissions impact of US LNG -- energy security over environmental concerns for now -- it may also accelerate an energy transition within the US LNG sector.”

The production process of U.S. LNG is more CO2-intensive than that of Russian gas, according to Wood Mackenzie Ltd. But add the dangerous and unreported methane leaks coming from old pipelines that run 3,000 to 4,000 kilometers through Siberia put Russian gas can at times produce more emissions overall than American supplies.

Transporting gas through Russian pipelines is three times more climate intensive than shipping it from the US, according to a report by Rocky Mountain Institute.

“By replacing high-emitting Russian gas with US LNG, Europe may be able to improve its energy security and reduce its greenhouse gas footprint,” said TJ Conway, a principle at RMI’s climate intelligence team. “But our modeling shows that emissions could vary widely and indeed remain high, especially if methane is not effectively managed.”

Methane is a far more potent greenhouse gas than carbon dioxide, but it only hangs around in the atmosphere for a couple of decades instead of centuries. Any efforts to reduce it could deliver a quick win for the planet.

Better transparency is needed to accurately access the climate impact of both Russian gas and American LNG. Cheniere Energy Inc., the top US shipper of the super-chilled fuel, plans to disclose to its customers later this year the carbon intensity of every cargo and quantify emissions starting from the wellhead.

NextDecade, which finally signed the deal with Engie, aims to reduce CO2 emissions from its LNG plant by more than 90% via a technology that captures and stores carbon.

Still, environmentalists are concerned about locking in more reliance on natural gas, no matter where it’s coming from. Europe is building new LNG infrastructure, with at least six new facilities announced in countries including Germany, Estonia and the Netherlands.

“The EU has those climate neutrality goals, but having them there doesn’t necessarily guarantee that they are met,” said Murray Worthy, gas campaign leader at non-governmental organization Global Witness. “Building new LNG infrastructure will lock-in or slow down the phase out of gas in homes, heating, industry and power. Once these things are built, the financial incentives to run them for their full lifetime are huge.”