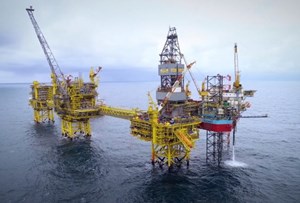 The government was focused on hosting the COP 26 climate talks and environmental groups were close to killing off one of the country’s largest oilfield developments, called Cambo. An industry that had excelled at prolonging its lifespan was at risk of sudden death.

Russia’s invasion of Ukraine and the subsequent spike in fuel prices changed all that. Pariah oil CEOs who were “not welcome” at the Glasgow climate summit are now invited to Downing Street and encouraged to increase investment due to worries about where the nation will get its oil and gas.

“We’re seeing commentary that is much more supportive from the Prime Minister,” said Gilad Myerson, chairman of Cambo developer Ithaca Energy Ltd. “The view is that energy security is absolutely critical.”

The U.K. got less than a quarter of its oil supplies from its own fields last year, compared with about 9% from Russia. And domestic output is dropping fast — down by 10% in the first quarter from a year earlier after companies cut investment or spent their cash elsewhere.

The decline could be halted and the current flow of hydrocarbons maintained for a decade if the country developed all remaining commercially viable resources, according to Wood Mackenzie Ltd. That would hardly be transformational for the U.K. economy — the North Sea is too old for such feats — but it would make it a lot easier for the country to implement the ban on Russian oil and gas announced March.

Cambo may prove to be a test case for whether North Sea drilling really can undergo a revival.

The untapped reservoir that sits some 80 miles west of Scotland’s Shetland Islands isn’t a game changer in terms of resources. It holds about 170 million barrels of oil equivalent, or less than two days of global demand. It was a matter of unfortunate timing that made the field a totemic battleground between people who believe the U.K. needs to have an active oil and gas industry for decades to come, and those who say investing in hydrocarbons today is incompatible with the country’s climate goals.

Ever since it was reported that the development was set to be approved by the authorities in the run up to the COP 26 meeting, Cambo became a rallying cry. Environmental groups campaigned against it, Scotland’s own First Minister asked Westminster to rethink its approvals for undeveloped oil and gas licenses. The CEO of Shell Plc was admonished on stage at a TED Talk by an activist for having a stake in the field.

After months of pressure, Shell said in December that the economic case for the development was no longer strong enough. That decision came two months after the company’s Jackdaw gas development failed to get regulatory approval on environmental grounds.

The double-whammy appeared to be the death knell for any new North Sea projects. A sudden stop to drilling would cause output to drop much faster, making the country more dependent on imports just as global energy security became much more tenuous.

The Russian invasion of Ukraine has roiled energy markets in countless ways. Yet one consequence is an improvement in the prospects of Cambo and other fields including Rosebank, Marigold, Brodick and Shell’s Jackdaw — which has submitted a new application.

“I think that there’s going to be a much higher chance that these fields will be approved in order to maximize domestic energy production,” said Myerson.

It’s not just the fact that oil and gas prices are higher, the political ground has also shifted. U.K. Prime Minister Boris Johnson has promised a new licensing round for exploration, while Business Secretary Kwasi Kwarteng has said he will support more drilling.

Kwarteng wrote to North Sea producers in April laying out ways he would remove obstacles to help bring projects to fruition. After standing on the sidelines last year while Cambo was attacked by environmental groups, the government now promises “not to bend to the will of activists who naively” want to end U.K. production at the expense of the country’s energy security.

Three days after Kwarteng sent his letter, BP Plc announced its plans to invest as much as £18 billion ($22 billion) into the U.K.’s energy system. Shell has released new details of its own plans to pour as much as £25 billion into the region. That’s not all for oil and gas. Both firms, which have pledged to achieve net-zero carbon emissions by 2050, said three-quarters of the investments will go into low-carbon energy.

On Tuesday, smaller producer Neptune Energy said it would spend $1 billion over the next five years to support the country’s energy security. The private equity-backed firm operates around 11% of the U.K.’s gas supply.

On Cambo, Shell says its position hasn’t changed and it’s more focused on Jackdaw. The company is hoping to talk to the government and get the approval process going, said Chief Financial Officer Sinead Gorman.

The government’s promise of a fresh licensing round later this year sends a strong message of support to the industry. But even if drilling does increase there’s no guarantee it will bear fruit. No commercial discoveries have been made on new acreage awarded in the last 10 years of licensing rounds, said Neivan Boroujerdi, Wood Mackenzie’s principal analyst for upstream North Sea research.

Kpler estimates that U.K. production of crude and a light oil called condensate in the first quarter of the year averaged 680,000 barrels a day. That’s down 10% from a year earlier and just a quarter of the basin’s peak output in 1999. If the industry develops all existing resources that are economic, domestic production could be maintained at current levels until the end of the decade, said Boroujerdi.

Merely stabilizing output at existing levels would hardly be transformational for the U.K. economy, but it would be a successful outcome for a region that’s been producing continuously since the 1960s.

The U.K. would still be heavily reliant on oil and gas imports, something that’s unlikely to change as long as those fuels account for 80% of the country’s energy use, said Dieter Helm, a professor of economic policy at Oxford University.

Even the industry’s strongest proponents acknowledge that North Sea oil and gas is no energy-security panacea.

“The U.K. needs to develop as much renewables as it possibly can as well as invest in hydrocarbons,” said Ithaca’s Myerson.