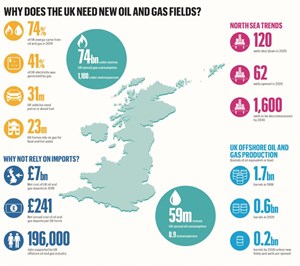 OEUK has called on the government to try to enact the bill by the end of 2022. The aim should be to minimize any uncertainties over the future rules and taxes affecting the industry – creating a clear investment landscape.

This would encourage investors to spend the money needed to maintain flows of oil and gas in the short-term while simultaneously allowing those same companies to also build the energy systems of the future such as offshore wind and mass hydrogen production.

“The UK’s offshore industry is providing the nation with the oil and gas needed to keep homes warm, fuel its vehicles and businesses and generate its electricity,” said Deirdre Michie, OBE, chief executive of OEUK.

“Last year the offshore industry and the UK government signed up the North Sea Transition Deal, a partnership aimed at achieving net zero by 2050. The Energy Bill announced in today’s Queen's Speech should build on that partnership. Our industry remains committed to working with government. But any period of protracted uncertainty risks undermining investor confidence.

“So, it’s important that this bill is put in place as soon as possible and that it also creates a stable landscape for investors, which in turn is supported by a predictable and competitive tax structure. That would give our industry the confidence to attract investment, support energy security, and help the government reach its target of achieving net zero by 2050.”