An analyst at Evercore ISI, which tracks many market and regulatory factors affecting oil and gas, says he has been getting questions this morning about the Monday/Tuesday overnight news that Senator Joe Manchin (D-W.V.) convened a bipartisan group, together with Senator Lisa Murkowski (R-Alaska), to discuss a bipartisan energy bill. News reports are framing this effort as potentially reviving some elements of President Joe Biden’s moribund “Build Back Better” legislation. 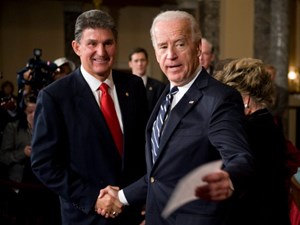 “Contrary to the tone of some news coverage, we see this as bad news, not good news, for the prospects of energy legislation before the mid-term elections,” said Tobin Marcus, who handles Global Policy and Political Analysis at Evercore. “We are very skeptical that Republicans will be willing to support a package that many will see as bailing out President Biden, both substantively and politically. Even if there were genuine bipartisan interest in a package, the mid-terms are approaching fast, and we are skeptical that this effort could get over the finish line from a standing start in late April.”

Marcus said his firm’s expectation that Manchin might pivot in this direction was part of the reason they saw the hopes for a reconciliation deal fading earlier this week. If these bipartisan talks drag on for weeks, Marcus maintains that the odds of a reconciliation bill will rapidly trend toward “zero.” With action on energy looking less likely before the mid-terms, it increasingly looks like the lame duck session between November’s mid-term elections and the next Congress taking office in January will be “a frenetic period” for attempted bipartisan deals on topics including energy, taxes, cannabis, and election integrity.

Things take time in Congress.  As a starting point for his skepticism, Marcus said that negotiating substantial bills in Congress is very time-consuming, even when everyone is motivated to get them done. The bipartisan infrastructure negotiations of last summer took about two months, from early June to late July. “This two-month timeline played out in a less-polarized period in the Senate last summer,” noted Marcus, “with the next elections over a year away. If Manchin and Murkowski’s bipartisan energy negotiations were to go similarly, that would put us near the July 4 recess, which is close to the last moment at which we could realistically see meaningful new legislation this summer.”

And of course, even though a bipartisan infrastructure deal was struck in the Senate in July, the bill was not signed into law until November, as House progressives held up the bill, in an attempt to gain leverage in reconciliation talks. Marcus said he saw no reason to believe that House Democrats will be in a rush to move a Manchin-led bipartisan Senate energy bill this summer either, even if such a bill were to materialize.

“We would also note that even though the infrastructure negotiations succeeded last year, bipartisan deal-making by small groups of senators is by no means a silver bullet,” explained Marcus. “The bipartisan talks about Electoral Count Act reform earlier this spring petered out with no results. We will, of course, be watching these energy negotiations for any signs of real progress, but our initial expectation is that they will go nowhere fast.”

Republicans would give Biden a political gift with this package. Leaving aside the very challenging timeline, Marcus and his Evercore colleagues are quite skeptical that Senate Republicans will be willing to sign on to a package that will widely be seen as bailing out President Biden and the Democrats. A bipartisan deal would need 10 Republicans on board to get 60 votes in the Senate, so support would need to extend beyond just a handful of moderates like Murkowski.

Even though a bipartisan energy bill would mean some concessions for Democrats (Manchin wants more oil and gas drilling, pipeline approvals, and easier permitting of energy projects, among other things), this would be a political and substantive gift to Democrats for a number of reasons, said Marcus:

“We do not believe that these considerations are lost on Senate Minority Leader McConnell and other Republican leaders,” continued Marcus, “and we are skeptical that 10 Senate Republicans would be willing to defy leadership to back a bipartisan energy bill so close to the mid-terms.”

Even a few weeks of unproductive talks could run out the clock.  If, as Marcus expects, these talks fail to produce a viable bipartisan deal, it is very likely that even a few weeks of time wasted on fruitless talks would be enough to kill any remaining hopes for a Democrats-only reconciliation deal. “We were already skeptical that Democrats could salvage a reconciliation bill, given the lack of progress to date,” said the analyst. “If Manchin spends even two to three weeks on these talks before concluding that there is no bipartisan compromise available, it is hard to imagine that Democrats could then turn back to reconciliation and get something done in May-June.”

Marcus said that he fully expects that vague positive statements from the White House and Senate Democratic leadership about the possibility of a narrow reconciliation deal will continue. “They have no incentive to antagonize Manchin at this point, and no reason to firmly close the door on a reconciliation bill,” he explained. “Indeed, we have heard this morning that Majority Leader [Chuck] Schumer’s office is continuing to indicate they are hopeful about identifying a “lowest common denominator” reconciliation package (with no details offered). We will be taking these statements with more than a few grains of salt,” concluded Marcus.