(Bloomberg) — The global oil industry is on pace to repeat or even surpass the heady days of 2008 when crude ascended to dizzying heights and drilling profits soared, according to the world’s biggest oilfield contractor. 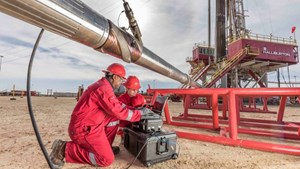 In the sector’s most bullish forecast yet, Schlumberger told investors and analysts Friday that the widespread disarray set off by Russia’s invasion of Ukraine is creating growth opportunities last seen during the so-called supercycle of 14 years ago.

Exploration companies are now expanding the search for crude from onshore shale fields to the deep seas, spurred at least in part by a widespread aversion to Russia’s oil since it went to war in late February, Chief Executive Officer Olivier Le Peuch said during a conference call.

“The combination of these effects creates an exceptional sequence for our sector, likely resulting in a cycle of higher magnitude and duration than previously anticipated,” Le Peuch said after the company disclosed its strongest first-quarter margins since 2015 and rewarded investors with a surprise dividend increase.

Le Peuch’s optimism was the culmination of a week in which his biggest rivals -- Halliburton Co. and Baker Hughes Co. -- unveiled similarly positive, if more modest, business outlooks.

Halliburton, which controls more fracing capacity than any other company, predicted North American explorers will boost spending by 35% this year, up from a pre-war forecast of 25%.

Meanwhile, Baker Hughes estimated that overseas growth will reach the low- to mid-double digits, while North America will see a 40% boost this year.

“We expect global oil and gas supply to remain constrained in the coming years which should support higher commodity prices and multiple years of spending growth from our customers,” Baker Hughes CEO Lorenzo Simonelli said earlier this week during a call with analysts and investors. “Recent geopolitical events have severely constrained what was already a tight global natural gas market and have refocused the world on the importance of energy, security, diversity and reliability.”

Often the first to feel the pain in a oil-price bust and the last to benefit from a boom, oilfield servicers are looking to cash in on the global energy rally.

Schlumberger’s allusion to 2008 resonates with oil-market veterans, for in that year international crude surged above $145 a barrel in a so-called supercycle that only ended when financial markets collapsed under the weight of the mortgage crisis.

Since then, the oil-services sector added capacity in order to meet customer demand only to run headlong into a worldwide crude glut that crushed prices and their order books. A wave of bankruptcies in subsequent years helped chew through that oversupply of gear, positioning contractors like Liberty Oilfield Services Inc. to capitalize going forward.

“The emerging cycle is likely to last longer and be characterized by a much slower and more modest rise in active frack,” Liberty CEO Chris Wright said. “It is encouraging to see improving returns moving the last sector that has yet to see them in the oil and gas industry: energy services.”