(Bloomberg) — More than 100 people died in an explosion at an illegal oil refinery in southeastern Nigeria over the weekend, demonstrating the dangers associated with an illicit industry that thrives in the crude-producing region. 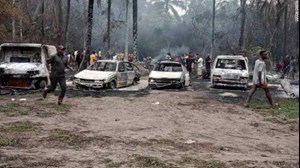 The blast at a site in the Abaezi forest during the night of April 22-23 killed at least 110 people, said Ifeanyi Nnaji, head of operations for the Nigerian government’s National Emergency Management Agency in Imo state, where the accident happened. Local authorities are planning “a mass burial of the many corpses,” he said by phone on Monday.

Africa’s largest crude producer loses as many as 150,000 barrels of oil a day, or about 10% of its current output, to criminals that tap the pipelines crisscrossing the Niger Delta region, according to government estimates. At current prices, the missing barrels are worth almost $5.6 billion a year. Some industry figures believe the true scale of theft is even higher.

Much of the pilfered oil is redirected to the makeshift camps that have proliferated in the Delta’s creeks and forests where it is turned into gasoline, diesel and kerosene. The explosion near Imo’s border with Rivers state killed traders and refinery workers, Nnaji said.

President Muhammadu Buhari declared the event a “catastrophe” and instructed security agencies “to intensify the clampdown on illegal refineries,” according to a statement by his spokesman. The financial backers of the site “must all be caught and made to face justice,” it said.

The government blames the country’s inability to meet its OPEC+ production quota at least in part on crude theft. Average output in March was 1.24 million barrels of crude oil a day, according to data published by the Nigerian Upstream Petroleum Regulatory Commission. The nation’s daily OPEC limit stood at 1.7 million barrels at the time, according to data compiled by Bloomberg.

While dangerous and unlawful, manufacturing and trading fuel is popular in the Delta where many are unemployed and few occupations offer comparable incomes.