(Reuters) — Australia's Santos Ltd. is locked in a dispute with ConocoPhillips over road access in Alaska, potentially holding up a $3 billion oil project, according to letters from both companies to the U.S. state's government. 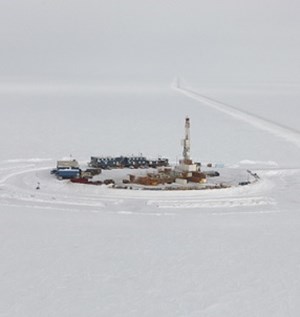 The dispute could also delay Santos's planned sale of its majority stake in the project, which could thwart its target of raising $2 billion to $3 billion from asset sales in 2022.

ConocoPhillips, the largest oil producer in Alaska, is seen as a potential buyer of that stake.

Santos is the operator of the Pikka oil project on Alaska's North Slope, acquired during its takeover of Oil Search last year. In February, it flagged that the project would be ready for a final investment decision by mid-year.

The Pikka project, the biggest new oil prospect on Alaskan state land in decades, is next to ConocoPhillips' Kuparuk River Unit (KRU) oil fields. Santos needs access to Kuparuk's roads for its operations, the company said in a Feb. 9 letter to the Alaska Department of Natural Resources.

After rebuffing a ConocoPhillips' proposal for Oil Search to pay $95 million for long-term use of its Kuparuk roads, Oil Search applied to the Department of Natural Resources for a permit to access those roads, which are on state land.

The department approved the land use permit on March 29 to smooth the way towards development of the Pikka project until the companies reach a road use agreement.

"We always prefer and encourage private entities to work out mutual agreements for things like surface access amongst themselves on fair commercial terms and continue to expect that will ultimately be the long term solution here," Derek Nottingham, the department's oil and gas director, said in an emailed comment to Reuters.

A Santos spokesperson said the company was satisfied with the state's decision and still aims to have Pikka ready for a final investment decision in "mid-2022".

ConocoPhillips has the right to appeal the issue of the land permit by April 18.

The land permit "does not acknowledge the KRU's rights of ownership and investments in the road infrastructure", a ConocoPhillips spokesperson said in emailed comments to Reuters.

In a March 23 letter to the natural resources department reviewed by Reuters, ConocoPhillips said it proposed a $95 million one-time payment for use of its roads, in line with road fees Oil Search proposed two years ago when it sought debt funding from Alaska's state development bank to build roads and bridges for Pikka.

In the letter, ConocoPhillips said Oil Search was insisting the commercial costs of KRU road use were "impeding the Pikka Unit project from progressing to a final investment decision" and the company needed free access to allow the project to advance.

ConocoPhillips previously held talks with Oil Search to buy a 15% stake in Pikka, but Australian media reported the U.S. independent walked away because Oil Search refused to give up operatorship.

The Pikka project is co-owned by Spain's Repsol SA.