The UK will have to import almost all its gas and most of its oil from overseas suppliers unless billions of pounds are invested in new North Sea exploration and production facilities, a report from Offshore Energies UK has warned. 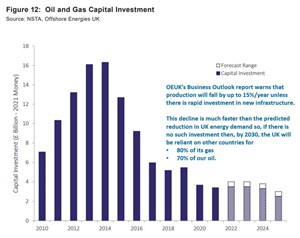 Without new investment, by 2030 around 80% of UK gas supplies and more than 70% of oil will have to be sourced abroad, according the 2022 Business Outlook report from OEUK, whose 400 members embrace established industries like oil, gas and offshore wind, plus emerging technologies like hydrogen production and CO2 capture.

It finds that, although there are enough oil and gas reserves to support the UK for at least 15 years, there has been too little investment in the platforms, pipelines and other infrastructure needed to access it.

Offshore wind, whose expansion has been a major success for the industry, is still too small to be able to replace the declines in oil and gas output from the North Sea – although this is expected to change over decades.

“Production of oil and gas will fall by up to 15% a year unless there is rapid investment in new infrastructure,” the report will say. “This decline is much faster than the predicted reduction in UK energy demand so, if there is no such investment then, by 2030, we will be reliant on other countries for around 80% of our gas and 70% of our oil.”

The research, led by Ross Dornan, OEUK’s market intelligence manager, offers some stark insights into the impact on the UK if there is insufficient investment in energy – including offshore wind. These include:

Investment in the oil and gas sector has fallen from about £16 billion/year in 2014 to £5.5 billion in 2019 and a predicted £4 billion this year. The causes are varied but the UK’s complex regulatory environment, plus the political disagreements around issues like climate change and windfall taxes are all factors deterring investment.

Offshore wind, the most successful form of renewable energy to date, also requires significant investment if its expansion is to continue. The OEUK report finds that the UK must invest £60 billion in 3,000 new offshore wind turbines if it is to meet its target of quadrupling wind-powered electricity generation by 2030.

Ross Dornan said: “About 75% of the UK’s total energy comes from oil and gas - about 2% up on last year. That is because 80% of our homes are heated by gas which is also used to make 42% of our electricity. We also have 32 million vehicles that rely on petrol and diesel.

“The energy gap between what we produce ourselves and that which comes from other nations will keep growing unless we invest in exploration and production on the UK’s continental shelf. We must also accelerate the development of cleaner energy like hydrogen. Investment now will give us energy security in the years to come.

“Additionally, the emissions generated by processing and transporting our own oil and gas are much lower than for imports.”

Deirdre Michie, chief executive of OEUK, said: “Our industry is changing just like the countries it serves. We are proud to have provided most of the nation’s energy for the last five decades. We are also very proud to have paid £375 billion in UK production taxes alone over that same period. We are still contributing. By 2027, that cumulative sum is forecast to rise to £400 billion.

“Last year OEUK signed the North Sea Transition Deal, a partnership with the UK government supporting the nation’s transition to a lower-carbon future and providing safe and secure energy throughout that transition. But that transition will only happen if our policymakers can create and sustain the right environment for long-term investment across all forms of energy production.

“To achieve that we need stable long-term regulatory policies, clear and predictable fiscal policies and improved political alignment across all the countries and parties of the UK.

“Energy security is now a matter of national security. Our policymakers need to plan not just for the coming elections but the coming decades.”