(Bloomberg) — TotalEnergies SE is working on a plan to develop gas discoveries in South Africa with its partners and the government, according to its managing director in the country. 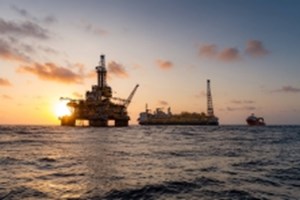 The oil major starting in 2019 has made discoveries of gas and condensate -- a light liquid hydrocarbon -- offshore the most industrialized nation in Africa. After overcoming strong offshore currents to drill the wells, the company is now in talks “on how we can make it happen,” Mariam Kane-Garcia, TotalEnergies South Africa managing director said at a conference in Cape Town.

Realizing the development would be a step toward advancing South Africa’s transition away from coal to cleaner energy and potentially revive some fuel-production capacity from a declining number of operating refineries. The country currently lacks significant domestic gas production.

Africa Oil Corp., one of Total’s partners, has said the group is contemplating a phased development of Block 11B/12B. First production from the field could start by 2027 and supply state-owned PetroSA’s 45,000-barrel-a-day Mossel Bay gas-to-liquids plant and gas-to-power stations, according to IHS Markit.

If a final investment decision “is not taken right now, we would hope to be in a position to take it sooner rather than later,” Kane-Garcia said, without providing further detail. Total hasn’t changed its view on investments based on the recent surge in gas prices, she added.