(Bloomberg) — The U.K. is planning to significantly raise targets for offshore wind power as part of its drive toward energy self-sufficiency in the wake of Russia’s invasion of Ukraine, two people familiar with the matter said. 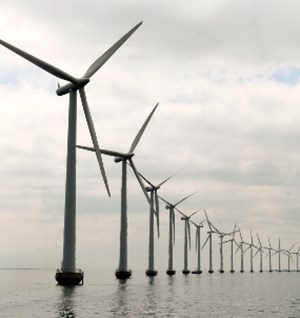 The goals -- including for floating wind turbines -- will form part of an energy security plan that was promised earlier this month by Prime Minister Boris Johnson, which is set to be unveiled next week by the government.

The strategy’s focus will be on accelerating deployment of technologies that the U.K. is already pursuing, according to the people, who requested anonymity talking about policy that hasn’t yet been announced. There will also be a component that aims to reduce demand for power and heating by increasing the energy efficiency of buildings, they said.

The war in Ukraine and its impact on global energy markets has put into sharp focus the U.K.’s dependence on imports to heat homes, fuel cars and generate electricity. Johnson has pledged to ban imports of Russian oil by the end of the year, and ministers are also looking at halting imports of Russian gas.

But with inflation a major concern -- economists warn it could reach double digits this year -- Johnson this week acknowledged that freezing Vladimir Putin’s Russian administration out of global energy markets will be “painful.”

“We need permanently to reduce the cost of energy at source -- and that will only happen if our supply is more secure, more sustainable and less vulnerable to manipulation by others,” the prime minister wrote in an op-ed for the Daily Telegraph newspaper. “Renewables are the quickest and cheapest route to greater energy independence. They are invulnerable to Putin’s manipulations.”

Johnson said green energy of “all kinds,” including tidal, hydro, geothermal and solar power, will be at the center of what he called the “British Energy Security Strategy.” He pledged to “double down” on wind power, and said that now is also the time to “make a series of big new bets on nuclear power.”

The people familiar declined to say what the new targets for wind power will be. The U.K. is already a world-leader in deploying the technology, with over 14 gigawatts of offshore wind farms. The current goal is to expand that to 40 gigawatts by 2030 and 100 gigawatts by 2050.

The U.K. is already developing offshore wind faster than the industry expected. About 25 gigawatts was awarded rights in a Scottish auction in January, more than double what was predicted. It takes about a decade to get an offshore wind farm through planning and construction.

The government’s aim is to shorten planning horizons for both onshore and offshore wind, enabling turbines to be erected more quickly, the people said. The plan is penciled in for an announcement Monday or Tuesday, before Chancellor of the Exchequer Rishi Sunak is due on Wednesday to deliver a statement in the House of Commons on the state of the U.K. economy.

The timing could yet shift to after Sunak’s speech, according to the people.

The government is also considering changing the rules that govern the award of new permits for North Sea oil and gas fields, so that it can speed up the exploitation of domestic hydrocarbons.

“It is time to give investors more confidence in British hydrocarbons,” Johnson wrote. “That way, we will have more domestic energy resilience as we make the transition to a zero carbon future.”