Back-to-back appearances by U.S. Senators Joe Manchin (D-W.V.) and Lisa Murkowski (R-Alaska) put a dramatic flourish to the final day of the week-long CERAWeek by S&P Global conference in Houston on Friday. Using somewhat different words and personal styles, the two senators still put out the same message: The U.S. needs more of its own oil and gas production, and it’s time for the Biden administration to get behind that goal. 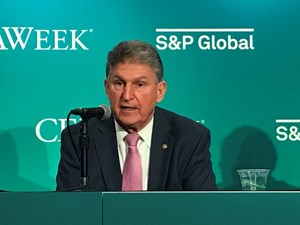 Murkowski’s points. With both senators having flown in early after voting on an Omnibus spending package for FY ’22, Murkowski was first on stage at mid-morning. In recapping the energy highlights of the last two years, she noted that “the first energy update in a dozen years was the Energy Act of 2020, to advance clean energy and grid modernization. And then this last year, we funded it, an effort that Senator Manchin and I led with a group of 10.”

Then, in the back half of last year, the Bipartisan Infrastructure Bill was passed, and it contains some energy planks, including a few that are helpful to Murkowski’s state, Alaska. “It actually started out as an effort, where some of us in the Senate looked at where we could agree on core infrastructure,” she explained. “And what we were able to put in place is a broad measure—not only rails, roads and bridges, but other things like marine facilities and broadband installations. It’s about what we could do together.”

Murkowski noted that on the moribund Build Back Better bill (or BBB), declared dead by Manchin, “we were concerned about cost and inflation. Also, when it comes to passing legislation, we need a process, and the BBB had not gone through a process. The Democrats acted like ‘well, this is our bill.’” 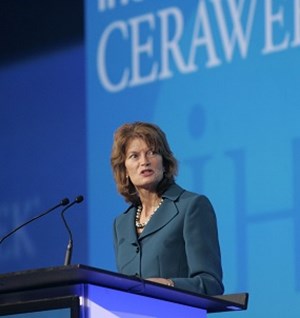 “We’ve got a lot of gas in Alaska,” continued Murkowski, who spoke in the context of the Infrastructure bill being significant for the state. “We were able to update the loan guarantee for the Alaska gas line….and the beauty of what Alaska has is that this project has gone through the permitting process. Just think, if we could bring our gas online to our Asian neighbors, think about how this could, in a global context, help our European neighbors.”

Murkowski went on to advocate a federal energy plan that would put development of U.S. oil and gas on a fast track, instead of the Biden administration looking to Venezuela and Iran for additional oil supplies. “Let us know what the five-year leasing plan is going to be. Let’s get some of these LNG export terminal permits approved that are sitting on the Energy Secretary’s desk.”

Manchin’s points. For his part, Manchin hit the stage after Murkowski, and he was definitely the star attraction for the day, if not the entire week, at CERAWeek. For at least five or six times, the large audience in the Hilton Americas ballroom erupted in applause, and it’s no wonder, given that the senator’s comments were definitely pro-oil and gas development.

“(Russian President) Putin has weaponized energy,” said Manchin. “So, we have to have a better weapon, and that can take the form of U.S. energy development. We need energy independence….we have a responsibility as the leader of the free world.”

Discussing the U.S. energy development situation further with S&P Global Vice Chairman Daniel Yergin, Manchin said, “At the top of my agenda is reliability. We have to have reliability of (energy) supply.” He also mentioned that in the year 2000, 51% of U.S. electricity generation came from coal-fired plants. Today, that figure is down to 19%. “Some people say that I killed the Climate Bill. But how the hell did I kill the Climate Bill, when we’re already down 32 points?”

Elaborating further on his disagreements with some environmentalists, Manchin noted, “The hard thing with the hard-core environmentalists is I don’t know if they know what the word “global” means. They act like the U.S. is the only one polluting the world.” That was a reference to lagging climate action by Russia and China.

On another matter, the senator took to task people that complain about the flaring of gas in the U.S., particularly in the Permian basin and other places, mostly in the central and western U.S. “People say, why are we flaring all that gas? And then we find out that the oil and gas companies would like to build pipelines to utilize the gas, but they can’t build the pipelines. And why? Well, it’s because you can’t get a permit. Well, hell you’ve (the government) created the problem!”

Asked by Yergin about what else can be done to alleviate pressure on the energy situation, Manchin said, “Well, it’s a problem with our leadership on energy. We haven’t told our story. This whole thing about 9,000 leases on federal land, they’re (the Biden administration) fixated on this. They don’t understand the process…but you have got to speak truth to power…we’ve got to be realistic. I’m hoping that this (high energy prices, inflation and Ukraine) is a wake-up call for all of us…the world is looking to us for leadership.”

World Oil will have further comments from Senators Manchin and Murkowski early next week.