(Bloomberg) — Exxon Mobil Corp. is considering a sale of assets in North Dakota’s Bakken shale after being approached by interested parties, according to people with knowledge of the matter. 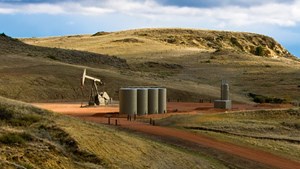 The oil giant could get about $5 billion for the Bakken assets, said the people, who asked not to be identified because they weren’t authorized to speak. Exxon is in the final round of interviewing bankers to help launch a sale process, one of the people said.

Exxon hasn’t made a final decision on pursuing a sale and its plans could still change, the people said.

A representative at Exxon, based in Irving, Texas, declined to comment.

Exxon is aggressively cutting costs in a bid to boost shareholder returns amid higher oil prices. The company also has been focused on improving the quality of its barrels and generated $3 billion of cash proceeds from divesting assets during 2021, according to its fourth-quarter results.

Bakken mergers and acquisitions activity is starting to heat up as crude prices have surged to the highest since 2008. Oasis Petroleum Inc. and Whiting Petroleum Corp. on Monday announced what they called a “merger of equals,” creating a new Bakken-focused oil producer with an enterprise value of about $6 billion.

In contrast to the much larger Permian Basin, where oil production recently surpassed its pre-pandemic high, output remains muted in the more mature Bakken oil field. Shale companies produced 1.16 million oil barrels per day from the Bakken through February, compared with 1.53 million barrels per day in November 2019 before the pandemic-related downturn, according to Rystad data.