(Bloomberg) — Shell Plc’s sale of a multibillion-dollar stake in a joint venture that operates oil fields in Nigeria has attracted bids from four local companies, according to people familiar with the negotiations. 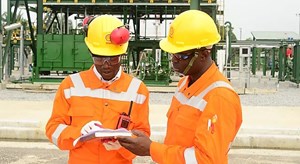 Seplat Energy Plc, Sahara Group Ltd., Heirs Oil and Gas Ltd. and ND Western Ltd. submitted the non-binding offers in January, said the people, who asked not to be identified because the discussions are not public.

Shell’s 30% operating interest could fetch as much as $4 billion, according to one of the people. Another person said Shell has yet to disclose to buyers the scale of potential future costs related to litigation or decommissioning and abandoning oil wells, which could bring down the sale price significantly.

In August, energy consultant Wood Mackenzie Ltd. valued the stake at $2.3 billion, assuming a long-term oil price of $50 a barrel. Brent crude, the international benchmark, is currently trading just below $90.

Shell is looking to complete an exit process started in Nigeria more than a decade ago, by selling its remaining onshore and shallow-water assets. The London-based oil major has been pumping crude in the West African country since shortly before it secured independence in 1960.

That lengthy association has resulted in an accumulation of accusations, lawsuits and reputational damage as numerous local communities have been afflicted by oil spills and other forms of pollution. Investors are also keen for Shell to transition to cleaner forms of energy.

Even after a sale of the assets, Shell would retain a significant presence in Africa’s biggest crude producer as the owner of export terminals and deep-water projects.

Shell is currently evaluating the non-binding bids to see which parties to take to the next round, one of the people said. While deliberations are ongoing, no final agreements have been reached and Shell could also decide to retain the asset, the people said.

State-owned Nigerian National Petroleum Co., TotalEnergies SE and Eni SpA own the rest of the joint venture, with 55%, 10% and 5% stakes, respectively. TotalEnergies declined to comment, while NNPC and Eni didn’t respond to questions.

Seplat is Nigeria’s biggest independent exploration and production company. The company said in November that it is also in “competitive discussions” to acquire ExxonMobil Corp.’s Nigerian shallow-water business.

ND Western and Heirs Oil and Gas both entered the oil sector by buying blocks from the trio of European majors that operate in the country, the former in 2012 and the latter last year. Sahara is a large Lagos-based energy conglomerate with stakes in two producing fields in Nigeria, but better known for owning power plants and oil trading.