(Bloomberg) — Energy prices surged after Russian President Vladimir Putin signed an order to send what he called “peacekeeping forces” to the two breakaway areas of Ukraine that he officially recognized on Monday.

The S&P 500 declined 1% Tuesday, down 10% from a high in January, as investors weighed the potential damage from sanctions targeting Russia’s elite and sovereign debt abroad. The European Union and U.K. also signaled they are ready to impose further penalties unless Putin changes course. However, the Russian president has denied plans to invade Ukraine.

Gold was little changed, the dollar was flat and benchmark Treasury yields drifted at 1.93%. In European trading, the Stoxx 600 Index fell as much as 2% before recovering losses. 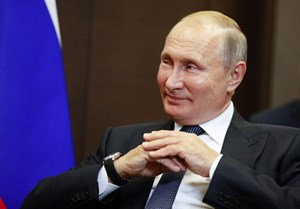 European natural gas led the gains with as much as 13% rise, helped higher by Germany halting the approval process of the controversial Nord Stream 2 pipeline. Brent oil closed in on $100 a barrel, and power and coal prices rose. Moscow’s move is a dramatic escalation in the standoff, with the U.K. responding by sanctioning five Russian banks and the European Union planning to restrict access to its financial markets. The U.S. said it plans to announce new restrictions as soon as Tuesday.

A conflict could threaten Russian energy supplies. The country is the biggest provider of gas to Europe, about a third of which typically travel through pipelines crossing Ukraine, and a major exporter of everything from crude oil to refined products.

Sanctions could also disrupt energy flows, with any curbs to Russia’s ability to trade in foreign currency having the potential to upend commodity markets from oil and gas to metals and agriculture.

“This means yet higher gas prices for longer as the market has already been very nervous for months,” said Katja Yafimava, a senior research fellow at the Oxford Institute for Energy Studies. “Some U.S., EU sanctions are likely to follow.”

Energy markets have been on edge for weeks, swinging with every twist and turn in the standoff between the West and Moscow. Europe has been grappling with a gas supply crisis that’s sent prices quadrupling in the past year. The tensions have added to oil’s blistering rally that’s also been driven by output not being able to keep up with steadily rising demand.

Russia has been keeping gas flows to Europe capped since the summer, having curbed sales in the spot market and failed to fill its storage sites in the European Union before the winter. Europe has avoided the worst prediction for the crisis including rolling blackouts, but the region still depends on Russia for a third of its gas needs.

Gas prices also rose after German Chancellor Olaf Scholz said he has directed the Economy Ministry to withdraw a report on security of supply that is needed for the approval of the Nord Stream 2 pipeline to move forward. The certification process of the pipeline, which links Russia to Germany bypassing Ukraine, has been on hold since the end of last year as the operator tries to comply with European Union rules as requested by the German energy regulator.

The treaties Putin signed with the two self-declared republics allow Russia to both send troops and build military bases in the separatist zones, according to texts submitted to parliament for ratification. Russia plans to recognize separatists claims over the entire Luhansk and Donetsk Oblasts, Interfax reported, citing State Duma member Leonid Kalashnikov. Russia denies it plans to invade Ukraine.

The European Union proposed an initial package of sanctions, targeting those behind the decision, as well as banks that finance Russian operations in the territories, the bloc said in a statement. It will also “target the ability of the Russian state and government to access the EU’s capital and financial markets and services.”

The U.S. and its allies continue to warn it could soon invade its neighbor, and just what sanctions the West chooses to impose will be key for commodity markets. Over the weekend British Prime Minister Boris Johnson said that the U.K and U.S. could stop Russian companies from trading in pounds and dollars if Moscow went through with an attack.

But Europe is in a much better position to face gas supply disruptions now than at the end of last year. Mild weather and a fleet of U.S. liquefied natural gas slowed withdraw from storages, and inventories that had fallen to a record should be back within the five-year range before the end of the month.

“We believe there is a sufficient inventory buffer for TTF prices to continue to slide lower over the European summer,” JPMorgan Chase & Co. said in a report, referring to prices on the Dutch Title Transfer Facility, Europe’s biggest hub.