(Bloomberg) — Oil prices could be set for a “prolonged period” above $100 a barrel over the next six to nine months, with the world setting fresh demand records this year, said Vitol Group Chief Executive Officer Russell Hardy. 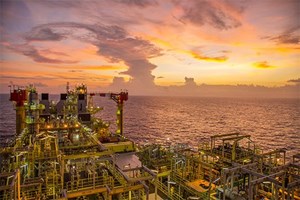 Crude already surged to within a few dollars of that level earlier this month, as the recovery in fuel use from the pandemic started to run into supply constraints. In an interview in London with Bloomberg television, the boss of the world’s largest independent oil trader said the market will get tighter, with daily consumption set to rise well above pre-Covid levels by the end of 2022.

“The 100 million-barrel number is probably going to be exceeded this year,” Hardy said. “Demand is going to surge in the second half” if travel continues to return to normal.

As some of the biggest players in oil market gather in London for International Energy Week -- the first time the event has happened in-person for two years -- their industry is still grappling with the consequences of the initial pandemic price slump.

Energy supplies are struggling to keep up with a robust economic recovery. Several OPEC+ members, plagued by under-investment and disruptions, aren’t able to revive all of the output they shut down in 2020. Many companies, from U.S. shale drillers to global supermajors, are focused on giving cash to shareholders instead of growing production.

The result is a surge in oil prices that’s feeding an inflationary spike. The situation threatens to derail the global economic recovery and inflict a cost-of-living crisis on millions. Brent crude oil for May rose to $92.08 a barrel at 2:36 p.m. in London, reversing a slump from earlier in the day.

“More crude is required,” Hardy said. With daily demand rising by the end of this year to 1 million or 2 million barrels a day above end-2019 levels, “the whole system is going to be fairly tight.”

The tightness of the market is demonstrated by a price structure in oil futures called backwardation -- where prices for near-term delivery rise above contracts for later months. This pattern is currently prevalent in crude, diesel, natural gas and coal.

“The situation we have today, where all markets are very backward, tells you there’s not much give in the system,” Hardy said. Energy supplies are only arriving “just in time at the moment, which is not a great place to be.”

The recovery in fuel demand is still uneven. In oil products, Vitol sees gasoline consumption in the U.S. down by around 400,000 barrels a day currently, compared with February 2019.

“We still think it’s being affected by work from home,” Hardy said. “People are not driving to the station, they’re not driving to work.” High prices may also be encouraging drivers to use their cars less, he said.

Instead, diesel-powered industrial transportation is fueling demand growth, but jet fuel consumption remains capped by a lack of long-haul flights.

Oil supply is growing, just not as fast as consumers need, Hardy said.

U.S. shale is increasing, but not at the same level it did during the boom years. Capital constraints from drillers and a lack of crew are also holding back production, Hardy said.

OPEC+ is gradually boosting output, and a nuclear deal with the U.S. could allow Iran to pump an extra 1 million barrels a day, but that supply is already factored in for the second half of the year, Hardy said.

“Eventually we’re going to run out of spare capacity,” he said. “That’s what the market is trying to work out -- how worried to be about that scenario.”