Deadly Nigerian oil-blast ship has peers all over the world

(Bloomberg) — The decades-old, oil-storage ship that blew up off the coast of Nigeria recently -- killing some of its crew and spewing its contents into the Atlantic Ocean -- is one of many vessels of similar vintage dotted across the globe. 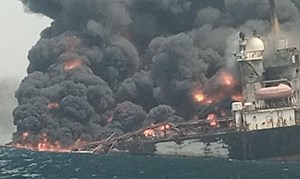 That ship, still partially floating above the surface, was first launched 46 years ago when U.S. President Gerald Ford still held office and was reconfigured for storage 25 years ago. There are over 30 others still in operation that were originally constructed before 1977, according to data compiled by Bloomberg.

Vessels like Trinity Spirit typically start out as oil tankers before reaching the end of their useful lives as transporters -- typically a lifespan of not more than 20 years. To prolong their worth as assets, they get converted to vessels that float -- usually in a single location -- producing or just storing crude for other ships to collect. They’re known as FPSOs or FSOs and they can go on for years.

“It is a challenge for FPSOs in the late stage of their lifetime, especially when there has not been sufficient maintenance and necessary upgrade, as corrosion develops and equipment condition gets worse, and system integrity is a headache,” said Zhenying Wu, a senior analyst for Rystad Energy.

The ships need to withstand harsh environmental conditions and extremes of weather, such as huge storms, rogue waves and big temperature swings. While most are rigorously looked after, their need for maintenance increases with age.

The American Bureau of Shipping, which classifies vessels for their operating safety, last year raised the need to address safety issues such as structural integrity and maintenance challenges around the global fleet of FPSOs, with over 50 of them reaching the end of their design life in the next five years. More than half are over 30 years old and a quarter over 40 years old.

The cause of the Trinity Spirit accident that killed at least two crew has yet to be determined along with the amount of crude spilled, according to the National Oil Spill Detection and Response Agency. Its conversion 25 years ago means it was at the end of a typical life of a storage ship after it’s been reconfigured.

A conversion overhaul adds about 20 years to the lifespan of a ship, according to Venediktos Roussos of Polygreen, a company that provides emergency response for oil spills. Some are used beyond that period and can pose an environmental threat, especially if they’ve been neglected, he said.

“There are still a few FSOs and FPSOs out there in the world that are no longer in operation and have been left without maintenance or observation.”

Some such vessels are already causing concern.

The Safer, moored off the coast of Yemen, was built the same year as the Trinity Spirit. It holds over a million barrels of crude. The payload is in danger of leaking from its “fragile” hull or if struck by a missile fired in the conflict area, according to Greenpeace.

The environmental group published a 40-page report in December that outlines potentially “catastrophic” environmental, health and economic liability posed by the ship, which has been deteriorating.

Brazil accounts for about half of the vessels that are active that were originally built more than 40 years ago but those carriers haven’t experienced issues anything like on the scale of the Trinity Spirit.

The nation’s state-owned oil company Petrobras operates in compliance with company standards and regulatory guidelines, a spokesman said. Public plans include replacing platforms at some fields with new FPSOs. It considers their age to be from the moment they were converted, not when they were first constructed.

In 2019, the company reported cracks in an FPSO, the Cidade do Rio de Janeiro, which resulted in a leak of oil. The vessel was originally constructed in 1986 and converted in 2006. It has been decommissioned and the incident was investigated in detail, which has led to improvement in the management of all other units to avoid any recurrence, the spokesman said. Maintenance and integrity plans for Petrobras platforms follow all operational phases, he said.

Newer ships can also have issues. Last year, Venezuela’s state oil company also transferred crude from the FSO Nabarima, launched in 2005, after union leaders flagged the risk of a spill.

Conversion generally involves evaluations, upgrades and integration, which makes the time since that was last done also very significant, “considering the fact that many accidents are caused by aging equipment and degrading system integrity,” according to Rystad’s Wu. “Continuous monitoring, maintenance and repair are very important.”