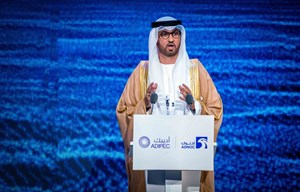 "His response was reassuring," Al Jaber said. "He told me, ‘We cannot ignore the realities on the ground. We need to face them. We don’t shy away from challenges. We address them by adopting a positive mindset and by working out solutions with like-minded partners.’ And then he added: ‘And remember, pursuing progress is in our DNA.’”

Al Jaber, who also serves as chairman of Abu Dhabi Future Energy Company (Masdar), noted that “energy is everybody’s top priority” today as the global energy landscape goes through what he described as “a perfect storm”. He argued that now is not the time to point out that long-term under-investment in oil and gas has made a difficult situation even worse, as “the data is clear.”

“If we zero out hydrocarbon investment, due to natural decline, we would lose 5 million barrels per day of oil each year from current supplies. This would make the shocks we have experienced this year feel like a minor tremor," Al Jaber said. "If this year has taught us anything, it taught us that energy security is the foundation of all progress – economic social and climate progress.”

“Our world is on its way to being home to 9.7 billion people by 2050," he said. "To meet their needs, the world will have to produce 30 percent more energy than today. And as we meet that need, we will be helping to bring electricity to almost 800 million people who don’t have it today. We will also be helping to transform the lives of the 2.6 billion people who have no access to clean cooking and heating fuels.

Given these future energy demands, Al Jaber said, the world needs "all the solutions it can get." He advocated an all-of-the-above strategy to include oil and gas, solar, wind, nuclear and hydrogen, plus the "clean energies yet to be discovered, commercialized and deployed."

“The world needs maximum energy, minimum emissions. This is why our leadership decided to be a first mover in renewable energy, over 16 years ago by launching Masdar. It’s why we were the first country in the region to deploy nuclear power. And it is why ADNOC is making today’s energy cleaner while investing in the clean energies of tomorrow,” Al Jaber said, as he pointed out examples of the steps ADNOC is taking to decarbonize its operations.

“At ADNOC, we have connected our operations to zero carbon nuclear and solar power. We are electrifying our offshore operations to cut their carbon footprint in half. And, we are pressing down harder and harder on our methane intensity, even though we already have one of the lowest levels in the world. Maximum energy, minimum emissions.”

Moving forward, technology will be one of the greatest enablers of the oil and gas industry, and this is an area where the industry can amplify and accelerate its impact, according to Al Jaber.

“Take carbon capture and storage. It is one technology we can take to scale, not just in our industry but across all industries. And then there is hydrogen.  Just a few days ago, I saw the first shipment of ammonia arrive from the UAE to Hamburg Germany. It felt like a historic moment. It was a first step in creating a hydrogen value chain and an important step in taking yet another opportunity for our industry,” said Al Jaber.

“We need to hold back emissions, not progress. The world is looking for solutions and I believe the energy industry can unite a divided world in finding them. I believe that the future is forged by those who make the first move. So today, I extend an open invitation to all our partners and friends around the world. Let’s make that move together and forge that future,” Al Jaber said.

ADIPEC is the global energy industry’s most influential meeting place where ministers, energy leaders, and professionals convene to engage and identify opportunities that will unlock new value in the energy landscape.

The event, which ends Thursday, includes more than 2,000 exhibiting companies as well as 28 international country pavilions.