(Bloomberg) --Libya expects its oil production to drop by another 200,000 barrels a day over the next week as workers try to fix a damaged pipeline.

The latest outage comes less than two weeks after militias shut down the OPEC member’s biggest field, Sharara, causing output to fall by around 350,000 barrels a day. Together, the closures will reduce Libyan production to about 700,000 barrels a day, the lowest in more than a year. 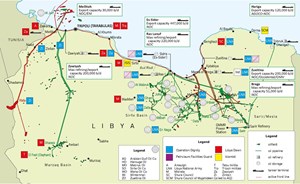 Any sustained drop from Libya, which sits on Africa’s biggest oil reserves, could counter efforts by the Organization of Petroleum Exporting Countries and its partners to boost exports. OPEC+ meets on Tuesday and is likely to proceed with another monthly increase of 400,000 barrels a day, according to a Bloomberg survey, as it restores supplies halted during the coronavirus pandemic.

Libya’s state-owned National Oil Corp. said late Saturday that the main pipeline linking the eastern Samah and Dhuhra fields to the country’s biggest export terminal, Es Sider, will be shut for maintenance. It said the pipe will be working again in a week.

Libya pumped 1.2 million barrels a day on average last year. The NOC has warned it lacks the funds needed to sustain that level of production, let alone reach its target of 2 million barrels per day within six years.

The government is trying to attract billions of dollars of investment from foreign energy companies, including France’s TotalEnergies SE and Italy’s Eni SpA.

Oil facilities can no longer be properly run because of “the large number of leaks” and “the consequences of illegal closures in the past years,” the NOC said in a statement. It also blamed lawmakers for failing to sign off on a budget for the company for the past two years.

Fighting between rival factions in the country, which has been at war or in chaos for much of the past decade, has hindered efforts to increase output. Last month, Libya delayed a presidential election meant to end political divisions and help stabilize the energy sector.