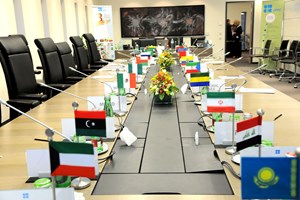 (Bloomberg) - OPEC+ abandoned its meeting without a deal, tipping the cartel into crisis and leaving the oil market facing tight supplies and rising prices.

Several days of tense talks failed to resolve a bitter dispute between Saudi Arabia and the United Arab Emirates, delegates said, asking not to be named because the information wasn’t public. The group didn’t agree a date for its next meeting, according to a statement from OPEC Secretary-General Mohammad Barkindo.

The most immediate effect of the breakdown in talks is that, for now, OPEC+ won’t increase production for August, depriving the global economy of vital extra supplies as demand recovers rapidly from the coronavirus pandemic.

However, the situation is fluid and the group could reactivate talks at any moment. With prices up about 50% this year and climbing toward $80 a barrel, the cartel may feel pressure from consuming countries concerned about rising inflation.

The outcome is a significant failure for the cartel. Relations have soured between two core members of the Organization of Petroleum Exporting Countries to such an extent that no compromise was possible. It damages the group’s self-image as a responsible steward of the oil market, raising the specter of the destructive price war that caused unprecedented price swings last year.