HOUSTON (Bloomberg) --Exxon Mobil’s knockout second-quarter results did little to entice investors because much of the extra cash coming from soaring energy and petrochemical prices will be used to pay down debt rather than reward shareholders.

The oil giant and rival Chevron Corp. swung to their biggest profits since pre-pandemic days, fueled in large part by stellar performances from their chemicals units. But the legacy of 2020’s near-40% jump in net debt was all too clear for Exxon, with Chief Executive Officer Darren Woods prioritizing balance sheet repair over share buybacks. Exxon stock slumped more than 2% on Friday.

Chevron joined European rivals Royal Dutch Shell Plc, TotalEnergies SE and Eni SpA in reviving buybacks, seen as an important mechanism for returning high commodity prices directly to investors. Exxon’s Woods said investors’ “explicit feedback” would be incorporated into strategic planning after he lost a proxy battle that saw a quarter of directors replaced earlier this year. He was non-committal when asked whether this meant additional shareholder returns. 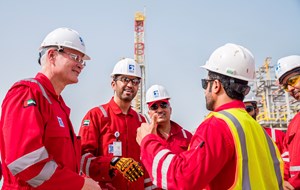 “I wouldn’t see huge shifts in the strategy but you may see accelerations, additional emphasis in areas,” Woods said during a conference call with analysts on Friday. “Restoring the strength of our balance sheet, returning debt to levels consistent with a strong double-A rating” is key.

In contrast, Chevron announced that share repurchases will be revived during the current quarter at a value of between $2 billion and $3 billion a year. That’s around half the amount it devoted to the program before it was suspended in early 2020.

“It says we’re confident in the future,” Chief Financial Officer Pierre Breber said in an interview. The level of buybacks was chosen because “it really is a range that allows us to also continue to pay down debt.”

Stock repurchases are being revived or raised across the board as sectors as diverse as steelmakers, retailers and manufacturers ride the crest of economic expansion. In particular, Big Oil executives are seeking to reward shareholders as commodity prices rise, a turnaround from previous booms when excess cash was poured into costly growth projects.

Faced with enormous climate challenges, the industry is attempting to entice investors by offering strong returns at a time when the dividend yield of the S&P 500 Index is at the lowest in almost two decades.

The lack of buybacks by Exxon overshadowed the $4.69 billion in profit it reported for the second quarter, the best period since late 2019, as its chemical division turned in a record performance. Chevron’s $3.1 billion second-quarter net income was its strongest showing since the start of 2020.

The companies’ combined cash flow from operations approached $17 billion, signaling an across-the-broad recovery after the dark days of 2020 that saw the titans of American oil incur massive financial losses.

Exxon paid down $2.7 billion of debt in the period but net borrowings still stand at about $57 billion, almost 20% higher than the first quarter of 2020. At the current rate of free cash flow, Bloomberg Intelligence analysts Fernando Valle and Brett Gibbs say it would still take the company a year to whittle debt to pre-pandemic levels.

“No doubt that higher oil prices and chemical margins have provided some relief to ExxonMobil versus where the business was six months ago, but the pathway back remains a narrow one,” Citigroup analyst Alastair Syme wrote in a note. “Equity was prioritized in 2020 – the balance sheet paid for the dividend – and now to repair that damage” capital spending needs to remain low.

On Friday, the company said full-year expenditures would be at the low end of the previously announced $16 billion-to-$19 billion range.

Exxon posted adjusted earnings of $1.10 a share, exceeding the 97-cent average estimated among analysts in a Bloomberg survey. As for Chevron, it earned $1.71 a share, on an adjusted basis, during the second quarter, trouncing the $1.60 average estimate.

Chevron’s repurchasing program comes on top of a dividend increase earlier this year, becoming the only Western oil supermajor to lift the payout above pre-pandemic levels. The company also shaved about $1 billion off its previous full-year capital spending estimate of $14 billion.

Even with recent increases, Shell’s and BP Plc’s dividends still lag pre-Covid-19 payouts. Exxon held its dividend steady earlier this week. Key to Chevron’s strength is that it entered the pandemic in a stronger financial position than rivals, with a low debt burden.

The buyback also signals a bullish outlook. CFO Breber said the repurchases will be sustained even during periods of lower oil prices. “I was clear on last quarter’s earnings call that we would start a buyback when we were confident we could sustain it over the cycle,” he said. “We’d want to sustain it for multiple years.”