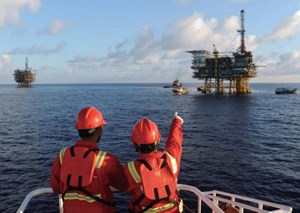 (Bloomberg) --Oil fell for a second session after a rally that saw prices hit $70 a barrel in New York for the first time since October 2018 faltered.

Futures dropped back below $69 a barrel on Tuesday. That mirrored wider markets where the dollar rose and U.S. equity futures pared gains as the recent surge in various assets brought on inflation concerns.

Still, in the oil market there’s confidence in the demand outlook with accelerating vaccinations allowing people to travel more. The Middle Eastern Dubai benchmark is trading in its strongest backwardation -- a market structure that indicates supply tightness -- in almost a year.

Crude’s advance from the worst of the virus has stalled a handful of times this year, but prices have usually returned to an upward track as overall global demand keeps improving. The Covid-19 comeback in Asia and parts of Latin America, however, is a reminder that the rebound will be bumpy.

While consumption improves, the Organization of Petroleum Exporting Countries and its allies are returning some stalled supply to the market. The group is looking at prospects for demand growth later this year and the potential lifting of U.S. sanctions on Iranian oil before deciding on output policy beyond July.

Negotiations between Iran and world powers over reviving a nuclear deal are entering a decisive phase, according to the agency monitoring the Persian Gulf nation’s atomic sites.

“From a demand perspective there is good news with many lockdowns being eased,” said Hans van Cleef, senior energy economist at ABN Amro. “But OPEC+ is hesitant to add production and export to the market as it is still unclear whether Iran will come back or not.”

While the market structure in the Middle East is firming, the equivalent gauges for Brent and WTI have eased in recent days. Still, both benchmarks remain in a backwardated structure, indicating tight supply.