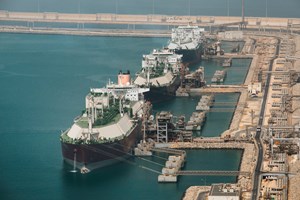 (Bloomberg) --Natural gas markets around the globe are rallying as the world’s importers have come to a stark realization: there isn’t enough supply to go around.

A long, frigid winter drained gas stockpiles from Louisiana to Germany, and utilities are struggling to build them back up. But unforeseen supply disruptions and a rebounding global economy are making it impossible to keep up. That’s setting up a desperate scenario as hot summer temperatures approach, and it’s bound to get even worse when demand peaks this winter.

Higher gas prices will make it more costly to keep the lights on in Madrid or cool apartments in Tokyo, after scorching heat waves in some regions are already making it more expensive to run air conditioners. The cleaner-burning fuel is the latest commodity to add to the global inflation scare as the price of everything from crude oil to corn and copper surge.

If a gas deficit does develop during the winter months, it could spur European utilities to burn more coal, which has already started happening, and cause China’s power producers to curtail supplies to industries and cause blackouts like it did last winter. Households are set to pay sky-high utility bills and the worst-case scenario -- albeit unlikely -- is they won’t have heating or electricity when freezing temperatures hit.

“Supplies are already very tight, and that could get much worse if there is a cold winter,” said James Whistler, the global head of energy derivatives at Simpson Spence Young, an international commodity and ship broker. “We are seeing strong competition between Europe and Asia, and that is manifesting in the continuous rally.”

European gas inventories are the lowest in more than a decade for this time of year, with the region’s benchmark surging to the highest in almost 13 years, while rates in the U.S. and Asia have jumped to the highest seasonal level in years.

The gas sector had long been segmented between geographical regions, but the ramp-up in new supply of liquefied natural gas and growing liquidity in spot trading over the past several years has helped transform it into a genuinely global market. That evolution comes at a price, as Europe and North Asia now compete for a finite supply of LNG, which results in bidding wars that catapult spot rates.

At the center of the action is China, which in a surprise move is set to overtake Japan as the world’s top LNG importer for the first time this year. China is stockpiling supplies of the super-chilled fuel in order to power its booming economy and help it shift away from dirtier fossil fuels.

“China’s LNG demand in the past years keeps outperforming even the most bullish analysts,” said Henning Gloystein, global director of energy and natural resources at consultants Eurasia Group.

The mad dash is putting Europe at a major disadvantage, as Asian end-users increase prices to attract supplies away from the Atlantic. Europe -- where spot prices have rallied by more than 65% this year -- is facing thin gas inventories amid lower flows from pipeline suppliers and near record carbon prices.

Europe’s end-users have been forced to depend more on Russian pipeline supplies. Yet Gazprom PJSC’s unwillingness to ship extra gas via Ukraine has been one of the key factors that has catapulted prices at the Dutch Title Transfer Facility, the spot benchmark for Europe, to the highest level since 2008.

“We see TTF prices rising for the remainder of 2021 as Asian LNG demand is robust,” said Santosh Gupta, assistant manager at Drewry Maritime Financial Research. “I don’t see a catalyst in the short term that would bring down prices.”

Indeed, the situation is made worse by the energy demands caused by extreme weather -- from last winter’s bitter cold in Asia to the current heat waves in the Western U.S. and severe droughts across the globe that have curbed hydro output.

With fresh memories of record-high Asian spot LNG prices last winter, the world’s top importers in China, Japan, South Korea and Taiwan have been busy buying shipments for delivery between November and February, well ahead of normal, according to traders surveyed by Bloomberg. China’s importers were scolded by the government for not being well prepared last winter and they don’t want to make the same mistake twice, traders said.

The Japanese government last month asked utilities to ensure stable fuel supplies this summer and winter amid forecasts for abnormally thin power reserves. Traders at Japan’s biggest importers said that they have been under more pressure to stock up on fuel and even restart retired gas-fired power plants.

There isn’t enough fresh LNG supply to meet this growing demand. The market had become accustomed to a steady stream of new mega-export projects, but the industry is currently in the midst of a lull period, where the next raft of new supply isn’t expected until the middle of the decade.

In the U.S., the so-called Henry Hub futures prices have more than doubled over the past year to the highest seasonal level since 2014. Inventories are 5.8% below normal for the time of year, the widest deficit since 2019 on a seasonal basis, signaling tighter supplies for next winter.

Shipping restraints could also add to winter woes. The odds of congestions at the Panama Canal are “very high,” which will force U.S. LNG cargoes en route to Asia to take longer passages around the Cape of Good Hope or the Suez Canal, limiting availability, according to Oystein Kalleklev, chief executive officer of shipowner Flex LNG in Oslo.

To be sure, there are a few factors that could help the global gas market avoid a crunch this winter.

An early start of the Nord Stream 2 pipeline, which connects Russia to Germany and has faced delays because of U.S. sanctions, could add much-needed supply to Europe and help the region avoid a crunch. Still, while pre-commissioning work is currently under way, the timing of first flow remains uncertain.

Likewise, a milder winter could reduce gas consumption and help utilities coast along with their lower inventory levels.

“Weather will have the final word on both price levels and volatility patterns,” said Gergely Molnar, an energy analyst at the International Energy Agency.

Meanwhile, traders may be forced to adapt to this volatile market as the supply deficit isn’t expected to disappear anytime soon.

“Supply will likely remain tight for the next two or three years as the industry makes up for the lack of new supply investments in 2020 and catches up with robust demand growth,” said Whistler.