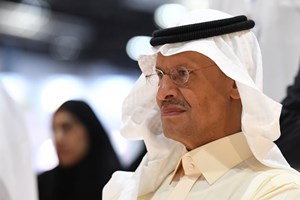 (Bloomberg) --A new supercycle in global oil prices could be triggered by a lack of new investments in exploration, Saudi Arabia’s energy minister said.

Prince Abdulaziz bin Salman, who’s been warning speculators of the hazards of bearish bets, told the Robin Hood Investors Conference on Wednesday that his job is to prevent such a supercycle, according to people familiar with his comments.

The comments mark an attempt by Prince Abdulaziz to reach out directly to Wall Street, speaking to an audience of hedge funds in rare move for a Saudi royal. Previous oil ministers tended toward closed-door discussions with influential market voices such as commodity hedge funds.

“I think it’s my job, and others’ jobs, to make sure this super-cycle doesn’t happen,” the prince said. He also warned that there is a risk of a supercycle due to “lack of investing.”

After back-to-back oil busts, some national oil producers and international exploration companies have scaled back drilling budgets to conserve cash and avoid a new supply glut. The prince is among those who worry the reductions may have gone too far and lead to a tightening of crude supplies as demand rebounds.

International crude futures have surged 43% so far this year, on track for the strongest annual performance in half a decade as economies emerge from pandemic lockdowns and major exporters exercised restraint in lifting oil output.

Benchmark Brent futures rose as much as 1% to almost $75 a barrel on Wednesday, the highest price since April 2019.