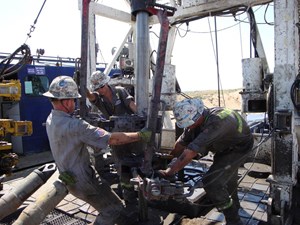 Shale drillers in the Permian basin

Biden’s order called for a 60-day pause during which the Interior Department would conduct a “comprehensive review” of its leasing program. The president said the agency should consider its “broad stewardship responsibilities,” including the impact of global warming.

Oil industry advocates cheered the ruling after warning that any long-term halt in leasing jeopardizes jobs and domestic energy production. Environmental groups countered that the judge’s order fails to account for the damage done by climate pollution.

The Interior Department said it’s reviewing the ruling and will comply with it.

The agency said it’s working on an interim report that will “outline next steps and recommendations for the department and Congress to improve stewardship of public lands and waters, create jobs and build a just and equitable energy future,” according to an emailed statement.

Doughty’s ruling requires the Interior Department to immediately restart its leasing program, even as the agency continues its review of the effects of drilling.

Additionally, the judge ruled that two existing laws — the Outer Continental Shelf Lands Act and the Mineral Leasing Act — require the Department of Interior to hold periodic lease sales of available land for oil and gas production, which the department has not done since the beginning of this Administration.

Tim Tarpley, senior vice president and general counsel of the Energy Workforce & Technology Council said the judge’s decision “confirmed what we have known since January — the Biden administration does not have authority to ignore the law and unilaterally stop oil and gas leasing on federal lands in the United States.”

Doughty, appointed to the bench in 2018 by former President Donald Trump, ruled that Biden’s executive order violated federal laws governing oil and gas leasing. He also faulted the Biden administration for failing to offer “any rational explanation” for its pause.

”Millions and possibly billions of dollars are at stake,” Doughty wrote. “Local government funding, jobs for plaintiff State workers, and funds for the restoration of Louisiana’s Coastline are at stake.”

Doughty refused in May to allow environmental groups to intervene in the case, saying that the Natural Resources Defense Council, Healthy Gulf and other groups hadn’t shown that federal government lawyers wouldn’t adequately represent their interests.

A similar challenge by oil and gas industry groups to the leasing pause is pending in Wyoming.