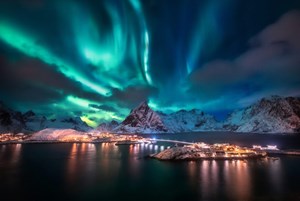 OSLO (Bloomberg) --Climate activists that failed in their attempt to stop oil and gas drilling in Norway’s Arctic are taking the case to the European Court of Human Rights.

The activists repeatedly lost their case within Norway, ending with the Supreme Court’s dismissal of their attempt to halt Arctic oil exploration in December. The decision to take the fight to Europe follows a legal victory for climate groups against Royal Dutch Shell Plc in the Netherlands, and a report from the International Energy Agency concluding the world can only achieve net-zero emissions if the development of new oil fields stops immediately.

“The oil industry and the oil-friendly parties’ bible has been the IEA reports,” said Frode Pleym, leader of Greenpeace Norway. “The IEA has now been clear on what we need to do to achieve the goals from Paris: that is to stop exploring for more oil.”

Norway, Western Europe’s biggest producer of oil and gas, has fought a long legal battle against Nature and Youth and Greenpeace -- two of the nation’s biggest environmental organizations -- over drilling licenses in the Barents Sea.

Only one oil field is producing at the moment in Norway’s Arctic waters, but several others are under development. Companies including Equinor ASA, Aker BP ASA, Var Energi AS and Lundin Energy AB are currently active there. The Norwegian Petroleum Directorate believes most of the nation’s undiscovered resources are located in the Barents.

There’s growing political pressure in Norway to restrict oil and gas drilling, but the government remains committed to the industry. A paper on the future of energy published last week said oil policy wouldn’t be changed at all, despite a greater focus on renewable energy.

The government argues that Norway can fulfill its obligations under the Paris climate agreement while continuing to pump oil and gas. The climate activists hope the court in Strasbourg, France will find that doing so breaches their human rights.

The Sami people indigenous to northern Norway are already losing their way of life because of rising temperatures, said Ella Marie Haetta Isaksen, one of the activists involved in the case.

“My parents are fishing salmon every year, but because of climate change we can’t do it anymore,” Isaksen said. “It affects a large part of their nutrition.”

In the original lawsuit, the plaintiffs argued that new oil drilling in vulnerable areas in the Barents Sea was in violation with Norway’s constitution’s article 112, which states that “every person has a right to a healthy environment.” In Strasbourg, the activists will say that new Barents drilling is a violation of Articles 2 and 8 in the European Convention on Human Rights.

It’s not given that the court in Strasbourg will accept the application from the activists. If they do, it could take a long time before the case is concluded.

“It could take between one and five years,” Pleym said. “But for us, it would be a victory in itself if they’re accepting the case”.