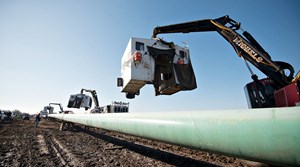 WASHINGTON and CALGARY (Bloomberg) - Environmentalists emboldened by this week’s defeat of Keystone XL are pressuring President Joe Biden to revoke permits for other oil and gas pipelines, warning their votes depend on the administration blocking fossil fuel infrastructure.

“If you need and want us -- as I know the Biden team does -- to come out in stronger numbers for 2022, then you have to do right by our community,” Jane Kleeb, the president of Bold Alliance, who spent more than a decade battling TC Energy Corp.’s Keystone XL, said in a call with reporters Friday. “You have to stand up to these big oil and fracked-gas pipelines and say ‘no more.’”

Pipelines have been a focal point in the fight against climate change, putting leaders such as Biden and Canada’s Justin Trudeau in a tough spot as they pledge to help cut global carbon dioxide emissions at a Group of Seven summit in the UK. The U.S. is the world’s biggest producer and consumer of oil, and it’s still unclear how plans to wean Americans off gasoline will pan out. Canada holds the world’s third-largest crude reserves and its economy benefits enormously from their development.

Environmentalists and indigenous groups in both countries are putting mounting pressure on the two leaders to stop pipeline developments, with protests in Minnesota against Canadian giant Enbridge Inc.’s expansion of its Line 3 oil-sands conduit turning violent this week.

Other projects activists are targeting include Energy Transfer LP’s Dakota Access pipeline, which has been shipping crude from North Dakota’s Bakken oil field to Illinois for four years, and the proposed Byhalia Connection Pipeline, a joint venture between Plains All American Pipeline LP and Valero Energy Corp. to carry oil from Memphis to Mississippi.

The Enbridge project, permitted by the Army Corps of Engineers under former President Donald Trump, involves the replacement and expansion of an existing pipeline, which will enable it to carry 760,000 barrels per day of Canadian crude across about 350 miles on the U.S. side.

Opponents say it imperils indigenous land and watersheds throughout Minnesota, and they argue it is not compatible with Biden’s ambitions to combat climate change.

About 200 anti-pipeline activists were arrested after clashes with law enforcement along Line 3’s route through the state earlier this week, in an episode recalling altercations over the Dakota Access Pipeline in North Dakota. Activists are still camped at multiple spots along the pipeline’s path, with Winona La Duke, executive director of Honor the Earth, vowing to keep up the pressure. “We will be on the rivers -- protecting our rivers -- as long as needed,” she said.

Actress and activist Jane Fonda jokes with a fellow demonstrator during protests in Minnesota, on June 7, 2021.

Enbridge spokeswoman Tracie Kenyon said the protests are not impacting construction. “Our main focus is the safety of all involved -- our workers, first responders and the protesters themselves,” Kenyon said. “We respect everyone’s right to peacefully and lawfully protest. This project is about safety, and we remain fully committed to its timely completion.”

Environmentalists want Biden to direct the Army Corps of Engineers to revoke a critical water-crossing permit for Line 3. But doing so could spur a backlash from Canadian politicians, especially following the president’s rejection of Keystone XL in January. Trudeau personally announced the authorization of Line 3 in 2016.

Sierra Club Executive Director Michael Brune said the administration has displayed an “inconsistent commitment” to addressing the issue and now faces a test: “Will these Trump pipelines become Biden pipelines? Will this administration fully meet its responsibility to respond to the climate crisis?”